Tell It to the Bees

For two-thirds of Annabel Jankel’s romantic drama, “Tell It to the Bees,” the story rolls along like many we’ve seen before. It’s a 1950s period piece about the forbidden love between two women and the small Scottish town where they live that’s ready to tear them apart with rumors and threats. Then there’s a third act that’s so wildly out of left field, it shifts the tone completely. It’s an almost comical departure, but it’s certainly a disappointing one.

In voiceover, an older Charlie (voiced by Billy Boyd but never seen) sends the audience back to his childhood days in 1950s Scotland. His mom, Lydia (Holliday Grainger), is a working woman after her war-shaken husband, Robert (Emun Elliott), has left the family. Despite the factory job, her earnings are not enough to support her and her son. At school, Charlie (played by Gregor Selkirk) is bullied but when he comes home, he finds his mom crying and tries to comfort her instead. After another rough fight with his schoolmates, Charlie is brought into to see Dr. Jean Markham (Anna Paquin), a kindly doctor who senses he’s in pain from more than just scrapes and bruises. She shares her family’s lore about the bees she keeps near her stately home, teaching Charlie how to tell his secrets to the bees and bond with them. Charlie unknowingly brings Lydia and Jean together, and the two find an unlikely source of comfort in their trying times: each other.

For those of us who like our historical dramas, “Tell It to the Bees” serves up plenty of the sub-genre’s hallmarks. Costume designer Alison Mitchell uses a soft but still colorful palette in her assembly of practical work dresses. Jean is usually shown in jewel tones, slightly more regal in comparison to Lydia’s fondness for pastels. It’s a costume choice that speaks to the women’s difference in class and personalities. Annie (Lauren Lyle), Lydia’s sister-in-law, is a fan of jean overalls and navy sweaters, and Lydia’s mother-in-law Pam (Kate Dickie) favors a faded factory smock. With hair and makeup at a minimum for just about everyone else in town, Jean and Lydia stick out with their gently styled curls and colorful dresses. No wonder their eyes catch each other’s attention.

Some of the film’s lovelier assets include the work of cinematographer Bartosz Nalazek. He captures the luscious greenery of the English countryside, the ever-grey skies, the drab homes and muddy streets of the town. Even in the midst of chaos, there’s a sense of calm in the naturalistic scenery. Claire M. Singer’s score keeps the music flowing alongside the buzz of bees.

Branching out from a music videos background, Jankel unfurls her story gently, taking in each awkward kiss, forbidden handhold or nervous glance. There’s no rush to get to the steamy part of the romance. Instead, the characters gradually earn each other’s trust and affection. Paquin’s performance comes across as cautious and anxious. Her character has lost at love and already suffered from her neighbors’ prejudices. She’s afraid to love in the way that Lydia is not. Grainger excitedly digs into those feelings of new love after her character conquers her initial reservations. Her energy helps carry “Tell It to the Bees” through its darkest moments.

What's likely to draw you to “Tell it to the Bees” is the couple at its center. Although they don’t get together until much later in the film, watching their tender relationship grow feels just as risky. I’m almost disappointed that Charlie takes up so much time away from their gentle courtship, but the real bump on the road is the film’s baffling third act. Adapting writers Henrietta and Jessica Ashworth change the end of Fiona Shaw’s book drastically, turning a gentle romantic drama into one where there’s violence against one of the woman characters and a back alley abortion. In one climactic moment, the bees are used as a weapon against an intruder. If it weren’t for the characters in the frame, I might have thought I accidentally flipped a channel. There’s one more deviation from the book that felt like a too bitter pill after watching a swarm of bees attack on-command. Even though I wasn’t familiar with what happens in the book while watching “Tell It to the Bees,” I could feel something was emotionally out of place. It felt like an avoidable misstep for such a tender story. 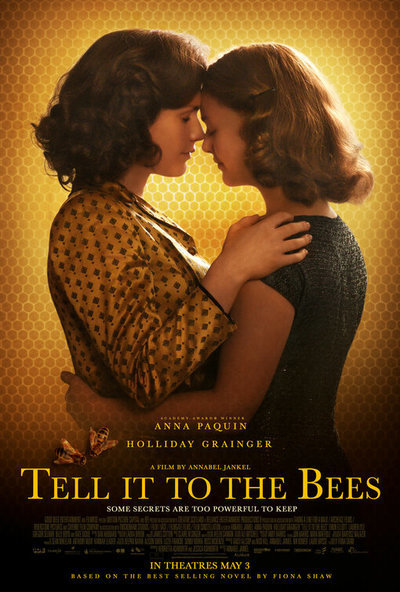