An incessantly chatty young Spanish woman, who is lucky enough to be among the 30 diners invited to the closing night of a hyper-exclusive Catalan restaurant, explains to her visiting Japanese table mates that the natives of her homeland "are a relaxed people."

However, judging by how little of consequence actually happens during each course of "Tasting Menu," the natives could actually stand to be a little more restless.

The only element that proves to be truly inviting on screen is the breathtaking coastal locale of Costa Brava in northeastern Spain, which is indeed a mecca for food lovers. But instead of focusing on gastronomic nirvana, this listless culinary drama feels and looks more like a glossy European travel commercial. You half expect the Travelocity gnome to show up in a corner with a glass of wine in his hand.

It’s not that director Roger Gual doesn’t make an effort to set a tempting table. There is, at least, what proves to be a too-brief-yet-tantalizing peek at the preparation of high-end cuisine before it is served to an international ensemble of actors (Ireland’s Stephen Rea and Fionnula Flanagan are the best-known headliners) as their characters become enmeshed in sundry interwoven personal stories during the momentous meal.

One by one, we are introduced to the main players as they prepare for the evening. An attractive, separated couple—Rachel (Claudia Bassols), a rising-star author, and Marc (Jan Cornet of Pedro Almodovar’s "The Skin I Live In"), a dedicated pediatrician—decide to keep their long-ago-made reservation despite a potentially awkward reunion. A recently widowed countess (Flanagan) puts her mourning on hold to partake in the event, complete with her husband’s ashes in tow.

A taciturn solo patron (Rea) causes maître d’ Max (Andrew Tarbet) to suspect he is an undercover critic. The aforementioned Asian gents are rival investors hoping to woo master chef and owner Mar (Vicenta N’Dongo, whose frustratingly parboiled performance makes one yearn for the fire-breathing antics of a Gordon Ramsay) to start over in Tokyo.

People argue but not loudly, a patron weeps yet silently, others become unlikely friends, one gets his just deserts, waiters are treated rudely, and an engagement ring and a come-on note are delivered to the wrong recipients. There is even a mishap at sea.

Yet nothing truly creates any emotional waves, and little seems at stake, no matter what potential disaster might seem to be in the offing.

And talk about empty calories. Save for a rather awkward margarita cocktail that is meant to be slurped from a long aloe leaf, there is hardly any lingering over—much less explanation about—the actual avant-garde morsels being served. Instead, there are fleeting glimpses of exotically gnarly shrimp, plates bearing crusty domes that require smashing and a mention of snail egg caviar.

The only time a diner is actually allowed to rhapsodize over a dish is when one of the Japanese men (Togo Igawa) savors a biscuit-like piece of pastry and says, "It reminds me of a summer evening when the rain makes way for a little chill in the air."

Other less poetic small-talk insights are shared, such as Mar’s observation to the troubled couple as she delivers a consolatory dish: "The emulsions only work when they are together." Subtle, huh? Or when the countess decides to play matchmaker and tells Rachel, "Make the most of it, dear, life is short."

Gual, who also co-wrote the script, obviously is more interested in providing recipes for life than he is in actually indulging in the joy of fine eating. But the one ingredient that "Tasting Menu" suffers the most from lacking is the common element found in abundance in almost all the great foodie film classics such as "Babette’s Feast," "Big Night" or even "Ratatouille". And that is passion.

It’s like offering French fries without salt. What is the point?

Complaints about such mediocrity in a restaurant would at least get you a free drink. Instead, you will have to find compensation in Flanagan’s divine smile, Bossols’ knockout tangerine gown, a great view and shots during the closing credits that—at long last—fully show off the food. 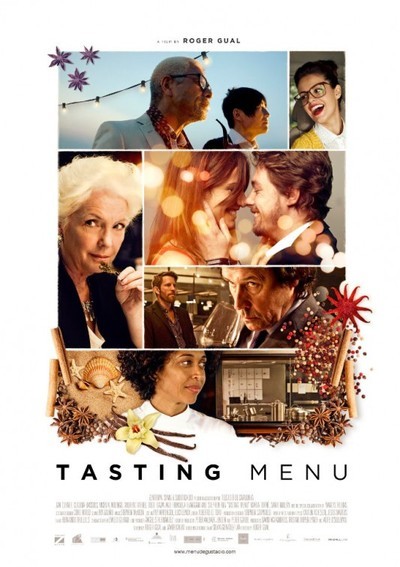