Don’t get too excited, fellas. Bibb’s character, Frannie, has been hit by a car, and much of her right side is braced up, and she must be practically supine for practically half a year. Resisting the entreaties of her bossy, old-school yuppie older sister—so old school she’s retreated with husband and family to the suburbs—Frannie insists on holing up in her fifth-floor apartment, right next door to a hunky guy who likes to work out to loud music, oh my. Said guy is played by Michael Stahl-David, who seems to be wanting to channel Bradley Cooper but keeps turning over Charlie Day instead. Such oddities of performance are features that make “Take Care” —written and directed by Liz Trucillo, co-author of the BOOK “He’s Just Not That Into You,” oh dear—eccentrically watchable but not exactly good. Anyway.

One might think that Frannie and Cooper-Day are destined for the romance this movie’s setup requires, but one would be wrong. In the midst of Frannie’s whingeing and near-sociopathic passive aggressive demands, and Cooper-Day’s Contemporary Urban Philosophy Musings—“When somebody asks me to do them a favor it’s like they’re squeezing the air out of my lungs,” OK buddy—we learn of a backstory. Frannie has an ex: Devon, or as he’s referred to early on “Devil,” who’s just made some kind of massive business deal (although the figure bandied about, $6 million, seems a little low for my own expensive tastes, frankly) and who apparently owes Frannie big time because she nursed him back to health some time prior to their breakup. Frannie lures Devon (Thomas Sadoski, trying so hard to underplay “finance professional” that he barely registers, really) to visit her and demands payback in the form of male nursing. This doesn’t sit well with Jodi (Betti Gilpin), Devon’s grasping and possibly lunatic girlfriend. Some form of attempted hilarity, of course, ensues.

The dramatis personae hews closely to the standards attached to the ostensible ultra-female-centric rom-com as defined by “Sex And The City” (a series for which Trucillo penned an episode)—gay best friend, a couple of non-white characters whose presence practically screams “I’m NOT an afterthought, honest!” —and so on. What exerts an odd fascination here is that each character heartily embodies a different variety of solipsistic creep; you start feeling sorry for the creators of the movie for having to live among such awful people. Then it dawns on you that the film’s creators don’t find these people awful at all —they find them normal. Terrifying, really.

“Take Care” moves briskly to its entirely predictable but nonetheless bizarre denouement, in which the heroine happily concludes that She Doesn’t Need That Guy Anyway, and then, of course, bags him. (Sorry, is that a spoiler?) It’s a peculiar journey, and Bibb is an appealing enough screen presence that she makes it less philosophically and aesthetically objectionable than it might have been had she not been in it, but it’s ultimately more of anthropological interest than aesthetic. 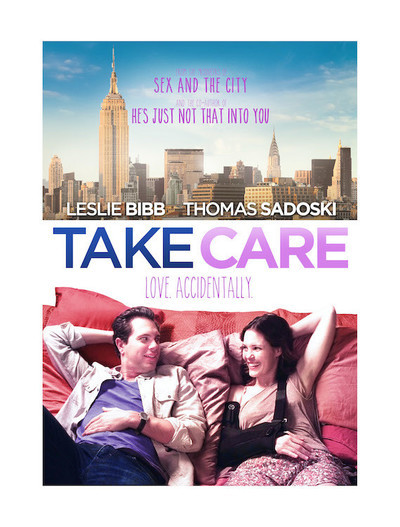