This French/Israeli co-production stars Tom Mercier, who here makes his film debut. The young man cuts a startling figure. A performer seemingly without a lot of inhibition, he gives his character Yoav a swagger no matter what his condition. Naked and cold, or dressed in a ridiculously colored topcoat, droopy-eyed and with a mouth that’s a permanent sultry hangdog pout, Yoav looks like he’s about to get in your face even in distancing long shot.

Apparently the character is a surrogate for the movie’s writer/director Nadiv Lapid, an Israeli filmmaker who experienced an identity crisis in his younger years. In “Synonyms,” Yoav, traumatized by a stint in the IDF and fed up with his country’s cruelty and hypocrisy—the movie’s title refers to all the French words Yoav learns to characterize his awful homeland—he arrives in Paris determined to wipe his religious and national identity clean and experience rebirth. In the opening he does just that, metaphorically. Disoriented, he enters an empty apartment and gives himself a bath; he emerges to find his clothes and backpack stolen. What, a metaphor? Certainly. The movie ends with a character banging on a door that’s permanently barred to them. It’s that kind of movie.

Yoav is rescued by a young, comfortable couple in the apartment above the one he bathed in. Emile (Quentin Dolmaire) and Caroline, aka “Lo,” are intelligent, secure, and settled. Such is this movies "art film overdetermination" that you know that Yoav is going to sleep with at least one of them. (And when the deed is indeed broached, the one says, “I’ve known this was going to happen since the first time I laid eyes on you,” what do you know.) They help him out, and he finds a wreck of a flat of his own, and, despite his wanting to renounce his ties to Israel, he finds himself hanging out with countrymen of his who wear black jackets and white shirts and do “security.” In his adventures he meets a photographer who subjects him to verbal abuse during a pornographic shoot, he rejects calls from a former girlfriend and physical visits from relatives, and kicks around speechifying and recollecting that traumatic time in the IDF. He’s asked why come to France when so many Jews are leaving France, and doesn’t have much of an answer.

“Synonyms” touches on a lot of themes, including that of The Jewish Disruptor, one which the American author Philip Roth got a lot out of. The fugitive echoes of Roth also bring to mind French director Arnaud Deplechin, who draws a lot from Roth (literally—one of the monologues in his great “Kings and Queen” derives from Roth’s Sabbath’s Theater) and the variety of visual approaches here, not to mention the overall frank attitude, sometimes make “Synonyms” come off like Junior Varsity Arnaud.

But the movie is, for all its accomplishments, sketchy, tentative. And there’s something about the conception of Yoav that smacks of self-aggrandizement. He’s a rude Candide, with some of the brutishness that Adam Driver brought to his grunty, deliberately non-articulate “Girls” character. He’s macho in a world that’s ever so slowly renouncing that quality, and he’s not in the least interested in adjustment. While that makes for a striking character within the frame for most of the movie’s running time, a climactic scene in which he upbraids a group of chamber musicians reveals the heart of dumbness that invariably animates such characters. 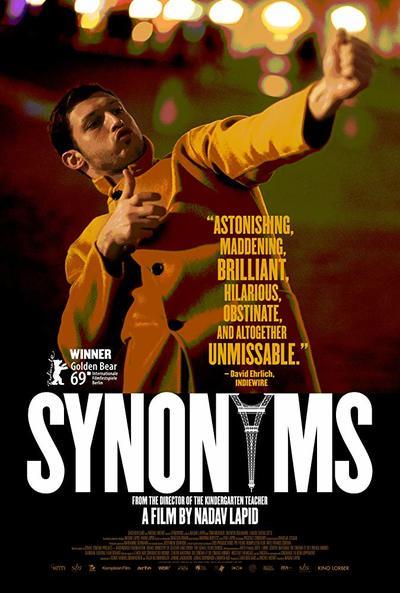