"Sword of Trust," about a group of eccentrics trying to sell an antique sword to some scary and dangerous people, is a throwback to the kind of rambling, character-driven, micro-budgeted indie flicks that used to be all over theaters in the 1990s.

Marc Maron plays Mel, the owner of a Birmingham, Alabama pawn shop who goes on the road with his spacey assistant Nathaniel (Jon Bass) and a couple named Mary and Cynthia (Michaela Watkins and Jillian Bell). Cynthia inherited a sword from their late grandfather that contains a barely comprehensible letter which seems to indicate that the former Confederate States actually won the Civil War, but the North devised a conspiracy to prevent knowledge of this from spreading throughout the Union. One possible lead is a gentleman named Hog Jaws (Toby Huss, one of the best-kept secrets in American acting), who's affiliated with a cult that you don't want to be hanging out with unless you're 100% on board with their lunatic fringe theories. Nathaniel is the one who uncovers the details. He's already immersed in non-rational thought, being a devotee of Flat Earth societies. ("You ever drive out near Kansas City?" he asks Mary.)

Movies like this rarely get a theatrical release anymore, partly because the industry has trained people only to leave their homes for gigantic movies based on very old commercial properties, but also because so many of the virtues showcased here have become subsumed within certain kinds of TV. Among the latter was Netflix's women's pro-wrestling series "GLOW," which gave Maron, an actor-musician-writer-podcast host and cult figure in his own right, a mainstream platform where he could reinvent himself as a hip yet curmudgeonly character actor. Warm but never pandering, he's turned into the sort of performer you're always happy to see, and he's thankfully all over this project.

Not coincidentally, "Sword of Trust" is directed by filmmaker-actor Lynn Shelton, a TV and movie switch-hitter who oversaw four strong episodes of "GLOW." Shelton also has a supporting role here as Deirdre, the ex-girlfriend of Maron's character, a perpetually backsliding ex-junkie who reminds Mel of a time when they lived lives of pure chaos. Shelton's specialty is character-driven comedy that favors odd pauses, suspicious euphemisms, and realistic conversational speed bumps—the sort of movie where you can't be sure how much of the dialogue is being performed word-for-word from a worked-over script and how much was improvised during rehearsals, or in-the-moment.

"Sword of Trust" feels the need to include a certain amount of rote wacky shenanigans and laboriously repeated bits of comic business (including the sellers trying to convince possible buyers that they share their conspiratorial worldview—why would this be necessary when you're merely selling an object?). But on the plus side, you get to see Mel during a meeting with a potential buyer and Bell's Cynthia, joining a cynical attempt to make the buyer feel understood, repeating a litany of indignities suffered by Confederate soldiers at the battle of Chicken Fist: "Cholera...Chlamydia....Deer ticks."

But for the most part, the acting and the characters carry the day. There are a lot of uncomfortably lifelike scenes in "Sword of Trust" where you feel as if you're privy to realistic (if mainly comedic) personalities going through moments of reckoning. One such moment occurs early on, when Deidre comes into Mel's pawn shop looking to sell some stuff. The loving yet anxious way the two interact is a perfect visualization of how former addicts relate to those who haven't quite built a comfortable home within sobriety. (It's also reminiscent of a memorable scene from Mike Leigh's "Secrets and Lies," where a mild-mannered portrait photographer is visited at his shop by a belligerent former partner, and in five minutes, you get a clear picture of why they don't work together anymore.)

The movie's showpiece is another pure performance moment: a scene where the four major characters are in the back of a panel truck driven by some unsavory characters, en route to (maybe) sell the sword in Tennessee. Bell and Watkins' performances peak as the characters talk about how they'd discussed having a baby, only to shelve the idea until they'd finished chasing their dreams. Then the camera stays on Maron in closeup as he talks about his years as a drug addict with Deirdre—the way he carefully distinguishes between the kinds of drugs they each did is a pure Maron moment—while the other three silently listen, also in closeup. It's rare that you see an American film that is essentially comedic placing so much faith in the landscape of the human face and the sound of the human voice. If the entire film were this focused and minimalist, it might have been a knockout. 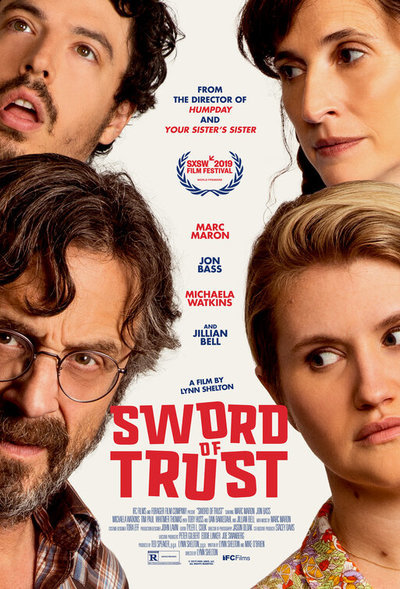