Eric Scott (Rob Brydon) works as an accountant. His job is numbingly boring. He strolls through life like an automaton. He is estranged from his ambitious wife Heather (Jane Horrocks), who has recently run for local office and won. She's busy. Eric is jealous. He barely deals with his kids. The man is in a slump. Until one day, while swimming laps at a local pool, he sees—underwater—a line of men sitting on the bottom. They appear to be gesturing at him. It is a men's synchronized swimming team, and after giving them suggestions on how to make one of their moves work—they lack an "apex variable" he tells them—they invite him to join their team. This is the premise of "Swimming With Men," a gentle low-key comedy directed by Oliver Parker ("An Ideal Husband").

"Swimming With Men" is inspired by a true-life story of a group of Swedish men who—feeling lost and lonely as they reached middle age—formed a men's synchronized swimming team called Stockholm Art Swim Gents. Men's synchronized swimming isn't really an official "thing," but there are teams and competitions, and the Art Swim Gents ended up competing in the world championships. (The journey of the Swedish team was featured in a documentary, "Men Who Swim.")

The men on the team in "Swimming With Men" are not, to put it mildly, athletic. They are all ages and come from all walks of life. There's silver-fox Luke (Rupert Graves), there's young tough Tom (Thomas Turgoose), there's gay Kurt (Adeel Akhtar), there's widower Ted (Jim Carter), construction worker Colin (Daniel Mays) and two other members who never speak, one of whom is nicknamed "Silent Bob." When Eric joins the group, he is given some rules, the first one being "We don't talk about Swim Club." There's also a rule about leaving your personal life at the door. The men go out for beers and hang out, but very little personal information is shared. This is perfect for Eric, who has been feeling unhappy, and is now living in a hotel, away from his powerful wife who's only interested in politics.

Much of this will call to mind "The Full Monty," but the comparison is not kind to "Swimming With Men." "The Full Monty" had it all. Each character was three-dimensionally drawn with fully-established conflicts (inner and outer), but what made the film really work was its commentary on the emasculating effect of unemployment and financial difficulties, and the super-charge of confidence that stripping gave these men. It was exhilarating. The film had so much to say about men, about the economic crisis in an entire class caused by the closing of steel mills in England, and it said all this with power and humor, never forgetting the absurdity of the entire enterprise. The ensemble work among the group of actors in "Swimming With Men" is very strong, with humorous asides, joshing, and banter that feels spontaneous (they are all very funny actors). But the film doesn't invest in them emotionally, and it's difficult to invest in Eric, whose behavior with his wife and son is selfish and unfair. If he's having a midlife crisis, "Swimming With Men" merely sketches it in.

Eric's journey lacks the emotional heft of, say, Dave's journey in "The Full Monty", the man (played by Mark Addy) who cringes away from having sex with his wife because his sense of self has been so shattered by lack of work. Addy makes the self-loathing so real that when he whips off his chaps in the final scene, and his wife in the audience screams with joy and lust for him, we get the catharsis of what this man is really doing, what it is he is in the process of reclaiming. Neither Eric nor any of the other guys in "Swimming With Men" have character arcs of the same urgency and power.

As the men practice their routines, challenges are set up—Tom's flip off someone else's shoulders, for example—that then don't pay off in the narrative. Think of Jane Fonda doing a back flip off the dock in "On Golden Pond." I saw the movie in the theatre and the audience erupted into cheers when she succeeded. There's no reason "Swimming With Men" couldn't generate the same response, but when we finally get to see the routine they've been working on all this time, Parker keeps cutting away to the audience, the judges, the swim coach (Charlotte Riley). He doesn't let us see the routine. He chops it up into small pieces, trying to whip up a sense of excitement with quick edits, but the excitement is in what the characters have accomplished, what these un-athletic humble men are pulling off in the pool. We aren't allowed to revel in their routine because Parker doesn't let us see it.

The Swedish team writes on their website, "When we started the only negative reactions were from some middle-aged men, like us." It's an intriguing comment, calling up the question why middle-aged men would have a negative reaction to other middle-aged men doing something as benign as synchronized swimming. Why is the sport only associated with bathing-beauties wearing lipstick? Who makes up these silly gender rules? "Swimming With Men" doesn't stroll into those more explosive areas, and the film suffers as a result. 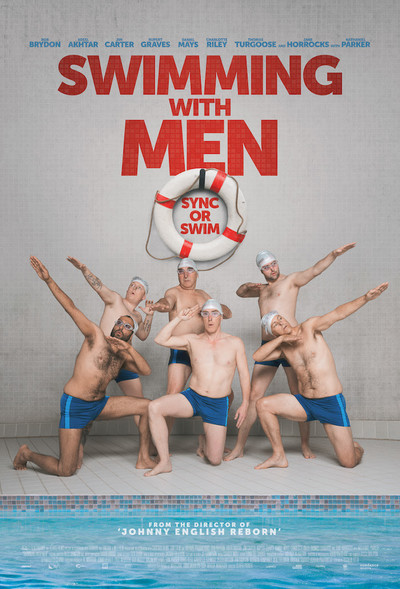