“Swan Song” works best in the small moments it creates for its main character, real-life hairdresser to the Sandusky, Ohio stars, Pat Pitsenbarger. I was moved by these little nuggets of digression; taken by themselves, they add up to a profound statement about how one generation’s struggle made life a bit easier for those who came after them. Unfortunately, the film gets derailed by tonal inconsistencies and a clichéd plot that undermines the strength of its memorable outlier sections. The trailer makes this look like a gay version of “The Straight Story,” but David Lynch was far more comfortable with his tangents, as he knew it’s about the journey, not the destination. Here, writer/director Todd Stephens’ script can’t help but keep reminding us that our protagonist is on a quest to make a mean, rich, dead Republican woman’s raggedy ass hairdo look presentable for her funeral.

Pitsenbarger, or “Mr. Pat” as he calls himself, is played by screen legend Udo Kier in a performance that, dare I say, is absolutely magnificent. In almost 300 screen credits, Kier has played all manner of roles that range from somewhat normal to extremely bizarre. “Swan Song” gives him one of his best parts, allowing him to go big without sacrificing his character’s humanity nor the melancholy lurking just beneath his glorious façade. Mr. Pat is flashy, fearless, and fabulous enough to make a ratty t-shirt and a fanny pack work as a fashion statement. Mr. Pat is also unflinching in his self-portrayal—he’s an unabashedly gay man who will turn on his showmanship at the drop of a hat, but not as any kind of defense mechanism; instead of keeping you at bay, it draws you closer and makes you giddy. You’re not laughing at Mr. Pat, you’re marveling at his audacity, wishing you had that level of confidence. And it makes you smile.

But Mr. Pat is also a relic, something he knows all too well, and Kier keeps that knowledge on an endless loop running in the background of his performance. The film calls attention to the end of an era by opening with the triumphant return of Mr. Pat to his gay bar performing days, only to suddenly have him wake up old and frail in a nursing home. No longer an in-demand hairstylist, he roams the halls of this infernal, grey place, occasionally being chastised by his nurse, Shaundell (Roshon Thomas) for sneaking puffs off contraband More cigarettes. I’ve said this before, but there’s no better prop for a movie star than a cigarette. Kier puts on a master class with those outdated, brown-papered tobacco sticks once famously marketed to women. As he does the hair of one of his neighbors, he lights two cigarettes as if he were Paul Henreid in “Now, Voyager,” tenderly giving one to his “client” as he murmurs how lovely her hair always was.

A wrench gets thrown in Mr. Pat’s routine by Mr. Shanrock (Tom Bloom), the lawyer for Rita Parker Sloan, the richest woman in Sandusky. Before they had a major falling out, she was Mr. Pat’s most treasured customer and his closest confidante. So, he finds it odd when Mr. Shanrock informs him that Sloan left a provision in her will that her hair and makeup be done posthumously by her former hairdresser. The request comes with $25,000 for the trouble, payable six months after the estate is settled. If this request is denied, she’ll go into the cold, cold ground looking like the Quaker Oats man. Mr. Pat is not interested at first, but eventually boredom and the notion of a last hurrah compel him to escape the nursing home and wander toward his former hometown.

Since he has no supplies, and Mr. Shanrock refuses to give him even a dime to buy products for the deceased, Mr. Pat has to employ clever means to get what he needs. One product he keeps looking for, which screams out as symbolism for being past one’s prime, is Vivante. I have no idea what Vivante is, but one of the Black hairdressers Mr. Pat meets informs him that “it doesn’t stick to nappy hair!” She directs him to another hairdresser, Dee Dee (Jennifer Coolidge) who runs a shop across the street from where Mr. Pat used to ply his trade. Turns out Dee Dee was a former disciple who went rogue and put her teacher out of business. Their confrontation is filled with sharp retorts and massive shade, but I found it too bitter to be funny. The two pros give their all, however, with Coolidge shining in a surprisingly dramatic role.

On his journey, Mr. Pat is haunted by David (Eric Eisenbrey), his deceased partner who died of AIDS. Seen as a young man in flashbacks that his elderly partner occasionally inhabits, David stands in for the many we lost to the epidemic of the '80s. He’s also a reminder that quite often, partners were not allowed any rights to their loved one’s belongings or their property. (“At least it’s not that way anymore,” says the new owner of the plot of land that once held the house Mr. Pat and David lived in.) Mr. Pat’s visit to David’s grave—the first time he’s seen it—is one of the most powerful evocations of grief I’ve seen in a long time. The small gesture Kier makes in this scene is emotionally overwhelming.

“Swan Song” is also a love letter to Sandusky and its residents, many of whom represent the changes in attitude brought on by the passage of time. Things are so out in the open that Mr. Pat tells his old friend Eunice (Ira Hawkins), “I wouldn’t even know how to be gay anymore.” He also talks to the young bartender at the bar that was once a safe haven for Sandusky’s gay men. The mixologist is amused by this old man spinning tales of the city’s original drag shows, though he at least gives credit to the folks who paved the way for him to be more safely nonchalant about his sexuality.

There’s also a fine scene with the thrift store worker who once spent a lot of money to have her hair dyed by the maestro. She thinks he doesn’t remember her, but after she outfits him in the incredible lime green ensemble he will don for the second half of the film, Mr. Pat tells her every detail about their prior interaction. That outfit, complete with hat and ascot, is worth the price of admission. It brings out such sparkling powers of mischief in Kier, as if Clark Kent had suddenly become Superman. The old rascal is back; even though he has a limp, those clothes bring out his youthful swagger.

Eventually, we must deal with the elephant, I mean Republican, in the room. Rita comes to life in a hallucination so Mr. Pat can battle it out with Krystle Carrington from “Dynasty.” The outcome is not only unsatisfying, it comes with her gay nephew Dustin (Michael Urie) saying his aunt told him “I have a gay best friend” when he came out to her, details that prove useless and feel condescending. Though Mr. Pat amusingly takes an earned pound of flesh at the film’s conclusion, I didn’t care about Rita or her damn hair one bit. “Swan Song” is an instance where I absolutely loved the character, but disliked how his story was ultimately told. Your mileage may vary. 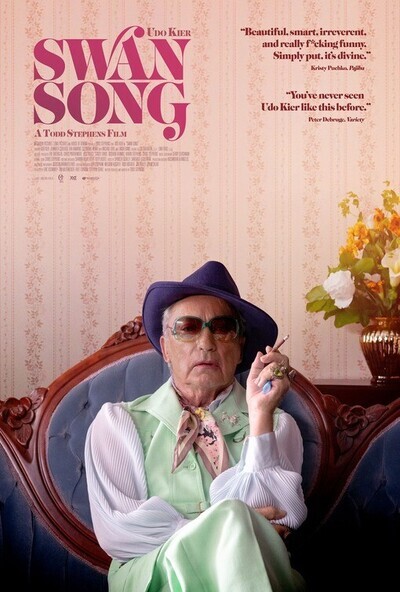