With “Swallow,” director Carlo Mirabella-Davis draws us into the domestic horror of a housewife. Against a backdrop of pink hues, Hunter (Haley Bennett), a soft-spoken new bride, finds her inner life spiraling. Born into a troubled home, Hunter has married into a picture-perfect wealthy family. Her acceptance, however, quickly becomes conditional on her obedience, as she spends long days in her husband's isolated modernist home, overlooking an endless forest.

The cracks start to show as Hunter develops a habit of swallowing inanimate objects. Inspired by a book that insists on the importance of spontaneity, she finds herself drawn to a marble. Pulling it to her mouth, she lets it roll along her tongue, rattling gently against her teeth. She swallows, and for the first time, she feels in control.

As Hunter's swallowing habit grows, represented by an ever-growing display of little objects on her mantelpiece, so does her sense of power. She can't keep her secret for long, though, especially as she soon discovers she's pregnant. The fleeting feeling of autonomy she has over her body soon gives over to her husband and his family. With her Hunter's already powerless role in the household further diminished, she becomes an incubator for the family legacy. What little power she had is also stripped down, and her every movement is tracked and annotated.

As the film's different threads come together, we come to understand how Hunter has never had authority over her own body. How, from a young age, her boundaries have been eroded. While she's worked hard to keep it together, unaware that she's been worn down and bent to fit the needs and desires of others, she reaches a breaking point.

Unlike many pregnancy-themed horror movies, “Swallow,” quite radically, doesn't linger on the monstrosity of the body and transformations that come with it. It is a film that inverses the typical trajectory by having a character begin in a state of subjugation, who slowly fights for ownership and freedom over her body and life. “Swallow” is an uncompromising horror that evokes deeply rooted alienation and dysmorphia. Hunter’s journey will take her on a path towards connecting the mind and body, even only briefly. Only Jonathan Glazer's “Under the Skin” does a better job of evoking the particular pull of being an outsider in your own body.

With crisp sound design, sure to trigger a mysophobia response, “Swallow” draws us into Hunter's bodily experience. Along with the striking sound, the film's visuals draw hard lines between the tense and rigid shapes of the modernist locations, with the soft, fragile lines of Hunter's face and body. The movie's contrasting color schemes, the pinkish womb-like glow, with the colder antiseptic tones of the oppressive outside world, allow us to relate to the experience of embodying Hunter's flesh, while also, often, feeling like a foreign invader.

As Hunter, Haley Bennett evokes a softer Betty Draper and, from the opening, her sweet apple-cheeked demeanor is never marked with expected signals of hysteria or unraveling. A testament to her intensity, she presents on the surface a frozen lake, while allowing just enough insight into her inner turmoil. The moments she tenderly yearns for her little swallowed objects offer the greatest purvey into the strength of the desires she has long squashed. Her inability to lash out, rather than be a signal of strength or control, mark the deep and complicated repression that plague her. While the film certainly has moments of catharsis, for the most part, it keeps them bottled up. Like Hunter, we are rarely allowed the opportunity for release.

In the grander scheme of feminist horror, “Swallow” subverts easy analysis and expectations. It is a far cry from the "rah-rah" feminist empowerment stories that end in blood-soaked revenge, as it explores the more intimate horror of being a woman and the delicate battles required to dig yourself out of hell. In his first feature-fiction, writer/director Mirabella-Davis showcases his potential by marrying disturbing horror images with an engaged, thoughtful political message. Without spelling things out or softening its final blow, “Swallow” ranks among the best films about the fight for female bodily autonomy in the contemporary era.

“Swallow” draws on how feminine perfection can so often be associated with self-destructive behavior. Hunter's beauty and her obedience are all linked to self-effacing sacrifices that are expected and admired until they rise to the surface. It's crucial for everyone who surrounds Hunter that the work of her perfection remains hidden, as she sacrifices her body for the pleasure and needs of others. When she stops feeding into that social narrative, the real horror begins. 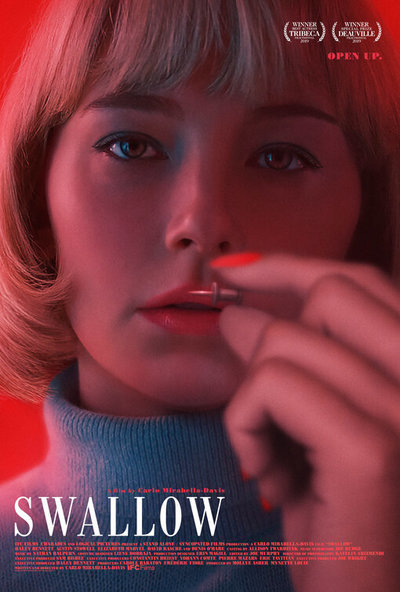 Rated R for language, some sexuality and disturbing behavior.