“His purity was a very attractive quality,” says an interview subject of Carl Boenish, the subject of this intermittently compelling but rather unfortunately titled documentary, directed by Marah Strauch. Boenish is—okay, there’s no point in being coy, the proper verb here is “was”—a founder of BASE jumping. BASE standing for “building, antenna, span, or Earth,” that last meaning a cliff. I guess if you didn’t capitalize it or acronymize it the term would still make sense, as you’re jumping off or from something that isn’t moving and hence could be considered a base. In any event, whatever you’re jumping from is pretty far up, and you’re using a parachute and/or wearing one of those glider getups. Don’t look at me, I’m afraid of heights.

But Boenish sure as hell wasn’t. The movie chronicles his love of skydiving from a very early age. He wasn’t just in love with the fall that simulated flying, he was passionate about chronicling what one saw from starting way up and shooting straight down. Boenish was a cinematographer who worked with director John Frankenheimer on his skydiving movie “The Gypsy Moths,” on which another BASE jumping pioneer, Todd Higley, worked. (Higley does not figure in this film.) Some of the best stuff in the movie derives from Boenish-shot footage—heights may be scary but they do tend to furnish some spectacular views.

Eventually, Boenish drifted away from Hollywood and pursued jumping full time, and with evangelical zeal. He started doing jumps off of Los Angeles skyscrapers, much to the consternation of the buildings’ owners. In interview footage he evinces a blithe, borderline glib disregard for rules of all sorts. Later in the film, we learn that Boenish had trouble walking fast and far because he’d broken his leg in one exploit, and refused to have it set because he was a Christian Scientist. I found it curious that he had so little regard for convention in one case, and stuck to the letter of religious doctrine under circumstances that must have caused him extreme pain. The movie doesn’t find this curious at all. The subject matter increasingly suggests a kind of cross between “Man On Wire” and “Grizzly Man,” but unlike “Grizzly Man” director Werner Herzog, director Strauch has little interrogative spirit. There’s no interest in exploring Boenish’s contradictions.

The interviewee who notes Boenish’s purity is his wife, Jean, who it seems turned out to be his greatest and most devoted disciple. The film’s last section focuses on a fateful 1984 trip to Norway, where Boenish jumps from a cliff face for a “Guinness World Records” television special hosted by David Frost and young Kathie Lee Johnson, now Kathie Lee Gifford and a rather more seasoned and terrifying TV presence. (Neither Frost, who died in 2013, nor Gifford, who appears to be alive, was interviewed for the film.) The jump recorded for the television special goes off flawlessly, while a jump Boenish does just for the heck of it does not. The editorial choices in this section go more than a little slack; we hear about Boenish’s bum leg more than three times in less than ten minutes. Reflecting on the events thirty years later, Jean has no apologies: “Everyone has his own real way of reacting. It will be individual. And BASE jumping encourages people to think as individuals…” BASE jumping is now considered a legitimate “extreme” sport, and Boenish’s widow thinks this is all well and good; extreme experience, she says, “is not unique to BASE jumping. BASE jumping is just a condensed version.” By this time in the film, the dramatic reenactments of events had grown pretty thick, which tried my patience; I also have to admit I found Jean Boenish’s philosophical musings less than persuasive. And I don’t think my fear of heights was the reason for my bias. 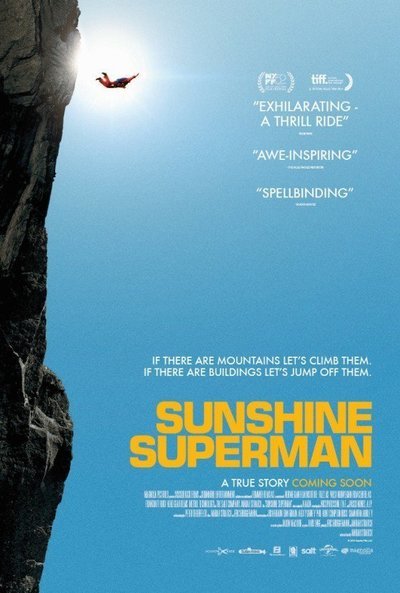 Rated PG for thematic elements, some language, smoking, and a brief nude image