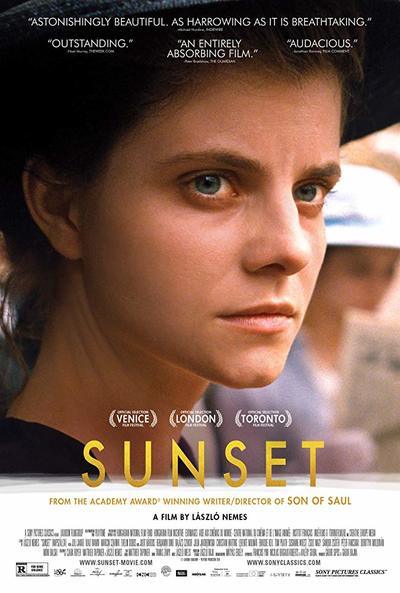 Unlike most costume dramas, "Sunset"—a moving Hungarian character study set in Budapest during 1913—isn't a movie you can easily get lost in. The movie's disorienting and visually austere style takes some getting used to: dark, but warmly lit hand-held cameras draw viewers' attention beyond the immediate foreground (almost always in focus) towards the camera frame's out-of-focus background. That kind of showy, subjective camerawork is a little daunting (Can't I decide where I want to look for myself?). But I have to admit: by consistently denying viewers an objective God's eye of events, writer/director Lászlò Nemes ("Son of Saul") also immediately establishes his movie's character-driven, low-key tense atmosphere. This is the world according to Irisz Leiter (Juli Jakab), an emotionally withdrawn young woman who struggles to understand and re-join a (high) society that she was never really part of. Irisz's point-of-view is sometimes a little stifling, and more than a little disorienting—but it's also rather powerful.

In that sense, your interest in Irisz's story depends on your willingness to feel your way around Nemes' visually elaborate, dialogue-light movie. Nemes and his team of collaborators—especially cinematographer Mátyás Erdély—put a lot of effort into choreographing and arranging Irisz's story (as it was scripted by Nemes and co-writers Clara Royer and Matthieu Taponier). And it shows in the way that Irisz, from her very first scene, struggles to assert control over her own story.

When we meet her, Irisz is already in a haze. An array of women's hats are presented to her, but she's not really interested in any of them. Irisz suddenly remembers why she came to this department store (which bears her estranged family's name): she's looking for a job. "You should have said so before," an employee sneers as she fetches her supervisor.

This introductory scene is a good table-setter: things just sort of happen to Irisz, so she has to constantly struggle to re-orient herself to the customs and niceties of the upper-class. Her parents have died under mysterious circumstances, so their department store is now run by strangers (to Irisz): Brill (Vlad Ivanov) and Zelma (Evelin Dobos), both of whom are only as cordial to Irisz as they need to be. Brill and Zelma do not have a position available for Irisz. They are also clearly intimidated by her; they often fidget and try to avoid her. And, when they can't avoid her, they make a big show of showing her off at social functions, if only to preemptively stop their neighbors from gossiping.

Irisz often has to insert herself into situations whenever she is not welcome (and that's often). She insists on asking unsolicited questions and refuses to be dissuaded, either by well-intended advice or inexplicable violence. Everybody tells her the same thing: there's no reason to dig up the past. Your parents died and your brother—the one that you never knew you had—is a disgrace. There's no fortune or security here in Budapest. Stop asking questions and go back to Trieste: this is not your world and you are not welcome here. But Irisz never considers going home and is therefore constantly threatened by unwelcome scrutiny and exclusion.

Thankfully, Irisz's story—determined as it is by her refusal to accept things as they are—is commendably presented without much hand-holding. She's not a prototypical feminist or an ahead-of-the-curve standard-bearer because she lives in a constant state of uncertainty and is therefore not particularly introspective. Instead, Nemes simply asks us to join Irisz as she struggles to be (and to see) more than she's allowed. So we follow Irisz, waiting in a constant state of low-level panic and hoping that whatever happens next isn't as bad as it seems. Nemes' suggestive, impressionistic approach takes some getting used to, but "Sunset" is worth the extra effort.