“A good movie is never too long, and a bad movie can never be too short.” That famous quote from Roger Ebert helps me explain why the Canadian indie comedy “Sundowners,” though it runs only 97 minutes, felt to me like it lasted 14 hours. Longer than “Lawrence of Arabia.” Longer than “Shoah.”

By Ebert’s rule of thumb, I am of course saying the movie is bad. But maybe it’ll take some of the sting off the pejorative if I add that it’s bad in a very unusual and distinctive way: It’s the only film I can recall in which every scene feels too long.

Well, let me amend that. Halfway or more through the story there’s a (mercifully!) short scene where the two main characters go to a restaurant and have a meal. (One later pukes as a result of this repast.) This scene feels about right in its length; unlike anything that came before, it doesn't wear out its welcome. And to be fair, the film’s torpid pace picks up thereafter and there are a few later scenes that don’t feel torturously and ineptly dragged out.

Written and directed by Toronto-based filmmaker Pavan Moondi, “Sundowners” concerns two thirtysomething Canadian friends who get an assignment to go photograph a wedding in sunny Mexico. Alex (Phil Hanley) is a photographer by profession but seems very discouraged by his circumstances and prospects. When his cartoonishly boorish boss (Tim Heidecker) gets him the Mexico gig, Alex enlists his similarly disaffected pal Justin (Luke Lalonde) to come along as his assistant.

I can tell you very simply the two reasons this movie is particularly bad. First, though Hanley and Lalonde seem like they might be very agreeable guys to have a drink with, they have no experience as screen actors; this is the first movie for both (Hanley is a comedian, Lalonde a musician). Second, and most crucially, they were allowed or encouraged to improvise.

I think I can hear the groans from thousands of filmmakers who read those words. As most people with experience in this art well know, improvised movies generally suck. If you have brilliant, practiced improvisers like Steve Martin and Chevy Chase, maybe not so much. But even those guys wisely depended on good scripts. Put newcomers like the two here in front of a camera, allow them to improvise and then, after your first three editors commit suicide, you end up with a movie in which every scene feels too long.

It takes 26 minutes for the movie to reach Mexico. Most movies with this one’s premise would dispatch with the Canadian set-up in five to seven brisk minutes, then head for the sun. “Sundowners” dithers through nearly a third of its length by having extended scenes between Alex and his boss where the basic points are made quickly, then the scene drags on and on. Then there’s the scene where Justin is confronted by his bitter ex-girlfriend; they have an argument that connects with nothing else in the movie but will test most viewers’ patience to the limit.

Things hardly improve when the guys reach Mexico (which is played by Colombia). There are clichéd hassles with cabs and finding the right hotel. But an especially indicative scene comes when the dudes try to find their room and can’t remember the number, so they wander around trying their electronic key on various doors, improvising desultorily all the way. One of them jokes that it takes them four hours to find the room, which might funny if it didn’t feel that long.

I will spare you any further plot synopsis. There are various vacation-gone-awry hijinks and misadventures with the wedding party and other vacationers, then our heroes go back to Canada. “Sundowners,” of course, is a kind of high-concept buddy comedy that Hollywood still makes. If it starred Owen Wilson or Seth Rogen, you could count on a certain quantity of actual laughs, which would result less from an ample budget than from more-than-competent writing, acting and directing. Which isn’t to suggest there’s no audience for Moondi’s film. Besides Canada boosters, it’s for folks who fetishize indie-style ineptitude and amateurishness. 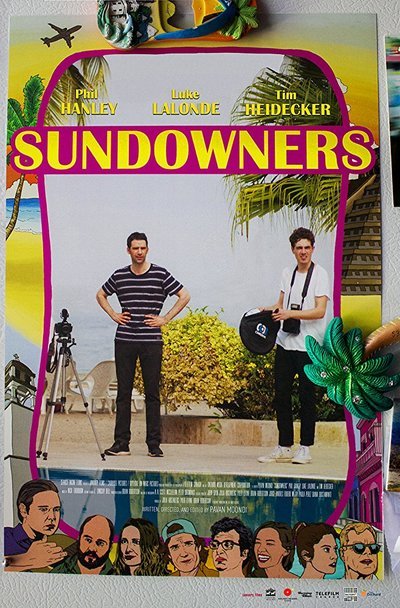