This is a crucial exchange in "Strawberry Mansion," a witty and thoughtful movie from co-writer/directors Kentucker Audley and Albert Birney, about one man's struggle to recognize the unreality of what is deemed accepted reality, and to embrace the logic of dreams over the morally compromised "real" world. This makes "Strawberry Mansion" sound pretty heady and abstract, but it isn't, not really. The film's metaphors are easily grasped, and the execution is whimsical and humorous, with strong internal logic as well as a big heart. It is only natural that James Preble (Audley) feels like he is losing his mind in the la-la-land of "Strawberry Mansion," when what is actually happening is he is finally seeing things for what they really are. His mind is free. "It's about time."

"Strawberry Mansion" takes place in 2035, and 2035 doesn't look all that different from now, although there are some new-fangled technological developments. Consumer-driven algorithms, in concert with powerful state-run advertising agencies, infiltrate people's dreams, via a little "air stick" hooked up beside the bed. The air stick tallies up everything seen and experienced in dreams, all of which is taxable. In addition, advertisers can now "get to you" in your dreams, and commercials are woven into the fabric of the unconscious and subconscious worlds. It would be like getting all the Super Bowl commercials downloaded directly into your subconscious without your consent (kind of like that time in 2014 when Apple decided every iTunes subscriber wanted the new U2 album, whether they purchased it or not).

Although James Preble is a professional dream auditor, he is unaware of this more sinister aspect of his job. The film opens in the middle of his own recurring dream: he sits in a pink room—pink walls, appliances, table—and is presented with a bucket of Cap'n Kelly chicken and a bottle of Red Rocket soda by a jolly "buddy" (Linas Phillips), whose only job is to deliver food (the same food, the same brands) and keep Preble from veering off the expected path. Preble is so used to this state of affairs he doesn't even realize he's being targeted as a consumer in his most private space.

Preble is sent to audit the dreams of Arabella Isadora (Penny Fuller), an eccentric elderly woman who lives in a pink house in the middle of a field. Arabella (or, "Bella") has years of un-logged dreams, and Preble must catalog it all. Since Bella did not make the mandatory upgrade to the airstick, and recorded all of her dreams on VHS tapes, Preble, the humorless civil servant, has an enormous job ahead of him. He straps a big papier-mache contraption to his head, in order to "view" her dreams, and attempts to resist her charming attempts to relate with him personally, to stop and smell the roses, to share his thoughts and feelings. Immediately upon meeting her, Preble's dreams start to change. There's a knock on the door of the pink room, and a woman's voice is heard asking for him. The "buddy" panics. Preble's dreams are now off-road.

Turns out, the young woman is young Bella (Grace Glowicki), ethereal and adorable, smiling at the confused Preble as though she has known him all her life. Their dream adventures are many, but there is always the threat of interruption, of being "found" by Buddy, who keeps showing up, wielding buckets of fried chicken, shouting advertisement slogans, all designed to put Preble back into the passive state of consumer.

Audley and Birney have created an open space where associations float, or zig-zag, or intersect, where fascinating strange things happen—and maybe they're connected, but maybe they're not—since that's how dreams are. Preble moves through Bella's dreams, getting to know her through her associations and symbols. There are blob-like creatures who show up repeatedly—sometimes they are made of mud, sometimes of grass, sometimes they appear to be made up entirely of video tape. There are talking human-sized mice in sailor suits, manning a "Master and Commander"-type ship, as Captain Preble sets out onto the high seas searching for young Bella. Caterpillars take on enormous meaning, as do beets. The dreamworld bleeds into the real and vice versa, leading Preble to make his observation that he thinks he is losing his mind.

This is a film about making associations, about opening yourself up to the powerful emotions held in those associations. Penny Fuller is such a comforting and lively presence, glimmering a smile at Preble, waiting for him to get it. Audley, a wonderful actor, moves as though in a daze: Preble doesn't know how to make those associations, he only sees dreams as assets to be monetized. There are so many fun connections here: shades of Philip K. Dick's Do Androids Dream of Electric Sheep?, "Eternal Sunshine of the Spotless Mind," "Stranger Than Fiction," "Joe vs. the Volcano," "The Congress," and even "Idiocracy." Emir Kusturica's haunting "Arizona Dream," where the four insomniac protagonists wander in and out of each others' often-incompatible dream worlds, is also a reference point. The influences are present, but they're free-associative rather than literal. "Strawberry Mansion" is an eccentric hybrid, like a handmade Valentine.

Becca Morrin's production design is a huge contribution, as is Lydia Milano's art direction. Bella's pink house is a beautiful space, filled with deep colors—greens and purples and pinks—and strange knick-knacks, little cubby-holes of creativity and self-expression, yet all part of a harmonious whole. Penny Fuller exudes the energy of the house: she is warm, inviting, calming, imaginative. Preble finds her irresistible. She is irresistible.

This is no self-serious morality tale, although "Strawberry Mansion" makes its points about freedom, identity, and the importance of human connection. What's miraculous about it is how much space the filmmakers have given themselves to play around, to experiment, goof off, and in this "playing around" all is possible. "Strawberry Mansion" sacrifices nothing. It's whimsical but it's poignant, it's light-hearted and it's deep. There are no contradictions, and no awkward tonal shifts. Like Bella's house, every detail is part of the whole. A "plot" emerges in the second half, when Bella's son—the manipulative Peter (Reed Birney)—tries to stop Preble from doing his audit, and it's not as interesting as Preble's relationship with Bella, old and young, but this plot doesn't dominate in the way it would in a more conventional film. Peter the son is yet another obstacle to Preble leading an authentic life. Bella, both old and young, has the secret, and the secret is simple, as most secrets are.

Audley and Birney are such interesting filmmakers. (Seek out "Sylvio." You won't be sorry.) There is obvious care put into every frame of "Strawberry Mansion," but underneath, they are interested in the right things, the things that matter to everybody. How can I be connected to the world in a more personal way? What am I missing? Is the truth right in front of me? If I slow down enough, if I work to quiet my inner storms, what else might be possible?

Now playing in select theaters and available on VOD on February 25th. 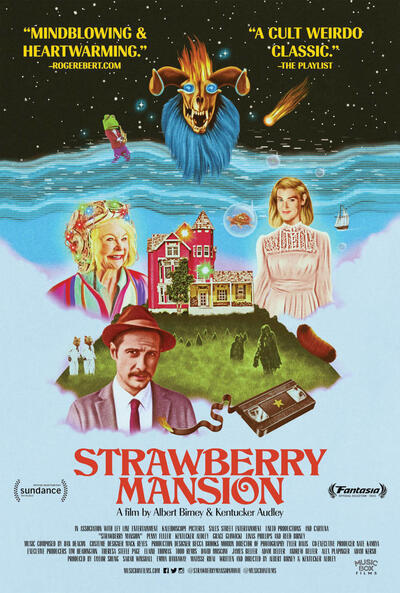