Zippy and zany, cute and cuddly, “Storks” manages to balance wild humor with winning heart—for the most part.

The animated comedy may go back to some of its running gags a few times too many, but its willingness to throw everything at the wall to see what sticks definitely keeps you on your toes and even results in some truly inspired, bizarre bits. Speaking of throwing things, you probably should chuck all sense of logic out before entering the theater. Otherwise, you’ll be distracted by legitimate questions and won’t be able to concentrate on the rapid-fire laughs. But then, improbably, “Storks” ends on a note of genuine emotion and organic inclusiveness that will catch you off guard.

(This is probably yet another example of parenthood turning me soft, as I’d always feared it would. I’m not sure I would have connected with the material as much if I didn’t have a nearly-seven-year-old son—who, by the way, is now whining about wanting a little brother of his own after accompanying me to a screening. So thanks for that, “Storks.”)

The movie does make infancy impossibly adorable, though—even though, as we learn early on, storks don’t deliver babies anymore. They used to, of course—and the baby-making machinery ran like clockwork. But then, one over-zealous stork (voiced by Danny Trejo) became too attached to his newborn charge and accidentally broke the device containing the address of her family.

18 years later, the factory is now an Amazon-like behemoth above the clouds called Cornerstore.com, and the storks use their innate abilities to deliver a wide variety of items to customers all over the world. An up-and-comer named Junior (Andy Samberg) is about to take over the company from his blowhard of a boss (Kelsey Grammer). And the baby who was left behind is now an eager yet clumsy young woman named Tulip (comedian Katie Crown) who’s relegated to doing odd jobs around the office to keep her from wreaking too much havoc.

All Junior has to do is fire Tulip and the job is his. Trouble is, Tulip accidentally starts up the baby-making part of the factory when a letter comes in from a lonely only child named Nate (Anton Starkman), who longs for a little brother because his parents (Ty Burrell and Jennifer Aniston) are too busy with their real-estate business to play with him.

And so the majority of the story from writer and co-director Nicholas Stoller is a mismatched-buddy road trip movie as Junior and Tulip try to deliver the pink-haired, blue-eyed baby girl before the big boss finds out she exists. (Doug Sweetland, supervising animator on “Cars,” shares directing duties). Stoller, making his first foray into animation following such R-rated comedies as “Forgetting Sarah Marshall” and the “Neighbors” movies, understandably dials down the raunch factor that’s a hallmark of his work but manages to maintain a healthy mix of silly and sentimental moments. The shiny, candy-colored palette of “Storks” provides an amusing contrast with the surreal undercurrent of humor that gives the film its offbeat tone. Absurd asides and deadpan one-liners abound.

As always in these kinds of movies, the journey is the destination. Along the way, Junior and Tulip share several high-energy adventures—including a run-in with a pack of wolves, with Keegan Michael Key and Jordan Peele providing the voices of competing alpha and beta wolves, which leads to one of the movie’s most clever, giggle-inducing visual gags.

“Storks” also benefits from the fact that Stoller amassed his actors together as often as possible and let them improvise in person—a rarity in animation filmmaking. Totally unsurprisingly, longtime collaborators Key and Peele share a great chemistry with each other. But Samberg and Crown also enjoy some lively, snappy banter—he’s goofy and overconfident, she’s perky and neurotic—as do Burrell and Aniston in just a few scenes.

But the MVP award goes to stand-up comic Stephen Kramer Glickman as Pigeon Toady, the diminutive dude-bro bird who sucks up to the boss but also desperately seeks his co-workers’ acceptance. With his delusional fantasy life and his Valley drawl, Toady says and does whatever he must to ingratiate himself with his peers. It may not work at Cornerstore.com, but it’d make a great spin-off movie. 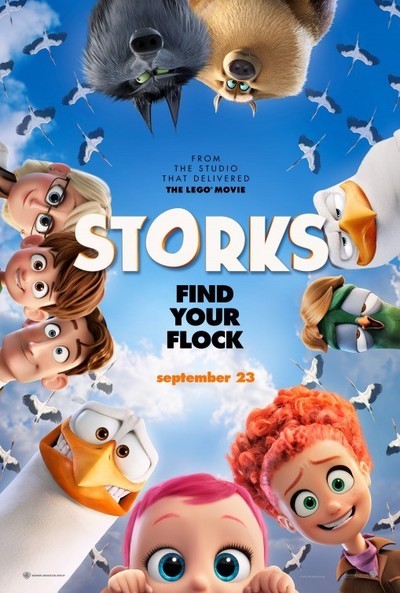 Rated PG for mild action and some thematic elements.