Standing Up, Falling Down

“Standing Up, Falling Down” is a movie that uses such a quaint title as honest advertising—there will be jokes, but it’ll be a little cheesy too. The two qualities come to life when it’s the people who embody that process, and in this case it’s the inspired pairing of Ben Schwartz and Billy Crystal as two new friends who support each other. Yes, you’ve seen this type of story before, but “Standing Up, Falling Down” shows that there can still be a little magic—and charisma—when the material is genuinely funny.

Schwartz stars in this indie comedy as Scott, a stand-up comedian who moves back to his parents’ home on Long Island after years of failure in Hollywood. His life story isn’t that interesting—and he seems to be aware of that by initially telling impersonal jokes on stage—but he has regrets from his past life that he needs to sort out, like the relationship with a woman named Becky (Eloise Mumford), which he ran away from even though she could have been The One. In the movie’s first 15 minutes or so, Scott's journey is not very original (or narratively promising) even though he shares a few good jokes with his ball-busting, scene-stealing sister Megan (Grace Gummer).

It turns out that what Scott needs in his life is a bonafide bon vivant like Marty (Billy Crystal). Crystal enters the movie in a way that’s forced (as some of the script’s comic and dramatic hands can be) by crashing into a urinating Scott in a bathroom, and deciding himself to pee in the sink. That’s just the beginning of Marty’s world of irreverent humor, which Scott gets sucked into and then becomes a central part of. Whether the role was written with him in mind or not, Marty is very much a character you want from a Billy Crystal performance—very clever, a little sly in its self-amusement, always sweet. It goes from strange to charming that Marty keeps popping up in Scott’s life, first as a guy at the bar, then a fellow crasher at the wake at one of Scott's friends, and then as Marty’s dermatologist. It’s a small town, but it’s the confident mechanics of director Matt Ratner that keep putting Marty and Scott together, and eventually you support their friendship.

Marty has problems in his life that he needs to address too—underneath all of his scarves, fedoras, and his Twitter-verified account dedicated to dermatology jokes is a melancholy made up of two deceased wives, children that won’t speak to him, and a former lifestyle he calls “The Beast.” Marty is in bold spirits when hanging out with his new comedian friend, but there’s always a little distance. And when Marty is not with Scott, he’s often alone in his gray home, surrounded by numerous blank surfaces. A character like Marty, who has clearly lived a lot of life, could be too whimsical in certain hands—but the movie's best moments frame him as a surprisingly grounded guy, who likes to do things big because he knows how quiet and lonely everything else can be.

“Standing Up, Falling Down” asks out loud whether a person can, in the script’s laidback way of speaking, “unf**k” something. It’s a good question, of which this movie has a funny, at times aggressively poignant way of answering it. The script by Peter Hoare gets to these problems through conversations between Scott and Marty that are spiked with enough humor and sadness to keep everything moving, while being bolstered by the always-welcome screen presence of Crystal. It’s when the movie tries to squeeze some big emotions out of Crystal later on that the story can be a little flat, sending the script amiss when it starts to aim right for the heart. The movie’s sentimentality comes out better in its inspired moments of bonding, like when Scott’s family affectionately pounds back Irish car bombs at the dinner table.

Schwartz could recently be heard as the voice of Sonic in “Sonic the Hedgehog,” but he does strong dramatic work here in the flesh as Scott. It’s a spirited performance that feels like it comes from the specific rhythms he can offer the world of dramatic acting, even if his character construction is one of many script elements that likely appeared synonymous on paper. And when Schwartz does get behind a microphone stand in the movie’s few stand-up scenes, he’s not just funny but at ease, giving the film a necessary air of playful introspection. To his credit, Schwartz can even sell a truly shameless sentimental speech in the third act.

With a movie like this, chemistry is key, and “Standing Up, Falling Down” has got it. The scenes where Schwartz and Crystal crack each other up while talking about their problems always have an off-the-cuff liveliness, regardless of how much their bonding has been scripted. As the story moves through its unoriginal premise, it at least does so with two naturally funny people, playing two slap-happy guys riffing their way through the next crisis. 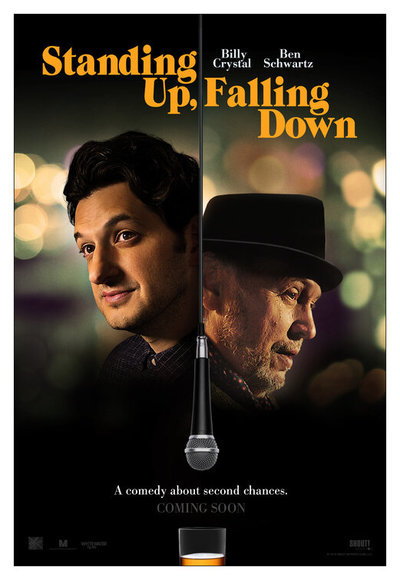