“Sonic the Hedgehog” is the worst kind of bad movie: it's too inoffensive to be hated and too wretched to be enjoyable. You might think that this movie’s sad limbo state has something to do with the extensive and well-publicized last-minute animation redesign that made titular woodland creature Sonic (voiced by Ben Schwartz) look more like Sega’s famous video game character. You’d be wrong: “Sonic the Hedgehog” is rotten because it, like too many other modern blockbusters, was seemingly made by an imaginatively bankrupt creative committee with more ideas for jokes than actual jokes to tell, and more cookie-cutter, place-holder dialogue about the power of friendship than something (anything) to say about that boilerplate quality.

“Sonic the Hedgehog” is a bad action-adventure, video game adaptation, and buddy comedy. It feels almost completely impersonal, save for whenever James Marsden, playing Sonic’s human companion, tries to rescue the movie by being confident and graceful in the face of an otherwise dire send-the-magical-critter-back-home kiddy fantasy. I hope that everybody involved in the making of this movie got paid well and on time. Nobody else has an excuse to see “Sonic the Hedgehog,” especially now that easily defeated parents can park their kids in front of a computer or TV and let them watch some “Sonic the Hedgehog 2” gameplay videos on YouTube. Trust me: your kids’ happiness does not depend on them seeing this movie.

Still, if you must take your kids to see “Sonic the Hedgehog,” there are a few things you might want to know. For starters, this is a painfully bland “E.T.: The Extra-Terrestrial” clone. Sonic, a magical critter who can run fast, teams up with nice guy/small-town cop Tom Wachowski (James Marsden) to regain the whatsit—in this case, a pouch of gold rings that open portals to any destination Sonic can think of—that will help him to escape goony mad scientist Dr. Robotnik (Jim Carrey), who wants to dissect Sonic. So Tom and Sonic go on a cross-country road trip from fictional Green Hills to San Francisco, because that happens to be the city on Tom’s shirt when he, in a panic, shoots Sonic with a bear tranquilizer, and then Sonic, now stunned on powerful wildlife drugs, accidentally throw his rings onto a Golden City rooftop. San Francisco also happens to be the city where Tom wants to move to, given his completely original dream of finding recognition and excitement beyond his quaint hometown.

But really, the set-up for “Sonic the Hedgehog” hinges on a bear tranq and some bad timing. The rest of the movie’s non-existent sense of urgency is provided by Dr. Robotnik, a hammy antagonist who likes to yell about how much smarter and more powerful he is compared to everyone else. Dr. Robotnik controls expensive-looking robot drones and has a flimsy waxed mustache that looks like one of those party favors you see every third wedding guest wearing in your Facebook friends’ wedding reception photos. Dr. Robotnik is not very interesting, but he’s in the “Sonic” video games, so he’s in this movie, too.

Also, there are some dull stranger-in-a-strange-land shenanigans involving Sonic’s bucket list, whose bullet points include “tame a wild animal,” “start a bar fight,” and “make a best friend.” Your kid could probably write a better scenario, given a little focus and the right motivation, two qualities that the makers of “Sonic the Hedgehog” seem to lack.

I don’t mean to be unnecessarily harsh, but based on the movie I saw, “Sonic the Hedgehog” doesn’t need to exist. Marsden does a lot of heavy lifting just by reacting to a computer-generated character whose only distinguishing feature is his resemblance to a beloved video game character that was never really interesting unto himself. But Marsden can’t save this movie from a deluge of uninspired chase scenes, dumb plot twists, and disposable pop culture references (wow, he’s doing the floss dance again, terrific). “Sonic the Hedgehog” is only as successful as the amount of time you want to spend watching its animated protagonist go on instantly forgettable adventures, and boy, is that unfortunate.

If you really want to know why you should skip “Sonic the Hedgehog,” try to watch the movie’s trailer, and see how much of Jim Carrey’s aggressively joyless performance you can take. Like Marsden, Carrey does a lot of acting, but unlike his co-star, Carrey is never as entertaining as he is energetic. Watching Carrey in “Sonic the Hedgehog” is like watching a drunk try to jumpstart a party that was well and truly dead upon his arrival. Unfortunately, Carrey’s laborious efforts only make things worse. I don’t know that “Sonic the Hedgehog” was ever salvageable, because ultimately, everything in it, including the good stuff, is depressing. 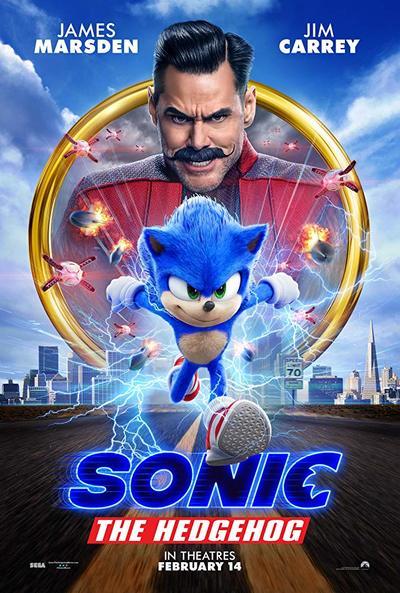