There are some entertainment-based duos for whom the mention of one name automatically conjures up the other: Brackett and Wilder, Ashford and Simpson, Ossie Davis and Ruby Dee, Abbott and Costello, and of course, Laurel and Hardy. The title of Jon S. Baird’s funny, entertaining biopic “Stan & Ollie” refers to that last duo by their first names as a gesture of intimacy and familiarity;  it also denotes that this is a personal story rather than a career-based one. Films in this genre often succumb to the pitfalls that John C. Reilly so mercilessly mocked in his still-underrated parody “Walk Hard: The Dewey Cox Story.”  While “Stan and Ollie” doesn’t always skirt those traps, it compensates for them by infusing the proceedings with a genuine and profound sense of melancholy. Baird and writer Jeff Pope ask us to ponder how we’d feel if we were no longer able to do something we loved so deeply.

Reilly is an odd choice to play Oliver Hardy, though his natural comic abilities and musical talent make him inspired casting. Once he’s under makeup that took four hours to apply, Reilly performance becomes a heartfelt tribute. It’s more than just the physical mimicry found in the recreations of scenes from films like “Way Out West,” it’s also a portrait of a man whose body is finally taking its revenge for his youthful, hard-living excesses. The passage of time manifests itself in Reilly’s carriage; the man we see in 1953 when this film is set has far less vitality than when we see him briefly in 1937. Except, of course, when he’s performing.

Matching Reilly beat for beat is Steve Coogan, whose resemblance to Stan Laurel is also rather uncanny. The two actors have exceptional chemistry—we can easily believe they’d worked together for decades because they are so in sync. Laurel, the writing half of the pair, is constantly bouncing ideas for verbal and visual gags off Hardy, and their push and pull feels lived in and genuine. An early scene, which occurs at the height of their fame, finds Laurel recruiting his partner to demand more money in a contract negotiation with their boss Hal Roach (Danny Huston in a grouchy cameo). Since Hardy has bigger debts to settle thanks to his affinity for playing the ponies, he’s a lot quicker to fold against Roach than Laurel expects.

Fast-forward to 1953, where the duo embarks on a British nostalgia-based tour in order to prove to a Hollywood mogul at Columbia that they’re bankable enough for a Robin Hood-based feature. The two men are older, and haven’t seen each other in a few years, but they quickly fall back into their routines and their friendship roles. They’re saddled with a smarmy Brit promoter named Delfont (Rufus Jones) whose love of his clients’ talent is outweighed by his inability to get them anything but the smallest, most rundown venues. It’s no matter, because the audiences who show up initially don’t even fill all the seats.

Still, the people who do show up express their love for Laurel and Hardy, and more amusingly, describe how much their parents and grandparents loved them as well. To draw more attention to their shows, Delfont sends his stars on publicity tours where they improvise for TV, print outlets and whomever shows up to see them. The audiences get larger, but the publicity stunts take their toll, especially on Hardy, who’s physically larger than he was in his heyday and has a bum ticker that can potentially derail their return to the silver screen.

Despite having only two names in the title, “Stan & Ollie” is actually a four-hander. Laurel and Hardy are joined by their wives Lucille Hardy (Shirley Henderson) and Ida Kitaeva Laurel (Nina Arianda). Mrs. Laurel is a former dancer who once auditioned for films. Like her husband, she’s very driven and has a tough side that clashes with Mrs. Hardy’s more easy-going (but no less tough) attitude. The women reflect their husbands’ personality dynamic, but while the men are in a physical gag comedy, the women are playing in a parallel, very verbal screwball comedy. Henderson and Arianda are so great together, alternating between sisterly bonds and mutual aggravation, that they could easily host their own spinoff feature.

The third act conflict that threatens to tear apart the partnership arrives as expected, but it comes with some very strong emotions that transcend the cliché. Laurel and Hardy’s livelihood is challenged not just by hurt feelings that have festered for decades but by the ravages of time, both physically and career-wise. Laurel has ideas to spare—not a scene goes by when he isn’t spinning some gag—but does anyone want to see them on screen anymore? And if so, can Hardy’s heart allow him to continue executing their routines? It’s clear that both men live to perform, and without that, there’s nothing to distract them from the ticking time clocks of their impending demises. The four leads acknowledge and reflect the underlying sadness of this situation in scenes that are very moving.

“Stan & Ollie” is full of tender moments between the men and their wives, but it saves its loveliest moment for the men. Watch how Laurel decides to comfort a bedridden Hardy late in the film. Coogan’s act of kindness toward Reilly feels perfect—the visual is comic but the sentiment is genuine and almost heartbreaking. This film succeeds because it knows how to strike the right balance between laugh-out-loud comedy and quiet, effective drama. The clichés are there, but its heart beats loud enough for us to embrace and forgive them. 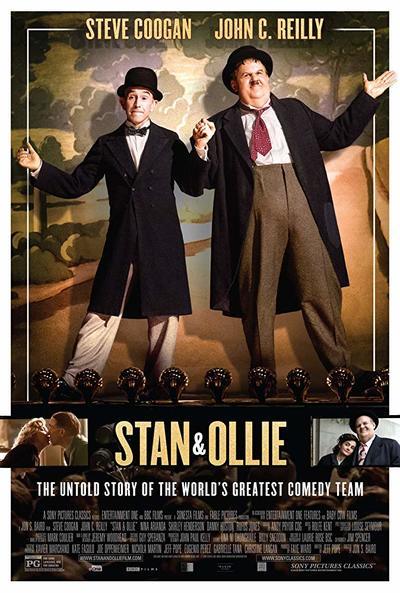 Rated PG for some language, and for smoking.