Stairway To Heaven (A Matter Of Life And Death)

“Stairway to Heaven" (1946) is one of the most audacious films ever made - in its grandiose vision, and in the cozy English way it's expressed. The movie, which is being revived at the Music Box in a restored Technicolor print of dazzling beauty, joins the continuing retrospective at the Film Center of 15 other films by Michael Powell and Emeric Pressburger, the most talented British filmmakers of the 1940s and 1950s.

"This is the universe," a voice says at the beginning of "Stairway to Heaven." "Big, isn't it?" The camera pans across the skies - but the story, as it develops, is both awesome and intimate, suggesting that a single tear shed for love might stop heaven in its tracks.

The story opens inside the cockpit of a British bomber going down in flames over England in the last days of World War II. The pilot, Peter (David Niven), establishes radio contact with a ground controller, an American named June (Kim Hunter). Peter is unflappable in the face of death, and an instant rapport springs up between the two disembodied voices ("I love you, June. You're life, and I'm leaving it"). Then Peter jumps out of the plane before it crashes.

What follows is a breathtaking pastoral moment, as the pilot, somehow alive, washes ashore and sees a young woman, far away, riding her bicycle home. It is, of course, June, and soon they are deeply in love. But there is a problem. Peter was not intended to live. Heaven has made an error, and an emissary, Heavenly Conductor 71 (Maurice Goring) is sent to fetch him back. Peter refuses to go, and a heavenly tribunal is convened to settle the case. This fantasy is grounded in reality by a brain operation the pilot must undergo; perhaps his heavenly trial is only a by-product of the anesthetic.

The British title of this film was "A Matter of Life and Death," and when the Americans retitled it "Stairway to Heaven," Powell wrote in his autobiography, he felt they had missed the point. But "Stairway to Heaven" may be a more expressive title, and certainly there is a stairway in the film, part of the incredible contribution of production designer Alfred Junge, who also provides one of the most spectacular shots in movie history, a view of heaven's underside: Vast holes in the sky with tiny people peering down over the edges. The heavenly scenes are shot in black and white, and the movie is filled with technical tricks, as when "real life" freezes while spirits leave their bodies.

The film's most audacious leap is to the trial in heaven to decide whether Peter will be allowed to stay on earth. Junge creates a heavenly amphitheater that fills the sky, and fills it with infinite ranks of heaven's population. Standing on one precipice, the prosecutor, an American played by Raymond Massey, argues against the British pilot. In one of the comic touches that deflates any excess profundity, he argues that Peter and June could never be happy together because they come from different cultures. First, we hear a radio broadcast of a cricket match; then an American big band broadcast. He asks the jury: "Should the swift current of her life be slowed to the crawl of a match of cricket?" But of course the question is not whether Peter and June will be happily married, but whether they will be married at all, and here the tear of love, captured on a rose petal by the Heavenly Conductor, becomes crucial evidence.

"Stairway to Heaven" has as its subtext the jockeying for power between Britain and America that took place after World War II.

British critics, at the time, sniffed that the film was too pro-American. What today's audiences will find amazing is the sheer energy of its invention. Powell and Pressburger (who always shared the writing, directing and producing credits, and whose production company was known as the "Archers") were not timid in reaching for new visual effects, and among the many startling sights in "Stairway to Heaven" is an eyeball's point-of-view of its eyelid closing,before the brain operation.

There's also sly humor. Heaven has a Coke machine for the arriving Yanks; newly appointed angels are seen carrying their wings under their arms in plastic dry-cleaner bags; the dialogue at the trial includes complaints like, "Would you repeat the question? It has `enamored' in it." Today's movies are infatuated with special effects, but often they're used to create the sight of things we can easily imagine: crashes, explosions, battles in space. The special effects in "Stairway to Heaven" show a universe that never existed until this movie was made, and the vision is breathtaking in its originality.

As a kid, Martin Scorsese discovered the Archers on TV, watching Million Dollar Movie on a New York station that would show the same film seven days in a row. He says that's how he did his homework.

It's appropriate that the restoration of "Stairway to Heaven" and the revival of the other 15 Archers films (running at the Film Center through May) are "presented by Martin Scorsese." 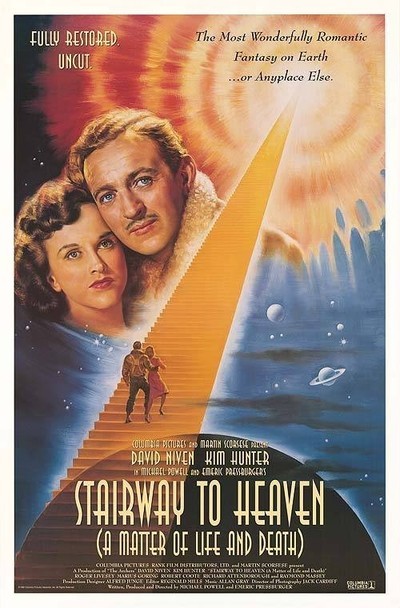 Directed, Produced and Written by