Set amid the familiar, gritty grounds of a backwoods thriller, “Spell” attempts to summon the terrors of “The Hills Have Eyes” in a “Misery” package, with little jolt and even less cinematic elegance to go around.

On paper, there is some appeal to the film’s shtick—a predominantly black cast telling the story of a captive man stranded in the Appalachian Kentucky suggests something fresh could come out of this well-worn formula of grimy witchcraft horror. But director Mark Tonderai (“House at the End of the Street”) and writer Kurt Wimmer (“Salt”) don’t show any interest in deconstructing a tried-and-true recipe. Instead, the duo indulges in various box-ticking elements that are at best serviceable: squeaky floorboards, rusty door hinges, sweat-soaked exertions towards an escape route and even a pair of truly grotesque scenes involving injured feet (just to earnestly make good with that “Misery” reference) are among the frequent offerings of “Spell.”

If that’s enough to pique your interest in a hoodoo horror aptly releasing the day before Halloween, cozy up under a blanket and lean in to follow the story of Marquis T. Woods, a thriving businessmen leading a happy family life in his luxury home, equipped with all the cutting-edge trimmings of an upper-class existence. “Spell” is quick to disclose to the audience that life wasn’t always peaches-and-cream for Marquis, however. Through overdone flashbacks, we learn that the self-made young man succeeded after leaving behind a troubled past and an abusive father somewhere in Appalachia. But that past finds him against the odds, leaving Marquis with little choice but to face it head on. Learning that his cruel father has passed away, he decides to take his family—his supportive wife Veora (Lorraine Burroughs) and two teenaged kids—on a trip to attend his dad’s funeral.

Conveniently enough, aviation happens to be among Marquis’ many sophisticated interests. Except this time, the private plane that he pilots crashes, leaving Marquis at the mercy of the kind and curiously friendly Eloise (Loretta Devine, delivering a freakishly polished performance in spite of her under-written character), who volunteers to nurse the survivor back on his feet. Though the shell-shocked, badly injured Marquis is quick to suspect something’s off when he wakes up in the old woman’s secluded attic tucked away deep in the woods. With his family gone missing without a trace and being offered a series of vague excuses for his off-the-grid situation—such as the remoteness of even the nearest hospital and lack of any modern devices like a phone— Marquis swiftly discovers he can only rely on his own instincts and survival skills to flee Eloise’s sinister plan while pretending to comply with her routine in the interim.

If only the script could have paced its revelation of Eloise’s menacing intentions better. But Wimmer spends far too long dwelling on stock anxieties that don’t add up to much, disclosing the characters’ secrets a little too late. Eloise seems to be a part of an occult, has a voodoo poppet with the power of causing real harm, and keeps feeding Marquis plates of suspicious food, but who knows (or cares) where any of this is going when the filmmakers prove more interested in a paint-by-numbers yarn than the lean and mean tale “Spell” could have told? In that regard, the film hazily hints at some social commentary around class and race, only to abandon its Jordan Peele-esque inspirations prematurely. The yellow-and-orange tinted grit of the film’s dark photography, filmed by an often frantic lens and clumsy framing, feels similarly second-hand and under-realized. (One pointless slow-motion moment towards the film’s cathartic finale seems especially out of place.) Underneath all that, “Spell” effectively conjures up a pair of gross-out moments and consequent screams, but the angst it spreads throughout feels all too mild and forgettable to cast an unnerving curse. You know, the kind you’d crave from a horror film with lasting scares. 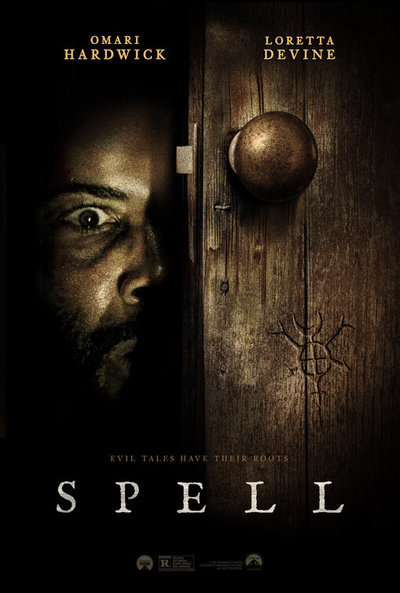