A simple approach to art can be a virtue when chaos reigns in the world. Just like the neo-folk music that serves as its soundtrack while providing an emotional salve for its characters, “Song One” initially serves as a lilting if sometimes downbeat respite from the cacophony that often passes as cinema today.

But even a stripped-down emo-ode to the healing power of music needs to build up to a satisfying crescendo. In her feature debut, writer/director Kate Barker-Froyland tends to tiptoe away from the dramatic high notes that audiences often crave and comes up a stanza or two short from a fulfilling resolution.

Often, “Song One” feels like the timid B-side of last summer’s more satisfying music-biz saga, the much less woe-is-me and a lot more let’s-have-some-fun “Begin Again.”

Unlike many low-budget indie titles, however, the novice filmmaker does have the benefit of a couple of actual stars in her cast. They go far to help carry this story about how a young woman reconnects with her family in New York after a car accident leaves her estranged brother (“Boardwalk Empire’s” Ben Rosenfield), a Brooklyn-based busker, in a coma.

As Franny, a rather sullen globe-trotting anthropologist working on her doctorate, Anne Hathaway—looking like the early Liza Minnelli with her gamine hairdo—isn’t quite as distraught as she was while winning her 2012 supporting Oscar as miserable prostitute Fantine in “Les Miserables” or as a weepy astronaut in last year’s “Interstellar.”

Still, her big-screen crying jag continues apace as she and her mother (Mary Steenburgen, who does what she can as a self-absorbed intellectual whose props include American Spirit cigarettes and a twee accordion) take turns sitting vigil in the hospital while hoping for a miracle. Remember when Hathaway charmed us as a quick-witted gangly Everygirl in “The Princess Diaries” and “The Devil Wears Prada” that could make us laugh? Where has she gone?

Back to the plot. Lacking a sanctuary while back home—her mother has symbolically given her bed away to her mail person—Franny stays in Henry’s room and, like the anthropologist she is, steeps herself in what he has been up to while pursuing his music dreams. Besides recordings, there is a journal stuffed with scribblings: lyrics, deep thoughts, photos—and, lo and behold, a ticket to an upcoming concert by his favorite balladeer, James Forester.

If you get an inkling that Franny and hipster-poet James will get involved romantically after she tells him about Henry’s situation and his admiration for him, that would be a bingo. Johnny Flynn, the English actor-musician who plays James, duly possesses the soulful eyes and shy presence of a folk artist. And he certainly sings and performs well enough, both on guitar and violin. It is not hard to believe that countless giggly girls in their summer frocks would line up after the show to see him.

He is also kind enough to stop by to see Henry the next day. Alas, his character is soon revealed to have all the personality of a very sincere though slightly damp sponge. It also is a little too convenient that he has been dumped by his girlfriend, which has blocked his talent for composing new material. Guess who will be his next muse? Bingo again.

What time Franny doesn’t spend with James in clubs is devoted to appealing to Henry’s senses with familiar sounds and smells in the hopes it will stir him. She records street noises for him to hear. She buys takeout pancakes from his favorite all-night diner and pours syrup on them in front of his nose. Franny even shells out money for an antique gramophone to replace one that Henry broke and spins some scratchy records on it in his hospital room. Will her efforts pay off? Will we be able to tolerate her and James’ somewhat ill-advised relationship long enough to find out?

One wonders what Hathaway saw in this only partially-baked story. It turns out Barker-Froyland was an assistant to “Prada” director David Frankel, and it is nice to know that the actress is supporting her climb up the Hollywood ladder.

But for those hoping that Ms. “Les Miz” will sing again for her supper, given the subject matter of “Song One,” you will have to settle for Hathaway’s intentionally amateurish crooning of America’s soporific ‘70s chestnut “I Need You.” At least she knew better than to revive “A Horse With No Name.” 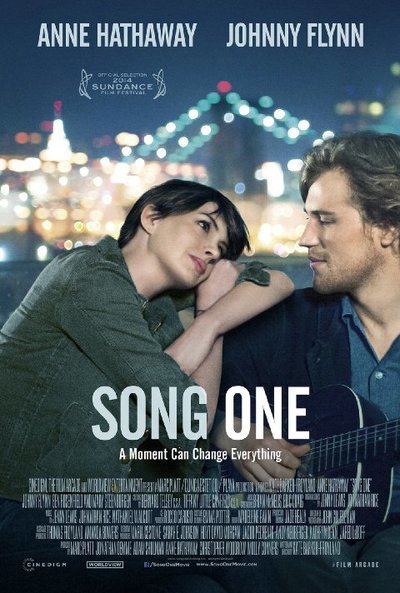 Rated PG-13 a scene of sexuality, and brief language