For John Carney, "Once" apparently is not enough. The Irish writer/director who serenaded the world with that wee Dublin fairy-tale sensation from 2006 is back again to tease audiences with another song-filled variation on his signature brand of platonic lust in "Begin Again."

With its cast of extremely likable performers, the perfect summer-in-the-city backdrop—in this case, New York—and a soundtrack stuffed with catchy, well-produced hits, "Begin Again" makes for easy-breezy entertainment. And it provides the perfect alternative to certain obnoxious boy toys that will be mangling the box office into their own private playpen this weekend.

The one fly in this perfectly fine ointment: Carney’s idea of romance leaves me frustrated. Not that the guy isn’t fully capable of being a matchmaker. The stars of "Once," Glen Hansard and Marketa Irglova, turned into a real-life couple for a while after working together. But onscreen, the filmmaker likes to keep sexual combustibility on a simmer while never fully turning up the heat—as if even a mere kiss would scorch the sacred essence shared by spiritual soul mates.

Some might prefer that approach as opposed to more clichéd male-female entanglements. But think what would have happened if Carney had made "When Harry Met Sally…". That classic funny valentine would probably end with the two leads exchanging a handshake, a knowing look or even just a heartfelt thank-you while agreeing that, yes, they should just be friends.

Don’t you just want to sigh after reading that?

Probably the only time I sighed during "Begin Again," which used to carry the more provocative title "Can a Song Save Your Life?" when it premiered at the Toronto International Film Festival last fall, was the sight of Mark Ruffalo’s scruffy record-label exec, Dan, as he doffs his undies before jumping into the shower. No one can blame Catherine Keener, in yet another of her string of estranged bitter wife roles (OK, she is good at them), for sneaking a sly peek after turning down his offer to join him in his sudsing.

Basically, a movie can’t help but be bettered by the presence of this gloriously hirsute actor with the killer smile, unruly curls and bedroom eyes. That’s true even if Ruffalo is a cash-strapped boozehound of a loser who is desperate to find a musical discovery that will restore his status in the industry, give him a reason to pull his life back together and allow him to pick up a bar tab once in a while. But as he proved early in his career as the feckless brother in "You Can Count on Me," Ruffalo is nothing if not eminently redeemable.

His savior ends up being Keira Knightley as Gretta, a British singer-songwriter introduced at an open-mike night at an East Village saloon after her smug, self-involved and pretentious rock star ascendant American boyfriend (Adam Levine of Maroon 5 and TV’s "The Voice," basically playing off his public persona to the hilt) cheats on her while leaving her to fend for herself in the big city. It’s an event that, since she is an intuitive Artiste with a capital A and an “e” at the end, spontaneously inspires the ditty she performs hours later.

"Begin Again" is aptly named since it, indeed, recounts the same day over again in its opening sequences before Gretta and Dan meet after her performance. First, it is told from Dan’s point of view as his haphazard behavior negatively affects all he encounters, especially his neglected teen daughter (Hailee Steinfeld). Then we witness Gretta’s version, as she learns her squeeze for the past five years has cheated on her. How? By listening to the lyrics of his new song. See, she is quite the intuitive Artiste.

From there, a drunken Dan and an intrigued Gretta decide to make a demo album all on their own, along with some seed money courtesy of a rap impresario (a large and in charge Ceelo Green, basically playing off his public persona to the hilt) who owes a debt to Dan for his career. And because they want to keep it real, as Artistes are wont to do, they will be recording everything outdoors—in alleys, on rooftops, in the subway—allowing the city to add its own music. It’s all very green, natural, sincere and reeking of integrity.

Of course, making an audio baby together brings the pair closer (but never THAT close), although they both influence the choices each makes afterwards. What follows isn’t always predictable and that is admirable. However, as good as Knightley is in the role, Gretta continues to be more of an idealized muse and less a fully-rounded person. How darn retro-cute (and somewhat nauseating) is it that she has Frank Sinatra’s "Luck Be a Lady Tonight," Stevie Wonder’s "For Once in My Life" and Dooley Wilson’s "As Time Goes By" on her digital playlist?

A higher budget and actual stars allow Carney to add a not-displeasing gloss to "Begin Again" and he has terrific taste in actors, including James Corden as Gretta’s busking buddy who is about to break out in "One Chance" and "Into the Woods" later this year. And, yes, Knightley can warble well enough in a feathery emo-rock way about assorted heartaches—imagine Alanis Morrisette after downing too many breath mints and a Valium.

Ultimately, any movie that is driven by music should leave you humming as you leave the theater. Whether it’s the tunes or Ruffalo that causes you to feel that way, it is all good enough. 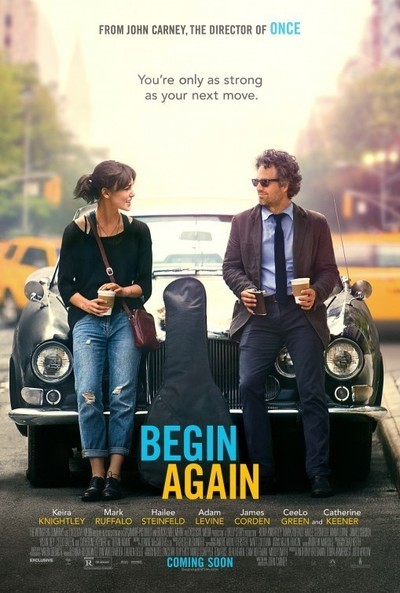