Nothing kills a comedy quicker than a clammy feeling that it’s a little too eager to prove how audaciously smart and subversively hip it is. Consider that “Social Animals” was originally titled “F*cking People.”  Good thing it was replaced since that coy little asterisk is just asking to be slapped. The film  desperately tries to be wild and out of control, but it ends up as more of a slapdash portrait of cartoony desperation than any sort of realistic depiction of millennial angst when it comes to current-day female lifestyle choices. Writer/director Theresa Bennett picks the over-tried but rarely true framework of focusing on three 30-ish women—struggling body-waxing salon proprietress Zoe ("Saturday Night Live" alum Noel Wells), engaged band manager Claire (Carly Chaikin) and neurotic mom of three Jane (Aya Cash)—as they grapple with the concept of what was once known as maturity but now is cutely referred to as “adulting.” In the process, Bennett basically kicks any Bechtel test considerations to the curb by primarily defining these ladies by their sexual proclivities (or lack thereof) with men. While there might be some gold to be mined from a deep dive into relationship choices beyond married with children, this depiction of alternate options barely skims the surface.

Bennett at least takes a stab at post-Trump social commentary with an early montage of outdoor graffiti art that decorates a gentrifying Austin, Texas, neighborhood. Needless to say, the messages lean to the left. Among them, “Make America Hate Again,” “Live a Great Story,” “So Close Yet So Far Out” and “Coming Soon: More Rich People.” Verbally, there is a slight attempt at a Melania joke, too. So far, OK.

Then the plot kicks in. Imagine if “Girls” were a mumblecore production packed with cursing and bad behavior but without any explicit canoodling. Pot-loving, flask-carrying party girl Zoe, who gets the most screen time, is given an excuse for her irresponsible behavior and lack of social skills. Her parents, who she describes as “the Bonnie and Clyde of tax evasion,” are both dead. She lives in a tiny trailer and is about to be evicted by her fed-up landlord—or, rather, lawn-lord—while her follicle removal biz is on the verge of going belly up. But instead of scrambling to get a new source of income, Zoe indulges in a string of one-night stands that she chronicles with Polaroid photos.

As for gainfully employed buddy Claire, her fiancé is such a diehard Republican, he gets turned on by re-watching the 2000 GOP presidential convention and forces her to wear a George W. Bush mask during sex. She goes through the garbage hoping to find signs of cheating just so she can leave him. Then there is Jane, who is overloaded by her truckload of responsibilities—including being the main bread winner as well as the caretaker of two unsmiling twin daughters straight out of “The Shining” and a 5-year-old son who thinks and acts as if he is a dog, to the point that he walks on all fours while on a leash. Meanwhile, husband Paul indulgently runs a cavernous video emporium, which appears to have zero customers—that is, until a curious Zoe stumbles in one day. Given that depressed Jane has lost all of her desire for Paul while encouraging him to have an affair, he and Zoe begin to hang together platonically—a situation that is bound to lead to romance.

The three ladies first intersect when they attend a wedding for bridezilla Lana (Samira Wiley in glow mode, who deserves a break from the travails of “The Handmaid’s Tale”), representing those women who look down upon steadfastly footloose singletons like Zoe. As for stand-up comic Fortune Feimster as sex-shop owner Sarah-Beth, she is tasked with pulling off the film’s detours into slapstick shenanigans, such as allowing Zoe to give her a Brazilian, a scene that doesn’t come close to Steve Carell’s man-scaping torture in “The 40-Year-Old Virgin.” Feimster also delivers an oral sex seminar, in which cucumbers play a big role. But that demo pales next to Phoebe Cates’ school cafeteria carrot tutorial in “Fast Times at Ridgemont High.”

I guess Bennett deserves some credit for focusing on female interactions in her feature directing debut. Yet, the lone character who feels the most real and deserving of sympathy is Paul, who is fleshed out with some semblance of subtlety by Josh Radnor of “How I Met Your Mother.” He is in the impossible position of not knowing how to satisfy a wife whose main complaint, other than the fact he is about to lose his lone source of employment, is that he never straightens the hand towels in the bathroom. Also, Wells ups her acting game whenever she and Radnor shares the same space. But that isn’t enough to make up for the fact that the song over the end credits is called “Shit Makes the Flowers Grow.” 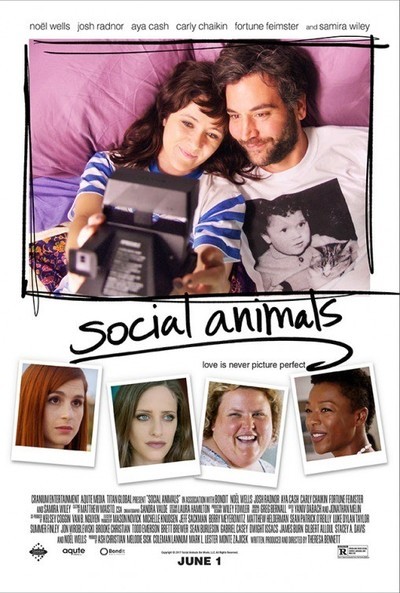 Rated R for strong and crude sexual content, language, and drug use.