As I tried to make clear in my review of “Kurt Cobain: Montage of Heck,” and Roger Ebert stated over and over again, it’s not what a movie is about, it’s how it is about it. That film took a deep, archival approach to Cobain’s life, using home movies as a window into the trajectory of an artist. While one can debate the quality of Nirvana’s music or importance of Cobain’s legacy, that’s not truly relevant to how successful the filmmaking is or not. I bring this up because “Soaked in Bleach,” the second Cobain documentary of the year, albeit with a drastically different focus, conveys a hot-button topic about which people feel very strongly. And yet analysis of Benjamin Statler’s film shouldn’t really hinge on whether or not you believe Courtney Love killed Kurt Cobain. (I do not, for the record). It comes down to filmmaking. And this is a bad film, filled with awkward reenactments, poorly designed graphics, scripted interview segments, ominous music and enough jumping to conclusions that I’m surprised someone didn’t throw out their back.

The thrust of “Soaked in Bleach” is upfront and simple—the Seattle Police Department didn’t investigate the death of Kurt Cobain properly and there was enough suspicious behavior before Cobain’s body was found and enough inconsistencies in the death scene that further investigation is warranted. Most of the film comes from recordings provided by investigator Tom Grant, who serves as the film’s main interview subject as well. Grant was hired in the days before Cobain’s body was found by Courtney Love and he’s notorious for claiming that he was at Cobain’s house the day before his body was found with friend Dylan Carlson, and neither looked in the greenhouse to find the lead singer. Grant definitely has an interesting story to tell, and his audio recordings of conversations with Love reveal odd behavior on her part before her husband’s suicide. However, odd behavior on the part of junkies is not uncommon.

Much of “Soaked in Bleach” consists of reenactments of Statler and Grant’s version of events, often accompanied by audio recordings of the real Love, Grant, etc. Character actor Daniel Roebuck plays Grant to Sarah Scott’s Courtney Love and these scenes play like a bad true crime series on ID Discovery (shows with names like "Deadly Women" or "Unusual Suspects"). Love is always half-naked, doing drugs—the film is a blatant smear campaign from scene one and would have been much stronger without the bad taste that leaves—and every meeting is in a dark, smoky room while she wears a nightie. It’s a filmmaking technique that constantly sabotages any realistic arguments that the film could make by virtue of exaggeration and inconsistency.

About those inconsistencies—like a conspiracy theorist who has had a few too many at a bar, Statler and Grant are constantly leaping over logic to get to their conclusions. They easily dismiss Nirvana’s lyrics as having no bearing at all on the theory that Cobain was depressed but they value the fact that he never mentioned suicide to old hometown friends. They stage a major scene in which Carlson is supposed to talk to Grant but chooses to shoot up with Love first as evidence of a conspiracy between the two instead of just, you know, addiction. And they miss the biggest aspect of the Cobain death—the investigation could have been incompetent AND Kurt Cobain could have killed himself. Both things can be true. But “Soaked in Bleach” takes the approach that the failure of the Seattle PD to process pictures is one of the greatest proofs that Cobain didn’t kill himself.

Again, it’s not about the conclusions of “Soaked in Bleach” but how they’re reached and presented. Statler does his subject and his leading man in Grant a disservice through exaggerated filmmaking—every interview subject is shot in low light on a stormy night, for example. A thorough documentary would present both sides and would do so without such demonizing and cartoonish reenactments of what the filmmaker believes is the truth. By going to such extremes, Statler sabotages his own purpose. He wants to make a film about what really happened, but none of it looks or sounds real. 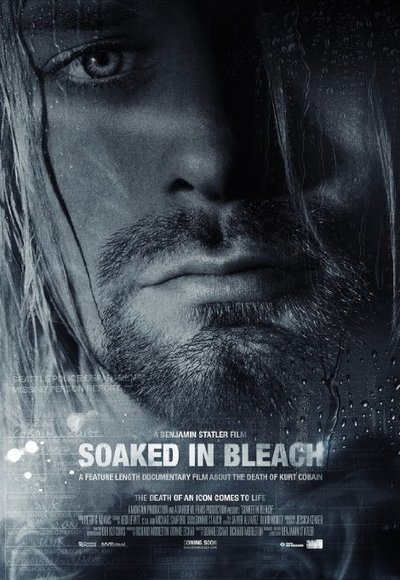 Kurt Cobain as Himself

Kurt Loder as Himself