Blowing his own alpenhorn

Some dramatists are capable of being simultaneously misanthropic and empathetic. At his best, Todd Solondz's disdain for his characters' worst behavior is off-set by his identification with their pathologically insecurities. Solondz is, in that sense, an accomplished caricaturist. Recent films like "Life During Wartime" and "Dark Horse" suggest an intimacy and knowledge of his subjects that extends well beyond simple parody.

When we first meet Franklin, he's fantasizing about an astro-turf-like meadow in Switzerland while playing his alpenhorn. In reality, Franklin's blowing his horn in over-sized tighty whities. Empty bottles of Moxie soda are scattered throughout Franklin's apartment. And just behind a deeply discombobulated Franklin is his landlord's corpse.

Unfortunately, this callous introduction to Franklin is tonally consistent with the rest of "Small Apartments." For a while, Akerlund and Millis relish leading viewers around by the nose, revealing new pieces of equally mean-spirited, and unfunny information about the film's supporting characters. They all have off-putting tics of their own: Burt Walnut (Billy Crystal), the cop investigating Franklin's landlord's (Peter Stormare) death, pretends that his relationship with his missing wife is A-OK while Franklin's brother Bernard (James Marsden) spitefully mails some toe-nail clippings and a rambling cassette tape full of life lessons to Franklin.

The film's goal is ostensibly to prove to its protagonists just how random and strange but utterly human the little foibles and incidents that distinguish our respective dreams and habits really are. But by the time Bernard delivers his last inspirational tape, one that desperately tells Franklin that "happiness is a state of mind," Akerlund and Millis have made it apparent that their interest and affection in their damaged, geek-like protagonists isn't even surface-thin. In spite of its creators' half-assed last minute attempt to prove that they do in fact care, there's no genuine empathy in "Small Apartments," just lots and lots of misanthropy.

Self-help is the predominant theme in "Small Apartments": everyone is, to some extent, trying to figure out how to improve their lives. Franklin's neighbor Tommy Balls (Johnny Knoxville) strives to achieve one life goal per day, even if that goal is to make a gravity bong. Even Bernard was, before committing himself, seeking help from an Oprah-approved self-help guru named Dr. Sage Mennox (Dolph Lundgren). As a sign of how futile Akerlund and Millis's sub-sub-Vonnegut schtick is, Mennox has no answers. Instead, he instructs his followers to exercise their minds as they would a muscle, thus preventing "Brain [attacks]," and allowing them to win in the "Ultimate Olympics of mental self-discovery." Franklin's idea of self-help is considerably more modest: after getting rid of his landlord's body, he dreams of escaping to the land of his Swiss Miss commercials.

Since contempt is self-perpetuating, the film's smug style of comedy predictably makes Franklin, the most innocent character in "Small Apartments," the biggest victim. His freakish appearance — he frequently wears nothing but underwear and socks — is only further accented by the fact that he's often shown bawling or taking shallow breaths through his mouth. He is proof that Dr. Mennox doesn't know what he's talking about when he says that, in the film's world, "Crazy people don't look any different than normal people [...] They look like you and me." Franklin is disturbed, and in this film, that makes him crazy, and tacky, and ugly, and unworthy of real human kindness.

Even during scenes where he's happy, Franklin is used as a punching bag -- as in a concluding Switzerland-ish fantasy wherein he ogles a trio of blondes who lasciviously grope his alpenhorn. Worse still, when he's shown listening to his last life lesson from Brendan, recorded on a cassette tape marked "The Answer," he's harshly front-lit so that he looks like a monster even before he dabs his moist eyes with $100 bills. But through his oblivious voiceover narration and polite, stuttering dialogue, Franklin reveals that he's smarter and more sensitive than anyone else in the film gives him credit for. This doesn't mean he's a sympathetic character, just more pitiable for his inability to act on his better impulses.

But how do you solve a problem like Franklin Franklin? If you're Akerlund and Millis, you don't even try. He's a disgusting, pathetic little man, which is meant to be funny in a surreal, grotesque kind of way. In reality, "Small Apartments"' torpid, small-minded authorial gods are what's wrong with this unpleasant comedy. Viewers are asked to goggle at contemptuously sketched-out freaks that are oblivious to the ties that bind them.

Not even Brendan's pseudo-enlightening final rant can make the rest of the film's events seem any less gross, mostly because Franklin is soon thereafter shown daydreaming about blowing his instrument while adoring hot chocolate spokeswomen frolic around it. Somewhere, Todd Solondz is weeping.

Simon Abrams is a native New Yorker and a freelance film critic. He contributes regularly to the Village Voice and has had writing featured in Esquire, Time Out New York, and Vulture. 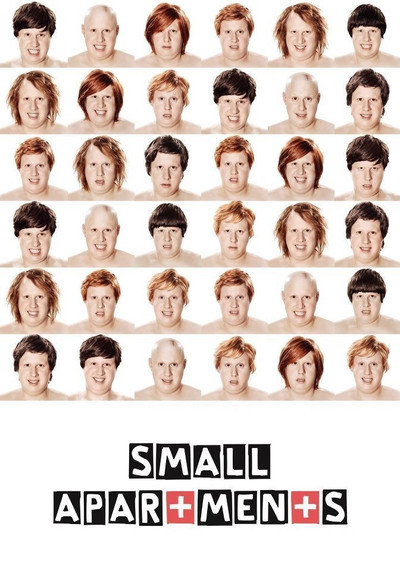 Rated R for language, some violence, sexual content and drug use