The myth of Slender Man is a fascinating modern urban legend. It was created by Eric Knudsen (also known as “Victor Surge”) in 2009 as a “creepypasta” internet meme—sort of the tech age equivalent of ghost stories told around a bonfire. The best horror visions gain a life of their own in the viral age, spreading through email, message boards, Reddit, and sites dedicated to stories designed to keep teenagers up at night. The one about the Slender Man is little more than an update of the boogeyman legend with a bit of kidnapping thrown in to capitalize on stories of missing children. He is a humanoid, faceless, often-suited figure who demands sacrifice and steals little ones, sometimes offering another plane of happiness with him, sometimes pure horror. And the legend of the Slender Man became so prominent that it even allegedly contributed to a real-life attempted murder, chronicled in the documentary “Beware the Slenderman.”

The above intro and a lot of other material you could read or watch about Slender Man is more interesting than the horror movie that would inevitably be made about him, released today by Sony. It’s not that “Slender Man” the movie is abysmal, but those unfamiliar with the legend are likely to walk out wondering what all the fuss is about. Director Sylvain White’s controversial film (one could argue the movie going forward at all was in bad taste given the real-life violence associated with the character) has some visual language that elevates it above some recent, hideously made horror films (looking at you, “Truth or Dare”), but it has so little to say about the internet phenomenon, being a teenage girl in the ‘10s, the boogeyman, the weird sounds cicadas make, you name it. Sporadically, one can see the movie that “Slender Man” could have been, but it disappears like the title character’s victims.

“Slender Man” has a set-up reminiscent of “The Ring” (or “Ringu,” if you’re old school) in that four high school friends watch a cursed video online that’s meant to summon the titular character. It’s not long before they’re hearing and seeing things, particularly when they get close to a tree-lined area that one has to presume is called Creepy Woods. First, the fragile Katie (Annalise Basso) disappears, leading the other three friends into heightened states of panic as to where their friend went and how to get her back. Wren (Joey King) convinces the other two, Chloe (Jaz Sinclair) and Hallie (Julia Goldani Telles), to go into the woods to “sacrifice something they love” to get Katie back. This goes predictably poorly.

Given that the very concept of “Slender Man” is that summoning him basically makes his victims go insane, you might think that the movie would be akin to a cinematic hallucination. It really should look like something from "Twin Peaks: The Return," if you think about it. The movie is certainly at its most interesting when it is unafraid to take some true risks, but those happen far too rarely. The best bits—a supernatural video call, a library sequence that plays with perspective—don’t resonate because they’re often expressed with flat filmmaking and acting.

This is one of those horror films that succumbs to so much bad movie logic, such as forcing the lead character to go on a date with a cute boy in the final act—after two of her friends have disappeared—and never allowing people to turn on lights when they walk into dark rooms. Speaking of that, even some of the interesting imagery in “Slender Man” is underlit, as if the producers were like, “OK, you can get a little weird here, but turn down the lights so we can’t really tell what’s going on.”

The way that the internet has enhanced the spreading of horror stories is a fascinating modern phenomenon, already chronicled in documentaries and even well-adapted into fiction in Syfy’s underrated “Channel Zero” series (an anthology in which each season is based on a creepypasta). As a fan of that show, urban legends, boogeyman movies, and the very concept of ghost stories going viral in the modern age, I should have been the exact right viewer for “Slender Man.” And yet my mind wandered to memories of better, similar films, and it was really only in the moments when "Slender Man" went terribly wrong that it grabbed my attention. After all, nothing is scarier than bad filmmaking. 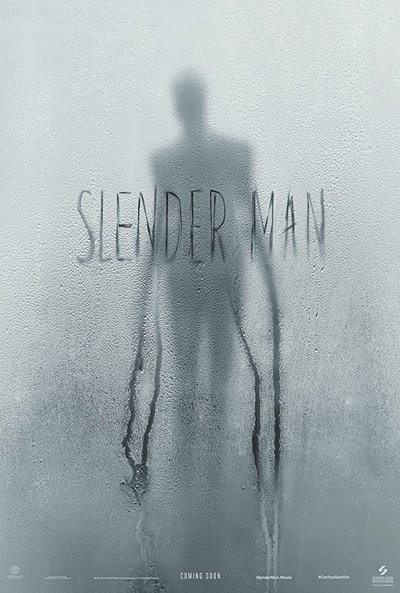