“Skylines” wants what Michael Bay, Paul W.S. Anderson, and other directors of their caliber have. To create B-movie magic, because the “B” now stands for “blockbuster,” with the VFX-heavy spectacle of fighting aliens and flying ships through space. Every bit of this movie yearns to be on the same proverbial shelf as something like Bay “Transformers” or Anderson’s “Resident Evil” films, but it doesn’t do enough to carve out its own space. An alien planet shouldn’t look this rote; same goes with the life-or-death action that happens on it.

But what director Liam O’Donnell has that those genre juggernauts don’t is a bigger sense of humor. Specifically, outtakes after the credits. For all the strait-laced generic sci-fi plotting that unfolds in the previous 105 minutes of “Skylines,” it’s the images of costumes falling apart, green-screen sets, and miffed fight choreography at the end that show how to best receive this movie: a can-do passion project that wants to honor VFX artists as the real heroes (O’Donnell is credited as a VFX supervisor). But when it comes to its own story, well, that’s a far less charismatic pull.

“Skylines” (known in the cr3dits as “SKYLIN3S”) is indeed the third movie in the “Skyline” now-trilogy, which started back in 2010 with a “Cloverfield”-like alien invasion, directed on the cheap by Greg and Colin Strause mostly on the streets of LA. O’Donnell’s directorial debut, “Beyond Skyline” (which also had outtakes), built from that same story about alien ships using massive rays of blue lights to rip people into the sky and then yank out their brains, and focused on human brains and alien physicality might mix. “Skylin3s” continues that intriguing growth of story—even if the movies are ho-hum in their action, they at least show how a franchise can evolve instead of repeating itself.

One of the most inspired ideas in “Beyond Skyline” involved a human-alien baby named Rose who, to quote my review of that equally lacking movie, “grows up really fast.” It’s a great way to establish a new hero (who has some alien powers of her own) without having to gradually age them over a franchise, and makes for a grown-up Rose in “Skylines” (played by Lindsey Morgan), no longer the newborn she was shortly ago. She’s now the key to saving both the aliens (there are good ones) and the human race because of a plot-line that bizarrely involves, yes, a pandemic. The good aliens on Earth, including Rose’s brother Trent, (another tall, squid-like creature with goat legs with Trent’s brain inside), are sick with something that will soon turn them evil against humans unless their beacon is destroyed. This is another idea that's interesting on the outset—a tenuous coexistence of two species previously at war with each other—but it becomes a muddled idea due to O'Donnell's weak character development.

To complete her save-the-world mission, Rose is set up with “the best of the best,” and before you can roll your eyes the movie at yet another cliche (delivered after the leader, played by Alexander Siddig, pours himself a stiff glass of Calm Power Move), "Skylines" goes into a typical introduction of said armed, ready, sometimes sassy teammates. Some of them have British accents, but most of them display personalities the script will later ditch when it’s time to fend off aliens. Their journey takes them into a worm hole and to a planet called Cobalt 1, where evil aliens mill about.

As if stuck to the franchise’s brand of sinister blue light, “Skylines” spends a lot of time with its characters suffocated by a mix of drab black and blues, lessening our worry about what's in the shadows of Cobalt 1. Their first immediate threat is a batch of pseudo-transparent aliens who pop in and out, which would be more sinister if their fuzziness didn’t make them look like they were still rendering in post. Like a lot of the action thrills "Skylines" tries to offer throughout, it's comprehensible, but almost functions mostly to keep your eyes away from noticing the stagey sets, which thankfully later embrace red and bright lights for contrast.

Things are a little brighter back on Earth, where the alien pandemic leads to intermittent, frantic ambush scenes in London that at least take place in daylight. Dr. Mal (Rhona Mitra) has figured out a serum but is trying to hold off attacking aliens; she gets assistance from Elaine (Samantha Jean), who too can fend them off with firepower. This sequence is spread out in the overall story as if it were one big action scene we get as a commercial break from the Cobalt business; like Rose's mission to capture the aliens' egg-like life-source for the aliens, it feels mostly inconsequential. But this subplot does include a special appearance from Indonesian marital arts master Yayan Ruhian, previously of “Beyond Skyline” and “The Raid” movies, who slips around O'Donnell's competent fight scenes and kicks some alien ass. For those keeping track at home, that’s at least more than what J.J. Abrams gave the Ruhian to do in “Star Wars: Episode VII - The Force Awakens.”

“Skylines” trudges to its last showdown between good and evil, give or take a couple betrayals, with corniness as its North Star. All of it is written as if it couldn’t be any other way, and that’s the losing mentality behind this movie—for all the effort into making bombastic sci-fi action without a studio tentpole's budget, it just assumes that people won't miss originality. (The movie is so unoriginal that I realize I had the same complaint for "Beyond Skyline.") And it disregards how directors like Bay and Anderson became popular because they have a style of their own, whether or not it's been applied to some junky products and franchises. O'Donnell's sequel doesn't affirm a grandiose or interesting vision, so much as one that is eagerly ready for hire.

Now available in select theaters, drive-in theaters, on demand, and on digital. 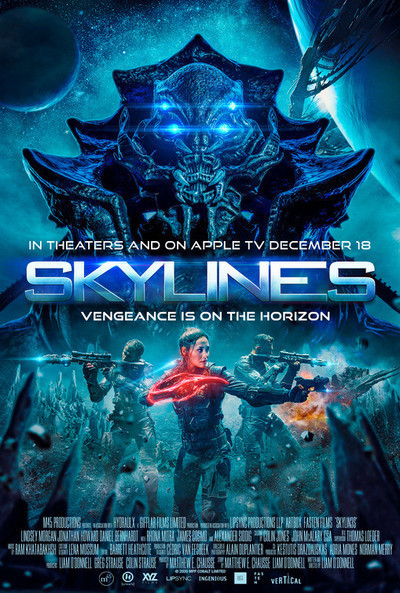