2010’s “Skyline” maintains its unique position in bad movie history as the unlikely boondoggle that somehow made you want to see a sequel. That interest comes from its final moments: the promise of a battle royale between alien monsters, one of them steered by a human's brain. The visual cliffhanger is as grandiose as it is ridiculous, whether or not the homemade sci-fi movie from VFX gurus the Strause brothers could afford it. Still, a genre geek could dream.

For his directorial debut, “Skyline” producer Liam O’Donnell sidesteps the the story originally by himself and co-writer Joshua Cordes, hungry for a similar “cool” that came from the first film’s last audacious moments. This time, he drops the “Cloverfield” vibe of "Skyline" and tries to throw a bunch of action movie craziness into the fray: Frank Grillo (“Captain America: Civil War”), Iko Uwais and Yayan Ruhian (the dynamic Pencak Silat duo from the “Raid” movies) and yes, a granted wish for alien wrestling. But the mix of these giddy ingredients is diluted by its weak storytelling, leaving “Beyond Skyline” with only fleeting moments of genre glee to offer any special reason for it to exist.

The invasion is the same as in the original: large spacecrafts have sucked Los Angeles residents up into the sky using a bright blue light that hypnotizes them. But this movie offers a different on-the-ground perspective, for the most part, as we follow a few different people trying to escape the towering aliens that are slingshotting human beings into their claw-hands or just ripping out their brains. Frank Grillo’s Mark is a grizzled LAPD cop who has just picked up his Tucker Max-looking son Trent (Jonny Weston) from jail when the attack happens. The two then team up with the likes of a subway conductor named Audrey (Bojana Novakovic), and fellow cops like Garcia (Jacob Vargas) and Sandra Jones (Betty Gabriel), not to mention a blind homeless man named Sarge (Antonio Fargas) whose narrative purpose is profoundly cheap.

While not all of these people survive the first 30 minutes of the movie and then get sucked onto the ship, being on board proves to be not the worst fate in the shoulder-shrugging logic of this simple plot thread: eventually the humans find themselves in Laos after they crash an alien spaceship, with a baby that rapidly ages (from the first movie, for all you “Skyline” super fans) that has alien-human blood that could help save the Earth. Even better, Mark, Audrey and others find themselves teaming up with super fighters like Iko Uwais’ Sua and Yayan Ruhian’s The Chief, especially as the aliens bring their battle to turf. This formation of this quasi-super team makes for some spirited, though visually redundant hand-to-claw combat in the final showdown.

Like “Skyline” before it, this movie proves the scope of captivating visuals (both practical and CGI) that can be achieved without a hundred-million dollar budget: the slimy interiors of a cavernous spaceship, the H.R. Giger-inspired, skeletal-looking alien monsters, the eradicated landscape of Los Angeles after an alien visit. That much of “Beyond Skyline” seems composed with a green screen, and not glaringly so, is a credit to a filmmaking team that actively thinks big.

But this is all to dress up what’s a fairly rote sci-fi action script from O’Donnell, with placeholder dialogue, a durable yet dusty macho hero, and a simple plot of evading and then fighting a dull alien menace. While being plainly unfunny in spite of its weirdness or ironic intentions, the life-and-death stakes are played coldly, to the point that some character deaths seem like lazy plot points more than tragedies. The casting of Grillo with Uwais & Yuhan might be the film's most wacky artistic stroke of all. But considering that its most striking idea involves a baby that grows up really fast, “Beyond Skyline” tends to be goofy in the un-fun way.

Tone is a revealing element for this project, which it borrows from the B-movie, apocalyptic seriousness of a later “Transformers” sequel. One of the movie’s biggest surprises is then that it has outtakes, which even include poking fun at how easily the intimidating alien’s costume head can fall off. And while “Beyond Skyline” doesn’t want to look scrappy, it’s dispiriting to see a movie clearly motivated by some audaciousness use its creative powers to add not much of its own spin on the material, whether in regards to creative spin-offs only limited by their imaginations or sci-fi action movies in general. O’Donnell might be able to secure himself a much bigger project in the future because of “Beyond Skyline,” but his ability to have original dreams is still up in the air. 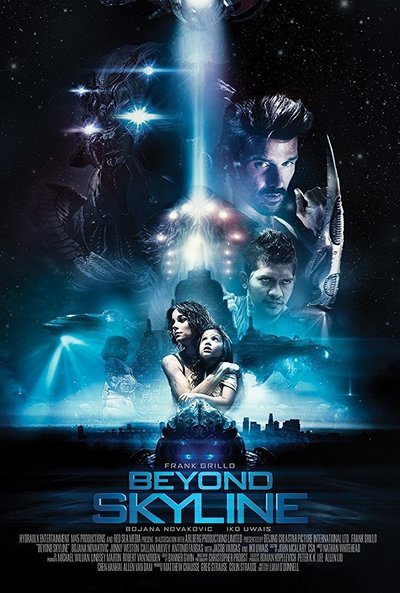 Rated R for sequences of bloody sci-fi violence, and language throughout.

Yayan Ruhian as The Chief