Award for most unappetizing title of the year probably does have to go to "Skinwalker Ranch," which sounds like a place Luke Skywalker retired to make pornographic films in some distant and forgiving galaxy far, far away. But this is actually a movie that is better than its title, a horror film in the "found footage" genre. It does its own miniature version of "The Thing," right down to the tall carrot-type alien figure and the scientist character who cares little about the personal safety of his team and everything about the superior being that is terrorizing them.

The film begins with a fairly lame title that reads: "Warning: The following footage might be disturbing to some viewers." Ranch owner Hoyt Miller (Jon Gries) see his young son spirited away by what seem like alien forces, and there is talk of paranormal activity, "dark" soil, animal mutilations, and other things that go bump in the night. We see a few town people being interviewed about the ranch, and these talking heads skirt dangerously close to Christopher Guest-mockumentary territory without ever settling outright for sketchy comedy or hardscrabble reality.

The expected group of researchers descends on the ranch to investigate, and they start to think that Hoyt might be making things up until they start to experience spooky things themselves. Sometimes it’s difficult to tell if the characters are anxious or if the actors are just trying to remember their lines, but it is clear that everyone believes in what they are doing, and they are doing it to the best of their ability. The people in this movie do not stand out as individuals all that much, but that’s probably because they’re too busy running around and fighting and screaming in fear before they’ve been properly established.

The somewhat charming thing about "Skinwalker Ranch" is that it takes itself seriously. Even though the style is very much paint-by-numbers, with handheld footage alternating with static surveillance shots of various locations on the ranch, the core of the film is sincere. When Hoyt speaks about how sweet his young son was, the movie gains a core of emotion that helps us to care about whether or not the boy gets rescued.

Toward the end of the film, other children are seen who are stuck in some kind of video time warp; people of a certain age and generation will probably be reminded of one of the more frightening live action Walt Disney movies, "The Watcher in the Woods," where a blindfolded girl is trapped in some in-between world and keeps reaching out for help.

The handheld footage keeps breaking up, which is an expected trope of this genre, as if the scariest thing of all for us today would be technological blackout. There is no point in "Skinwalker Ranch" when it seems as if this could actually be found footage, but it does garner a few scares and even a few honest laughs in its rather short running time. If you’re looking for a neat little Halloween movie, you could do worse. 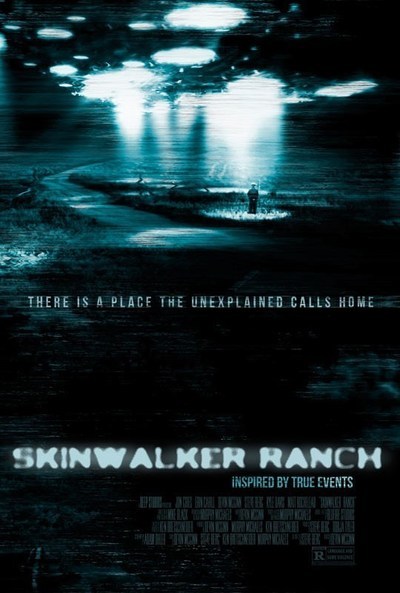