The first time young Prerna (Rachel Saanchita Gupta), a teenage girl living in a small village in Rajasthan, steps on a skateboard, wobbling for balance as she careens down a short dusty slope, her face explodes with joy and exhilaration. Her happiness has more in it than the simple joy of discovery. What you see is Prerna experiencing her first taste of freedom. It's a transformational moment. Nothing will ever be the same again. Later in the film, Prerna says, "Skateboarding saved my life." We believe her because we've already seen it on her face. This is one of the many moving moments in the sensitive and rousing coming-of-age film "Skater Girl," directed by Manjari Makijany, with a script by Makijany and her sister Vinati Makijany.

The catalyst for Prerna's transformational moment is the arrival into the village of Jessica (Amy Maghera), who lives in London, with a high-powered job at a creative agency, and who's come to the village to seek out her father's birth-place and to grapple with her ancestral past. Prerna, on the other hand, lives in near-poverty with her mother, father, and younger brother Ankush (Shafin Patel). Prerna attends school off and on, and therefore has trouble keeping up. Jessica attracts the children of the village, because she's friendly and interested in them. Jessica asks Prerna what she would like to be when she grows up. Prerna is baffled. No one has ever asked her this before. Jessica's friend Erick (Jonathan Readwin), who teaches in the area, shows up in the village on his skateboard. The children flock around him, fascinated by his weird gadget. He gives them a few tips. Jessica hands out a few skateboards. Before you know it, skateboard mania has swept the village.

This is Makijany’s first feature, although she comes to the project with impressive credits as a second unit assistant director for films like "Dunkirk," "Wonder Woman," and "The Dark Knight Rises." Makijany and her sister wanted to tell a story centering skateboarding's rise in popularity all over India, but also wanted to explore the culture clash as well as very specific issues regarding resistance to girls participating in the sport (and girls participating in the wider world in general). Prerna becomes obsessed with skateboarding. Her father says, "Why are you playing with things meant for boys?" Larger forces are converging on the teenage girl. She's almost of marriage-able age. Maybe a marriage will put a stop to all this skateboarding business.

Jessica and Erick look on with wonder at the mayhem they have wrought: children skateboarding all over town, practicing tricks, crashing into passersby, careening down the dusty streets en masse like a triumphant army. The village responds in kind, putting up "No Skateboarding" signs. Erick cracks, "It doesn't matter where you go in the world. Everybody hates skateboards." (A funny detail: the children have been learning about Gandhi in school and are inspired by his example to peacefully protest the skateboard ban, marching through the village shouting, "SKATING IS NOT A CRIME.")  Eventually, Jessica comes up with a daring plan to build a skateboard park in the village. Everyone thinks she is not only crazy, but a busy-body do-gooder outsider. She experiences serious pushback.

The movie separates into two tracks: Jessica's attempts to get funding for the skatepark, and Prerna's attempts to carve out a space in her life where she can skateboard when she likes (this means hiding her skateboard from her parents, sneaking out of the house, etc.). There are many intersecting issues on display: tradition and resistance, change and possibility, but the focus really is on all of the societal pressure girls face—particularly poor girls like Prerna.

But with all of that in place, "Skater Girl" is also just a great movie about skateboarding. It captures the iconoclastic freedom and rebellion skateboarding has so often represented, and it joins a long line of rousing skate films ("Lords of Dogtown," "Wassup Rockers," "Skate Kitchen," and documentaries like "Minding the Gap" and the Oscar-winning short "Learning to Skateboard in a Warzone (If You're a Girl)" about the skateboarding craze among girls in Afghanistan). The metaphorical power of skateboarding is an effective storytelling tool, particularly in coming-of-age movies like "Skater Girl," where skateboarding is awesome and fun in and of itself, but it's also awesome because of what it provides. Skateboarding is not so much a road to fame and fortune, but a literal open road, where you can have an undiluted experience of freedom, independence, and mobility.

Prerna can't go back to her obedient self. Both Jessica and Prerna face serious obstacles in their respective goals. One of the strengths in the script is its sensitivity to nuance. It would have been easy—and lazy—to make Jessica the Savior of the kids of the town, and of Prerna in particular. But the film allows for complexity and is the stronger for it. Prerna has to make the choice to save herself. There is also an interesting side story involving a local businessman who initially refuses to fund the skate park but eventually gets on board because he realizes the venture is going to be popular, and he'll be running for office in upcoming elections. Appealing to a person's self-interest is sometimes the smartest choice! There's also a fascinating scene between Jessica and the wealthy village matriarch Maharani (the wonderful Waheeda Rehman), two very different women coming together to find common ground.

What matters here throughout is the emotion ignited in Prerna, waking her up to life, to herself, to her capabilities. Newcomer Gupta is a revelation, as is Patel, who plays her mischievous and sweet younger brother. Both understand all of the complexities of this story and give beautiful and powerful performances. There may be one too many obstacles placed in Prerna's way (the pet goat is a prime example), stacking the deck against her so there will be an even bigger payoff. But overall "Skater Girl" is so gratifying it doesn't matter. "Skater Girl" operates in predictable ways but the predictability works in its favor, particularly since we really haven't "seen all this before."

The final credits reveal that the skatepark seen in the movie, its construction shown in an inspirational montage, was actually built for the filming of "Skater Girl." And there it still stands, one of India's largest skate parks, the first skatepark in Rajasthan. It's used by the children in the area, by professional skaters, and for championships and competitions. So "Skater Girl" doesn't just tell a story about India's passion for skateboarding. "Skater Girl" has actively helped—in a real-world way, with real-world consequences—to foster the love moving forward. 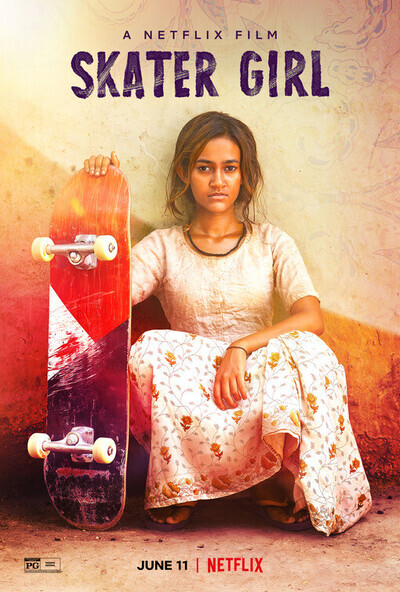