British actor/writer/stand-up comedian Eddie Izzard grew up in Bexhill-on-Sea, East Sussex, along the English channel. Thirty years earlier, the town was home to Augusta Victoria College, a finishing school for upper-class German girls. The students were from some of Germany's highest-ranking and most powerful families. It lasted until 1939, when Germany's invasion of Poland made it impossible to prevent war.

"Six Minutes to Midnight" is Izzard's imagined spy story inspired by the school. She co-wrote the screenplay with director Andy Goddard and co-star Celyn Jones, and she stars as a teacher named Thomas Miller. It is set in August, 1939, which we in present day understand is just days before the start of WWII.

Miller's predecessor was found dead on the beach. In an interview with Miss Rocholl (Judi Dench), the only important question is "What sort of Englishman would accept a post teaching Hitler's League of German Girls?" Miller responds, in German, that his father was German. Whether that's an adequate answer or whether Rocholl has no alternative, Miller gets the job and is in the classroom moments later. Astrid (Maria Dragus), arrogant and seen by the other girls as their leader, is quick to dismiss him. "The Führer would say he isn't man enough," she whispers to a classmate in German, assuming he cannot understand the language. But he shows her he speaks it as well as she does, and she settles down, or seems to.

The movie tells us at least three different stories at once and the spy story is the least interesting. At first, the arrival of the new teacher has a "Jane Eyre" tone, with Miller as a (relatively) naive outsider coming to a dark and foreboding old building filled with secrets. Then there's the real-life history of the school, part of a plan for a "soft power" incursion into Great Britain at a time when the strategy of appeasement and some of England's wealthy and powerful elites were very sympathetic to Hitler. Cinematographer Chris Seager is especially effective with these two moods. He shows us the girls lined up on the sand, their regimental movements a striking contrast to the natural beauty of the shore and the casual beachgoers from the town. "Appropriate intention makes the appropriate impression," Rocholl tells the girls as they practice balancing books on their heads as they walk, to ensure correct posture. Intention, impression, and the sometimes-contrasting underlying reality are explored throughout the film.

It's less effective in the run-with-a-gun scenes, as is the acting and the writing, which all fall off sharply in the final third. The issues of individual, cultural, and national loyalty—and when and how to respond to aggressive actions by other nations—are relegated to the background of some weak chase scenes and plot twists. Those issues are touched on with the help of different actors: Jim Broadbent's bus driver character briefly brightens the storyline; Dench tries to explain that the "Sieg Heil!" salute is just an expression of pride; and James D'Arcy has some fun with an implacable detective. "Why should we criticize a country that strives to be great?" Rocholl asks Miller. She says her school is dedicated to protecting the girls from the outside world. But as Trotsky said, you may not be interested in war, but war is interested in you.

Movies set in the past or future cannot help being about where we are now. Even those based in history are filtered through current concerns and our ineradicable knowledge of how things turned out. The title "Six Minutes to Midnight" is a reckoning; a reminder of the Doomsday clock that—more than eight decades after the setting of this film—is less than two minutes to the end. If we are to do better than that, we will need films that focus more directly on the questions this one pushes to the side.

Now playing in select theaters and available on VOD. 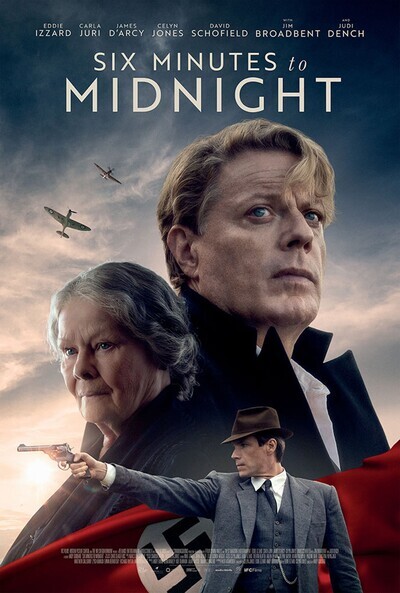 Rated PG-13 for some violence.