Our dreams as children are often not the same as our dreams when we’re teenagers, and our dreams when we’re teenagers are often not the same as our dreams when we’re adults. Growing pains are difficult for everyone, let alone when you add in the pressures of competitive sports and housing insecurity, as experienced by the titular subjects in the documentary “Sisters on Track.” Directors Tone Grøttjord-Glenne and Corinne van der Borch follow track stars Tai, Rainn, and Brooke Sheppard during their transition from tweens to teens, following the sisters for two years as they prepare for the Junior Olympics after moving out of a homeless shelter. Although “Sisters on Track” has some gaps in its narrative that seem as if certain chunks of the girls’ lives were compressed or skipped over, it's most impactful when offering a thoughtful analysis of the rapidity with which children grow, adapt, and change.

In 2016, the Sheppard sisters burst onto the track and field scene in the U.S. After their babysitter signed them up for the sport on a whim, the girls took to it, gaining national attention after their wins at the Junior Olympics and being named “SportsKids of the Year” by Sports Illustrated Kids magazine. When “Sisters on Track” begins, the Sheppard sisters, who were living in a homeless shelter with their mom Tonia Handy, appear on “The View.” While getting their makeup done backstage, the girls are excited, giddy, and chatty, and explode into screams of joy when Whoopi Goldberg informs them that filmmaker Tyler Perry has secured them a furnished two-bedroom apartment and will be paying the rent for two years. This moment in spring 2017 is the launching pad for “Sisters on Track,” which follows the family as they try to balance the demands of everyday life and the girls’ highly regimented track and field schedule.

Tonia, who escaped an abusive relationship and refuses to date again until the girls are grown, tries to save all she can from her minimum-wage job, knowing that two years will pass quickly. Single-handedly supporting three daughters in New York City means an array of expenses—everything from braces to bookbags—and planning for the girls’ future includes a whole other set of costs. Private high schools would best prepare the older Tai and Rainn (12 and 11 years old, respectively, when “Sisters on Track” begins) for college, but scholarship spots are limited. Running outfits, sneakers, and travel to meets also add up. “Sisters on Track” never gets nitty-gritty into the numbers—there’s no explicit scene of, say, Tonia whipping out a checkbook and balancing the girls’ expenses—but there is an undercurrent of tension throughout the documentary that clearly is inspired by the cascading costs of youth sports.

While Tonia shoulders all the demands of being a single mother, “Sisters on Track” also follows the girls as they train and compete as members of the Jeuness Track Club in Brooklyn. Onscreen text informs us of the events the girls are practicing for, like the 800m or relay, and Grøttjord-Glenne and van der Borch often set up in one area of the track and use wide-angle compositions to capture the girls as they run alongside their teammates and competitors. Most of the time in the club is spent alongside Coach Jean, an administrative law judge who for 33 years has volunteered as a mentor, guide, and advocate for the girls who are part of Jeuness. “How would the girls describe me? Mean, nice, loud, caring, fun, scary,” she says with a laugh, and she certainly is all those things over the course of “Sisters on Track.” Most of the film’s humor comes from Coach Jean’s no-nonsense attitude, like her analysis of the girls’ body positioning before a relay handoff: “You’re standing there like the Statue of freaking Liberty!”

Coach Jean has a tight bond with each Sheppard girl, knowing the ins and outs of their running style and their work ethic. “When they first came on the team, they were a hot mess,” she says, and the personalized advice she gives the sisters—although often challenging—is clearly rooted in affection and support. Certain scenes also show how much more Coach Jean does for her team: she walks them through information about puberty and menstruation (“Everybody know where their vagina is? Point in that direction!”); she leads a book club in which the girls read the bestselling novel The Hate U Give and talks to them about their racial identity and code-switching among white peers; and she counsels the girls’ parents (mostly mothers, in a subtle bit of social commentary) about how to secure scholarships and financial aid when applying to high school and college.

All of this serves to make Coach Jean seem quite saintly indeed, and to be sure, she is an exceptional guiding force in the Sheppard sisters’ lives. Over the entire course of “Sisters on Track,” from spring 2017 through summer 2019, Coach Jean and her sister, Coach Karel, are there for the girls: through Rainn’s growth spurt, Brooke’s battle for more attention compared with her older sisters, and Tai’s increasing interest in boys and disinterest in the sport. The wrinkle in this approach, though, is that the back half of “Sisters on Track,” as the girls get older, seems to focus more on Coach Jean talking about the girls than it does on the girls themselves.

Is this because cameras weren’t rolling when these events occurred? Possibly. But it’s slightly anticlimactic that certain major developments in the girls’ lives are delivered through casual dialogue, and with little fanfare: a debilitating knee injury sidelines Rainn for months; Tai cuts school a little too often and gets in trouble with her guidance counselor; the high school that the girls hope to attend unexpectedly closes, leaving them scrambling. Only hearing those events described makes for some imbalance when the final half-hour or so of “Sisters on Track” is so heavily focused on how the family’s and Coach Jean’s reactions to those three occurrences affect the girls’ performance at the Junior Olympics. And the documentary’s endpoint, which seems synced up with the two-year timeline during which Perry paid the family’s rent, feels a little arbitrary.

Still, “Sisters on Track” delivers an array of quietly revealing moments: Brooke admitting her anxiety while living in the homeless shelter; Tonia looking away from the camera as she describes her bond with her son, who died; Tai’s closet full of running shoes she’s outgrown; all the girls raising their hands when Coach Jean asks who among them will go to college. The inspirational and illuminating moments of “Sisters on Track” land well enough, even if what surrounds them isn’t as comprehensive as a full portrait requires. 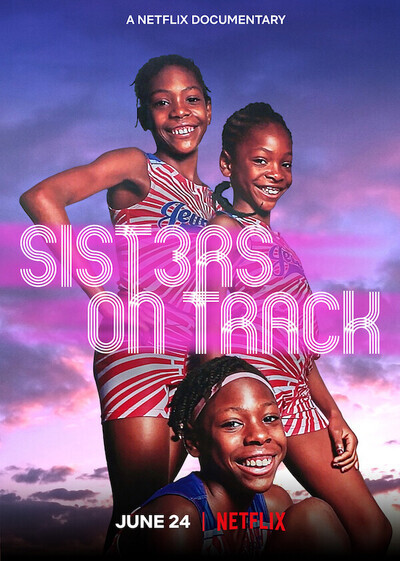