In November, 2008, the New York Times profiled the Accolade, "Saudi Arabia’s first all-girl rock band." The four girls, who didn't show their faces in the photograph accompanying the article, were doing their best to chip away at Saudi taboos regarding women performing onstage, men and women mixing in public, women doing anything outside the home. My brother read the article, and said, "Right now, the Accolade is the greatest rock band in the world." Popular music—be it rock 'n roll, punk rock, heavy metal or hip hop, particularly in their initial introductions into the scene—represents an explicit challenge to authority. When parents, teachers, politicians, and mullahs proclaim this music is "dangerous," they aren't wrong. It is dangerous. It is a threat to their conformist authoritarian status quo. Music is a form of self-expression, and self-expression, once unleashed, can't be silenced, not without a fight. The Accolade had released only one or two singles through their MySpace page, but an entire culture amassed against them, and in their persistence and courage they represented the spirit of rock in almost its Platonic ideal. And so, too, do Slave to Sirens, an all-female thrash metal band based in Lebanon, and the focus of Rita Baghdadi's engaging documentary "Sirens."

There isn't a "place" for a band like Slave to Sirens. There isn't a big metal scene in Lebanon (or in the Middle East as a whole), and there certainly isn't a big scene for women in metal, period. As one of the girls' fathers observes, if the five members of Slave to Sirens had decided to form a pop band, they would have been greeted with a much more welcoming response. But what's a head-banging woman to do? The band members are inspired by Anthrax, Slayer, AC/DC. They can't force themselves to be inspired by Ariana Grande, for example. Inspiration doesn't work like that. They've chosen a lonely path. But an interaction with a young male fan who approaches them before a show, asking for an autograph, telling them how much he loves what they are doing, speaks volumes. His face is filled with so much emotion it's practically awe. He can't believe he's seeing these women in the flesh. This band means something to its fans.

Shery Bechara and Lilas Mayassi, the co-founders of Sirens, and lead and rhythm guitarist respectively, first met in 2015 at an anti-government protest, and quickly discovered their shared love of thrash metal. They started writing songs and joined up with fellow-traveler kindred spirits, lead vocalist Maya Khairallah, whose unearthly howls scream up from the deep, bassist Alma Doumani, and drummer Tatyana Boughab. This is a tight unit. Even holding rehearsals is a challenge: neighbors complain about the noise, and the overall crumbling infrastructure doesn't help. In a city where electricity has a tendency to go off with no warning, plugging in an amplifier is a risk.

The powers-that-be in Lebanon are so hostile to heavy metal music it's practically government policy. The attitude is similar to what was going on in the 1980s-90s "Satanic panic" in the United States, which indirectly—or directly—led to the West Memphis Three being convicted of murder mainly because they wore eyeliner and liked Metallica's music. This kind of thing has a long pedigree (Marilyn Manson being blamed for the Columbine killers' psychopathy, etc.) Lebanese Christian organizations protested heavy metal and grunge, managing to get much of it—Metallica included—banned, or at least their CDs seized at customs. The hangover of this era still exists in Lebanon. It's bad enough that these five young women have opted out of the traditional path—marriage, babies—but they are also playing what is considered by many to be the Devil's music.

Facing all of these odds, Slave to Sirens do everything themselves. They shoot their own music videos. They released a four-song EP in 2018, and are glued to their phones, trying to set up gigs. Very few venues show any interest in heavy metal bands. Club owners don't want the flak from the religious groups. The band works hard to avoid "metal cliches" in song construction, pacing, and sound. They watch videos of themselves performing. They critique one another. Their work ethic is admirable. Early on, the band gets a gig at the legendary Glastonbury festival, but their sole show is at noon, not exactly prime time. They play to about 20 people. As depressed as the band members are afterwards, what's important is that they play for those 20 people as though they're playing for thousands in a stadium. You don't magically become a star. You have to believe you are one already. These women do.

Baghdadi embedded herself with the band, or, more specifically, with Bechara and Mayassi. Mayassi still lives at home, and hides that she is a lesbian from her obviously worried mother. Bechara and Mayassi's dynamic can be explosive. At one point, Bechara leaves the band. She can't take the tension anymore. Bechara is the songwriter, the one who pushes and challenges everyone else to improve. Her presence is sorely missed. Bands go through this stuff all the time. One wishes for more in-depth profiles of the other three band members, who remain peripheral presences at best in the film. (Revolver profiled the band in 2019, so if you want to know more about the lead singer, bassist, and drummer that's a good place to start. Everyone's journey is fascinating.)

Footage of the band is interspersed throughout with footage of the upheaval in Lebanon, the economic collapse, the street protests, riot police, smoke bombs, and an environment Mayassi refers to as "inherited trauma" from her parents' generation. All of this has led to a "cycle of fear." The protests against Article 534, making illegal “any sexual intercourse contrary to the order of nature,” is the air these women breathe. Bechara and Mayassi, chatting on the street about Mayassi's hookup the night before, keep shushing each other automatically, in between giggles. Romance is not impossible, but it is dangerous. The August 4, 2020 port explosion in Beirut, resulting in over 215 casualties, devastates the city, bringing all the other protests into sharp relief. Two years later, and there's still no justice for the victims. "Sirens" is dedicated to those killed by the blast.

Baghdadi and lead editor Grace Zahrah piece together the footage into a collage of yearning, ambition, and what can only be called gumption. It's inspirational, of course, but it's also thoughtful and meditative. There's beauty in the footage of Mayassi and her Syrian girlfriend swimming in the sea, playful and free. But the beauty is pierced with fragility and even danger. The women speak their feelings in voiceover (there are no "talking heads," a welcome change), and Baghdadi's approach shows the spirit of artistic collaboration and problem-solving, as well as a commitment to compromise so their work as a band can continue.

Heavy metal, with its bombastic howls, darkness, and anguish, is—for Slave to Sirens—the most appropriate sound to express their feelings. Judas Priest lead vocalist Rob Halford said that heavy metal "at its core [is] all about a primitive connection we all need to keep in our lives." Slave to Sirens music is not an escape. It's a simultaneous reaction to and reflection of reality. Pop tunes just won't cut it. 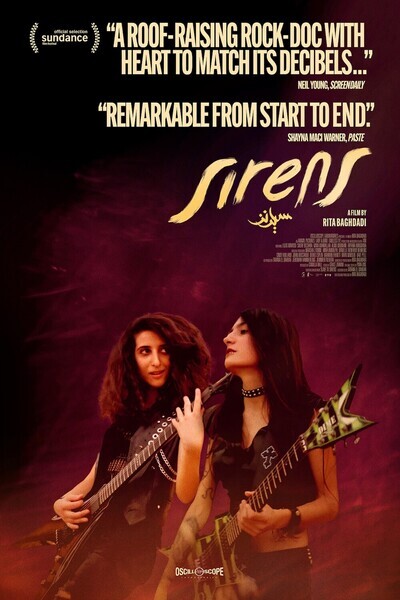 Shery Bechara as Self