Love is blind and so's this sociopath

"Simon Killer," a maddeningly short-sighted character study about a disturbed young American in Paris, is consistently unsettling, but not always for the right reasons. Writer-director Antonio Campos ("Afterschool") takes great pains to establish his antihero protagonist, Simon (Brady Corbet), as a voyeur with a very limited field of vision. The film's rocky first half hour establishes Simon as a socially awkward, self-involved character with a myopic worldview.

But Simon's inconsistency of vision isn't entirely his fault: while being a narcissist certainly doesn't help, Simon can only know so much because he can only perceive so much. Campos accordingly presents the film's events from a chilly, deliberately limited third-person perspective typified by slow-moving camerawork, and claustrophobic framing that reveals only fragments. In other words, we're frequently prevented from seeing characters' heads, shoulders, knees and toes. So, we're meant to feel as trapped in the film's obtuse world as Simon does.

A bad break-up sends Simon fleeing to Paris, where he agrees to housesit for Carlo (Nicolas Ronchi), a family friend. Within a week, Simon develops a relationship with Marianne (Constance Rousseau), a prostitute he meets in a bar-cum-brothel. Simon believes Marianne when she tells him that having sex with Simon will be a real pleasure as he's much more attractive than her usual clientele.

But while Marianne's troubled past explains her attraction to the deceptively shy Simon, that doesn't make their relationship is believable. There's no great chemistry between them. Still, their romance is supposed to be tentative, so the ambiguous nature of their relationship is intentional, if not wholly successful. Marianne eventually agrees to Simon's ill-conceived plan to blackmail some of her wealthier clients.

Campos overzealously frustrates his viewers' need to understand what motivates Simon and Marianne. He only shows viewers as much as he feels is necessary for any given scene. It's equally hard to watch Simon wander around Paris, as we're constantly reminded that we are seeing events through a strictly-maintained aesthetic filter. Campos combines partial, behind-the-back views of Simon with a blaring electronic soundtrack only serves to over-emphasize the film's constricted point of view. Yeah, we get it.

The best scenes in "Simon Killer" get out of the sociopathic title character's way and allow him to speak for himself. This is particularly true of some direct, unsparingly honest conversations between Simon and Marianne. In their first meeting, one of a handful that put Rousseau and Corbet together in the same shot, is effectively ambiguous without being overbearing. It's an exception in a film that can otherwise be described as a relentless and largely unrewarding descent into an ostensibly personal hell. 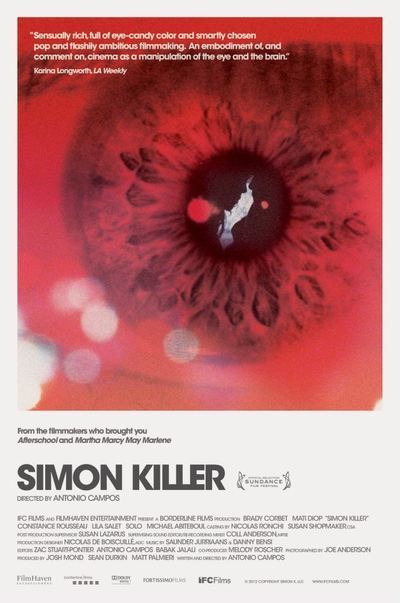