“Shock and Awe,” a drama directed by and co-starring Rob Reiner, would have received only two stars from this reviewer but for something that happens in its last couple of minutes. As often occurs in movies based on real events, the filmmakers conclude their drama and then, under the end credits, show us news footage of the events’ actual people. In this case, those include four reporters from Knight-Ridder Newspapers who probed and questioned the lead-up to the Iraq War when outfits like the New York Times, Washington Post and the major TV networks were simply spewing lies fed them by the George W. Bush administration.

The interviewees also include the infamous Judith Miller, the Times’ fabricator in chief, who blandly allows that the Knight-Ridder guys were “the only ones who got it right.”

So I added an extra half-star for this coda’s potent reminder that the story that Reiner’s film has to tell is one of incredible importance. If the Iraq War was, in the words of one former general, “the greatest strategic blunder in American history,” it might also be characterized as the most disgraceful episode in the history of American journalism. Acting as if they learned not a single lesson from revealing the lies that led to America into the Vietnam War, or those that accompanied the Nixon administration’s attempts to subvert the Constitution during the Watergate scandal, the Times and the Post—and most similar news outlets—rolled over for malevolent fraudsters like Dick Cheney and Donald Rumsfeld and helped lead the U.S. into a devastating war based on patently specious evidence of Saddam Hussein’s non-existent weapons of the mass destruction.

Though the subject is indeed important, the filmmaking here is so pedestrian, flat-footed and overly-obvious as to leave “Shock and Awe” one of those second-rate dramatic movies that make you wish that it had been a top-notch documentary instead.

The film opens with a young, wheelchair-bound African-American veteran (Luke Tennie) testifying before a Congressional committee. In the first of many cinematic cliches that dot the film, he starts to read a written speech, then puts it down in order to speak extemporaneously—and launches into an exposition-heavy monologue that sounds even more scripted.

The story proper begins when we flash back to, you guessed it, the attacks of 9/11. Every major news organization is instantly catapulted into covering the story and trying to understand the catastrophe and the U.S. response to it. In the cases of Knight-Ridder reporters Jonathan Landay (Woody Harrelson) and Warren Strobel (James Marsden) and their feisty editor John Walcott (Reiner), that means noting how the failed attempt to nail Osama bin Laden and his al-Qaeda henchmen, the crimes’ actual perpetrators, in Afghanistan lead—conveniently?—to an effort to blame and pump up the danger supposedly posed by Iraqi dictator Saddam Hussein.

In piecing together the mounting evidence of the fraudulence of the rush to war with Saddam, Landay and Strobel dash around Washington in typical movie-reporter fashion, comparing notes with each other and with Walcott after talking with various insiders, most of whom are not named but identified only as “U.S. Official” or such. Since the movie is supposedly based on the recollections of the main characters—who also include a caustic veteran reporter, Joe Galloway (Tommy Lee Jones)—it’s curious that such anonymity must be maintained this long after the fact.

Screenwriter Joey Hartstone, who scripted Reiner’s flawed but altogether more successful “LBJ,” has a knack for writing crisp, flavorful dialogue. But in addition to falling into the common historical-screenwriter’s trap of conveying too much information in big blocks of turgid speechifying, he must also be faulted for some tension-killing digressions such as the coy romance between Strobel and his cute neighbor (Jessica Biel), which might have come out of a 1950s Hollywood movie.

The film’s script, though, must be credited with some surprising inclusions. For one, a couple of mentions are made of the malign influence of Israel on American foreign policy. For another, when it comes time for Congress to vote on approving Bush’s war plans, we’re given the sad roll call of the Democrats who voted in favor: Hillary Clinton, Joe Biden, John Kerry, Joe Lieberman, and so on.

From a historical perspective, this disgraceful tale climaxed with General Colin Powell testifying in support of the fake intelligence regarding Saddam’s WMD, which echoed Condoleeza Rice’s warnings of mushroom clouds blossoming over America if Saddam wasn’t stopped. “Shock and Awe” reminds us all of this, and of the American media’s shameful complicity in fomenting an unjustified and vastly destructive war. But it also includes such moments as Sen. Robert Byrd’s moving speech drawing parallels between the lies that drew America into its Vietnam debacle and the falsehoods that would destroy many American and Iraqi lives in Iraq. At the current moment, when a president who lies constantly has his finger on the nuclear trigger, such warnings could not be timelier. 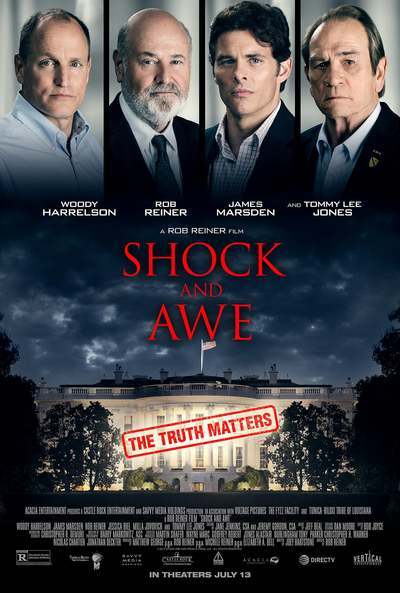 Richard Schiff as The Usual