For some moviegoers, the Japanese superhero-vs.-monsters mashup “Shin Ultraman” arrives with high expectations. Ultraman is a now decades-old and multi-franchise-topping “tokusatsu” icon. And even if you don’t know the character’s name, you might recognize him by sight, particularly his skin-tight silver jump-suit, his Lite-Brite bug eyes, and his dorsal fin-shaped bullet head. The title of “Shin Ultraman” also conjures certain associations since it’s the second film in a narratively unrelated trilogy of Japanese sci-fi reboots, made after the modern disaster pic “Shin Godzilla” and before the upcoming “Shin Kamen Rider.”

You don’t need to know any of this to enjoy “Shin Ultraman.” Director Shinji Higuchi knows that you can’t recapture the pre-adolescent wonder that Ultraman brings to mind for initiated viewers. (He even said as much to me last year). Instead, his Ultraman movie, scripted by “Shin Godzilla” co-director/co-writer Hideaki Anno, is an accessible, episodic action-adventure that re-imagines humanity’s first contact with its title character, a selfless extra-terrestrial hero.

“Shin Ultraman” is essentially a kid-friendly parable about how surreal and labyrinthine our world seems when contrasted with the child-like simplicity of a mute hero who can grow really tall and shoots lasers from his karate-chopping hands. “Shin Ultraman” is also a superior giant monster movie, replete with colorful reptilian and squid-like monsters.

Higuchi and Anno’s latest high-toned pastiche starts with a dizzying montage of pleasure-center-dinging retro signifiers and images. A conga line of aliens has crash-landed in Japan, so now the Japanese government must figure out how to stop these creatures from destroying everything around them. We hear that show’s surf-guitar-and-musical-saw-infused orchestral theme music and also see some of the flamboyant monsters from “Ultra Q,” the black-and-white 1966 monster-of-the-week serial that preceded the first “Ultraman” TV show. (He’s not featured in “Ultra Q”).

We’re also introduced to the human members of SSSP, the S-Class Species Suppression Protocol enforcement unit, a five-person team whose main job is tracking our alien visitors and coordinating the Japanese government’s response. The SSSP’s members soon find an ally in Ultraman (played by Anno and original “Ultraman” actor Bin Furuya), who shares a mysterious bond with square-jawed expert Shinji Kaminaga (Takumi Saitoh) and his self-appointed “buddy,” Hiroko Asami (Masami Nagasawa). Unfortunately, Ultraman also quickly draws his fellow E.T.’s interest. They try to seduce and then subjugate humanity’s weakest links, our politicians. Ultraman picks up the slack and fights for us.

“Shin Ultraman” doesn’t stray far from the well-entrenched conventions of Japanese monster movies. Scientists, military officials, and other stuffed shirts gawk at computer screens and provide breathless expository commentary. There’s also a remarkable level of storytelling craft and narrative construction on display even in the human-focused scenes, which are presented in a flurry of fast-cut but visually stark imagery. Sometimes the camera is on the floor looking up at the SSSP team, hunched over their laptop computers; sometimes the camera’s across the room from its human subjects. There's no normal in this perpetually escalating scenario, just constant movement and restlessly shifting points of view.

That relentless pace and crazed presentation reflects how Ultraman’s presence might be received by technology-addicted humans. We still have to peek around corners and gawk at incomplete pictures of whatever’s happening, even with all the screens, phones, and cameras available to us. People act like they're in charge here, but they are swiftly reminded of their limited grasp on reality.

Higuchi and Anno’s alien monsters also talk and act with an appropriate mix of child-like simplicity and adult-friendly portentousness. Haughty alien villains, like Zarab and Mefilas, remind Shinji of the galactic threat that humanity poses. We see Ultraman and his monster friends as potential weapons, just like the aliens see us as natural resources.

Each monster fight then confirms what Ultraman fans already know: he’s always there to take a punch for you, a messianic stoic whose concern for humanity is usually communicated with a brief but meaningful over-the-shoulder look. Ultraman doesn't talk. He doesn't even make mouth noises, just a white-noise whine that his body produces as he glides through the air like an unmanned jet. Ultraman behaves like a child’s dream of heroism: he’s inhuman and fleet, completely dependable, and instantly understood.

Higuchi's camerawork during the kaiju scene is equally consistent and dynamic. He's clearly thought about how to animate Ultraman’s monsters—those goggle-eyed faces, string-bean torsos, and pin-wheeling limbs—with a combination of motion-capture technology and computer graphics. So, when Ultraman inevitably grapples with monsters, you can not only see but also enjoy watching him do what he does.

Higuchi and Anno not only deliver the genre movie goods but also deftly preserve their title character’s sugary purity. Rather than gigantify what was always juvenile material, "Shin Ultraman" allows the iconic character to retain his original shape and proportions. You and your dad are gonna love the new Ultraman movie.

In limited release via Fathom Events tonight and tomorrow, January 11 and 12. 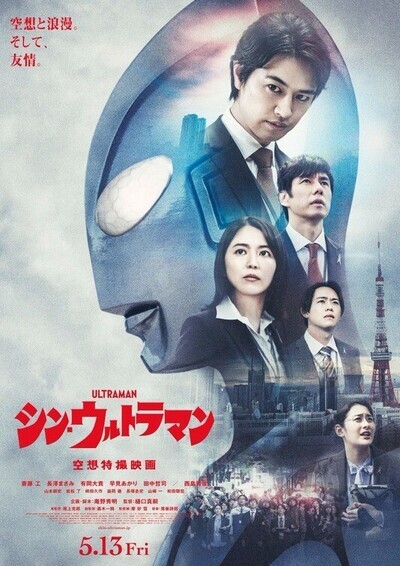