Any lifelong fan of superheroes has at one point wanted to be one—to suddenly have superpowers, to fight evil, to do what ordinary humans can’t do. It’s a fantasy that’s directly entertained by “Shazam!”, as director David F. Sandberg puts the premise of “Big” into the DC Cinematic Universe as it continues to expand and lighten up. But while “Shazam!” is goofier (and darker) than it may look, you'll wish its superhero came with a little more spark.

Before its heroes and villains, “Shazam!” is all about family. Asher Angel’s Billy Batson is the most clean-cut troublemaker you can find in movies these days, pranking Philadelphia cops and causing a ruckus for social workers. He’s soon welcomed into a foster home by parents Rosa (Marta Milans) and Victor (Cooper Andrews) who have a supportive and spunky makeshift family of their own, including the precocious Darla (Faithe Herman) and the video game-addicted Eugene (Ian Chen). Billy shares a room with the sarcastic Freddy (Jack Dylan Glazer), who is a DC super fan, and even has some Superman and Batman paraphernalia. And yet in spite of the love around him, Billy’s biggest goal is to break out and find the biological mother who abandoned him years ago. Mixing Billy’s pain with the warmth of his new home, “Shazam!” creates a sweet message about how you choose the family that’s around you, not unlike Hirokazu Kore-eda’s Oscar-nominated “Shoplifters.”

Superpowers come into Billy’s life randomly, and that’s just how “Shazam!” functions—while escaping on the subway from some bullies who picked on Freddy, Billy is transported to the Rock of Eternity, the lair of the Wizard Shazam (Djimon Hounsou). The stoic, incredibly serious wizard transfers his powers to Billy because he finds Billy “pure of heart.” When Billy says the wizard’s name, Billy can transform from a teenager into a classic-looking hero (Zachary Levi) with red spandex, a bright lightning bolt on his chest and a cape, not to mention a bunch of powers that Billy figures out with the help of Freddy.

Billy isn’t alone, though. The maniacal Dr. Thaddeus Sivana (Mark Strong) has found a way to the wizard’s cave without having to be invited, after experiencing his own random selection as a young boy in a very striking opening sequence that ends with a car accident and him hating his brother and father. After creating his own portal out of thin air (one of many scenes where the special effects here are aces), Dr. Sivana unleashes the Seven Deadly Sins that sat dormant in the lair, the seven spirits changing from their large gargoyle-like presence into an evil that Dr. Sivana can carry around in his right eye. When he finds out that someone has similar powers to his own, he starts to hunt Shazam down, not knowing Shazam is actually a teenage boy.

Levi has the very tricky role of playing a literal image of arrested development, pretending to be a teenager whenever Billy activates the Shazam identity. He doesn’t exactly pull it off—I had to remind myself more than a few times that he’s meant to be thinking and acting like a teenager, instead of how he presents himself, as an excitable, slap-happy adult whose voice squeaks in the face of shenanigans or danger. Some jokes about Shazam’s self-discovery do work, and when he’s bouncing off the unamused intensity of Mark Strong, it has a noteworthy comic balance. But one can see how the action and comedy of “Shazam!” would work better if Billy felt like a shared idea between both actors.

Like Levi’s performance, “Shazam!” tries to charm by being a little extra. When Dr. Sivana goes to a family company meeting it ends with heads being ripped off; when bullies pick on Freddy at school they clip him with their truck first and then leave it parked in an illegal spot; when Billy finds out he’s invincible to bullets, he asks would-be convenience store robbers to shoot him in the face. It’s an attitude that makes for an entertaining, rambunctious, and unpredictable first half—you could step out for popcorn during a foster family bonding moment, and come back to a deadly-serious, ‘80s-tastic fantasy wizard scene. But it’s a testament to the scope of the “Annabelle: Creation” director that no ingredient feels out of place, that the bright red of Billy’s hoodie used to foreshadow his superhero costume is as much a definitive part of the color palette as the creepy darkness that Dr. Sivana brings with him to every scene. When it’s all mixed together, they make “Shazam!” into a whole lot of movie.

But there’s a wholesale quality that nearly defeats “Shazam!”, regardless of whether some lore is related to previous iterations of the character. Were the Seven Deadly Sins the only ones available from the villain rolodex? And why are they so rote, these gloopy gray-green demon beings who look like someone didn’t finish visualizing them? Then there’s Shazam’s dull powers, that he can run really fast, has super strength, or he can fly—the super basics. “Shazam!” tries to get around this void with its discovery-of-maturity “Big” storyline, and guidance from motormouth Freddy in how to be a superhero, but it all plays like “Deadpool 2” and “Spider-Man: Into the Spider-Verse” before it, where another script expects big laughs for making the heroes self-aware, and only gets a few chuckles in return.

And it’s no coincidence with the recent “Captain Marvel” that “Shazam!” goes without an official name for its superhero until the very end, as it’s all related to a headache in comics history regarding his original name, Captain Marvel, and Marvel’s “Captain Marvel.” Here, the name-goof highlights a generic quality for a superhero whose most stand-out element is his secret identity—a boy who wants to find his biological mother almost more than doing proper superhero stuff. He’s a placeholder that DC wants to frame as an underdog; keep an eye out for how many Batman or Superman backpacks you see in Billy’s school, or mentions of the heroes when it comes to describing what makes a superhero. Shazam’s name might be the title, but even the movie’s final note has him playing second fiddle.

About that third act—part of the intrigue in “Shazam!” is in watching a young person who doesn’t know much better learn to use their powers for good and not just yuk-yuks, like when Shazam does tricks for tips shooting lightning out of his fingers. When the movie confirms how it will make a sequel about this same storyline for new characters, "Shazam!" takes its full cheesy form, as much as Sandberg's camera swoops around a Christmas carnival-turned- battleground set piece like it's been attached to the scrambler ride. “Shazam!” slows down when it should be ramping up, its action proving to be less inspired than the zippy dialogue between Billy’s makeshift family, or moments in which Dr. Sivana goes all-in on being evil. The big showdown between Dr. Sivana and Shazam especially is as mindless as when a kid nearby is shown smashing Batman and Superman action figures together, one of that final battle’s visual moments of comic relief.

Still, there’s a fair share of fun to be had with “Shazam!” as a comedy about superhero growing pains from a comic book company also figuring itself out cinematically. But while it’s a nice step away from the blunt machismo of earlier DC fare, it’s a noticeable downgrade in imagination from James Wan’s “Aquaman" and that film’s $200 million-version of daydreaming while playing with your toys in a swimming pool. Compared to any of its super peers, “Shazam!” is more straight-forward with its purpose and significance: it’s the blockbuster version of plopping down in front of a Saturday morning cartoon, watching an archetypal caped crusader save the day. All the while you slurp your sugary cereal, an act of killing time before the next major superhero story comes to theaters. 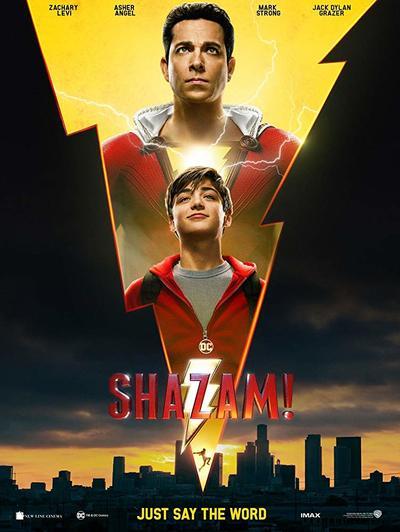 Djimon Hounsou as The Wizard