Rob Stewart, who died in 2017 in a diving accident at age 37, was an ecological activist and filmmaker who devoted his short life to stopping the extinction of sharks. It's too large a task for any one person—or any group of people; as we see in his films, he had help—but he did as much as he could to push back against the idea that sharks are nothing more than frightening sea monsters whose extermination is a public service. As he said in his first documentary, 2006's "Sharkwater"—and as he repeated in personal appearances and in this second and sadly final film—sharks are an integral part of the ecosystem, the top of the aquatic food chain, and their mass hunting (approximately 150 million deaths a year, by his count) will have long-term repercussions for humanity that we can't even imagine yet.

To make matters worse, Stewart says, most of the shark killings (or "harvestings," as the fishing industry prefers to put it, the better to eliminate the whiff of violence) has been undertaken for reasons of nonsensical greed. The first "Sharkwater" focused on the global traffic in shark fins, which are sliced from the bodies of caught sharks before the rest of the animal is thrown back in the ocean to bleed to death. The fins fetch a high price because shark fin soup is considered a delicacy with medicinal properties. That shark fins have no such properties hasn't reduced the appeal of shark fins at all. An educational campaign has moved 190 countries to ban shark finning, but such laws can be reversed with a pen stroke. And unfortunately, in many countries there's a loophole that renders such laws largely ceremonial: it's only taking shark fins that's illegal, not selling them. So as long as fins are transported on a cargo vessel rather than a fishing boat, the sellers aren't violating the law.

"Sharkwater: Extinction" includes more footage of Stewart and his allies traveling the world in hopes of exposing the shark fin industry with video, often procured at risk to the activists' lives. (In one scene, the crew of a trawler off Los Angeles harbor catches Stewart and fellow divers filming dying sharks caught in a giant net and shoots at them.) But the movie takes other, equally chilling information into consideration as well, such as the use of ground up or liquefied shark in an array of products, from pet food to women's makeup, usually without the buyer's knowledge; and the dangerously high mercury content in shark meat, owning to the animals' status as apex predators who eat animals that eat other animals.

The film is so effective at generating outrage that one wishes it had taken a few steps back sometimes, to put more context around the offenses and crimes that it shows us. Although Stewart and his team do activist work in Los Angeles and off the coast of Florida, most of their efforts are focused on majority-nonwhite countries in Latin America, Asia, and Africa, where the fishing population tends to be working class or poor. Absent any meaningful attempt to address the optics of the confrontations in this movie (and its predecessor) it often feels as if we're watching crusading white people trying to stop nonwhite people from eking out a precarious living, in a global economy ruled by stateless corporations that don't care about anything but bigger profits for the already-wealthy.

There was probably a way to navigate this political and rhetorical minefield, but the "Sharkwater" movies barely acknowledge it. The closest we get in this movie is a moment where former Costa Rican president Luis Guillermo Solis Riviera tells Stewart that, while he agrees in the abstract that shark finning is wrong, fishermen have to make a living somehow, and that as long as the fins fetch a high price, they're going to be taken. Because Riviera's point-of-view has been coded as that of an antagonist, it feels like one of those moments in a thriller where the bad guy opens his mouth and you find, to your surprise, that you can see where he's coming from, even though there's no indication that the movie does. To a certain extent, every documentary about ecological activists has to deal with this issue, and some manage to address it more deftly than others ("Trophy" does an especially good job), but it's skirted here. The movie sometimes suffers from feeling more like a collection of scenes rather than a meticulously assembled argument. But, to be fair, the whole project seems so suffused in grief for Stewart that it's likely that rhetorical seamlessness was the last thing on the producers' minds.

Where the film excels is in its portrait of Stewart as a crusader who lives and breathes his cause. The first "Sharkwater" was released 13 years ago when Stewart was just 24, and made much more of the activist-star as a beautiful object, often posing him as if for a beefcake calendar. Any self-regard Stewart had later in life is largely invisible in the follow-up, which often depicts Stewart in action on land, arguing strategy, analyzing commercial products for evidence of shark meat, driving to docks where fins and shark carcasses are being loaded, unloaded or stored, and sneaking past security to capture the footage he needs to expose what's going on. His keen focus is sharklike. There are times when he seems to sense impending violence as one of his beloved hammerheads might sense motion tremors or smell prey.

The final section of the movie, which chronicles his final dive, is heartbreaking. Earlier in the movie, we hear a snippet of voice-over in which he insists that he knows the exact time and circumstances of his own death. It's a testament to the magic of editing that, when Stewart prepares to go in the water one last time, we wonder if his faint yet warm smile means he knows this is the end, or if he's always looks happy when he's about to go swimming with sharks. 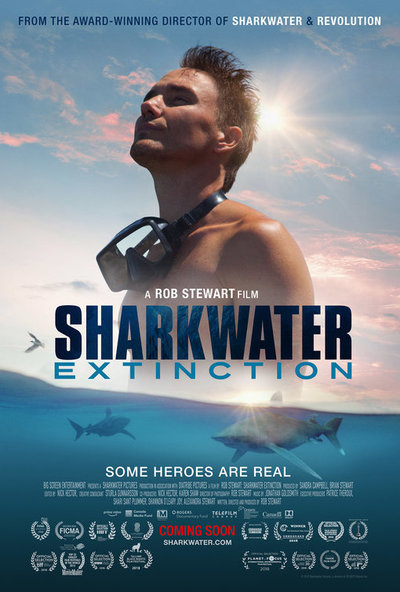 Rob Stewart as Himself

Paul Watson as Himself

Madison Stewart as Herself

Les Stroud as Himself

Boris Worm as Himself

Randall Arauz as Himself