The good news about “Sharknado 4: The 4th Awakens,” the latest in the frighteningly durable cable movie franchise that began in 2013 with the original “Sharknado” and continued with annual follow-ups, is that it's nowhere near the worst of the unnecessary sequels this summer—it certainly doesn’t betray audience goodwill like the shockingly lazy “Independence Day: Resurgence” did. But even the most dedicated of trash movie fans will find their patience tested with this third retelling of an initially mildly amusing joke, along with how "Sharknado 4" is just the same combo of demented plotting, dubious special effects and even more dubious guest appearances.

Set five years after the events of “Sharknado 3,” we learn in an opening crawl that, thanks to the nationwide installation of an “atmospheric stabilizing system” devised by billionaire brainiac Aston Reynolds (Tommy Davidson), sharknados are now a thing of the past. With that problem taken care of, Aston has decided to open Shark World, a gaudy theme hotel on the Vegas strip that runs on clean energy and contains dozens and dozens of sharks, because, why not? Shockingly, a sandstorm develops in the desert that somehow eludes the hi-tech systems and soon Las Vegas is overrun with poorly rendered CGI sharks. Luckily, long-running sharknado vanquisher Fin Shepard (Ian Ziering) just happens to be there with his heretofore unmentioned cousin Gemini (Masiela Lusha) to meet up with his son (Cody Linley) and manages to temporarily save the day. This is only the beginning, of course, and soon Fin and Co. find themselves traveling from Nevada to Niagara Falls in the hope of quelling the ever-growing storm.

If you recall “Sharknado 3: Oh Hell No!”—and God help you if that is the case—then you know that it ended on a cliffhanger regarding Fin’s wife, April (Tara Reid), and whether or not she would be killed by a falling piece of a spaceship. Although the film tries to be sly about it by not having her in the extended Vegas-set prologue, her presence is hardly a secret since she appears in the ads and has been doing interviews promoting it—more about the latter later. As for the details of how she managed to survive certain death, I will leave for you to discover on your own, except to note that A.) it has a lot to do with the machinations of her unknown mad scientist father and B.) said father is played by Gary Busey. I realize that most people might choose to mock Reid’s performance, but I cannot deny a certain affection for it. While most of the actors are playing to the ridiculousness of the situation, she tackles her role with a weird intensity that is oddly appealing. She actually comes across as though all of the madness might actually be plausible, a trick that I doubt that the likes of Jennifer Lawrence or Brie Larson could easily pull off.

As has been the case with the previous “Sharknado” sequels, the cast has been jam-packed with a number of mid-level (at best) celebrities, who hope that making an appearance here will lend them some hip status. While I am sure that I missed several cameos along the way—there are evidently stars of wrestling, YouTube and reality television, areas of entertainment where my knowledge is minimal at best—you can see the likes of Cheryl Tiegs, David Hasselhoff and several Hasselh-offspring, former “Baywatch” co-stars Alexandra Paul and Gena Lee Nolin, Wayne Newton, Al Roker (one of several NBC/Universal plugs on display), Carrot Top, Steve Guttenberg, Gilbert Gottfried, Vince Neil, Lloyd Kaufman and the legendary Adrian Zmed. At one point, Paul Shaffer shows up as a street musician, and while I won’t spoil what happens to him, I will say that in terms of raw dramatic power, the scene rivals his former TV boss’ turn in the immortal “Cabin Boy.” There is also an appearance by clueless Stacey Dash—sorry, I mean Stacey “Clueless” Dash—as none other than the mayor of Chicago. As someone who works in that greatest of cities, I began to wonder what the mayor could have done to deserve being played by the likes of her. Then I remembered. Well played, SyFy.

Perhaps realizing that they had already taken their one-joke premise to the breaking point, returning screenwriter Thunder Levin and director Anthony C. Ferrante attempt to beef up the narrative with two running jokes. In one, the various sharknados acquire some new, bizarre elements which leads to people under attack by bouldernados, oilnados, firenados, lightningnados, lavanados and, perhaps inevitably, cownados. In the other, countless references to other and generally better movies are shoehorned into the proceedings. As you might surmise from the title, there are a lot of “Star Wars” jokes on display but there are also references to the likes of “Titanic,” “Star Trek,” “Ghostbusters,” “The Wizard of Oz,” “The Texas Chain Saw Massacre” (with an emphasis on the underrated 1986 sequel), “Apocalypse Now,” a Stephen King classic that must go unnamed and, oddly enough, “Network.” Some may find these references and in-jokes to be irritating; others may want to compete with their friends to see who can make the longest list of them. All I'm saying is that I am adding an extra half-star to the rating just for the “Buckaroo Banzai” reference.

A critical evaluation of “Sharknado 4: The 4th Awakens” is absolutely pointless—while fans of the series may get something out of the sequel, there's nothing on display that could possibly sway naysayers or those whose have avoid the series so far. To all, "Sharknado 4" will be forgotten in a month or so. Frankly, the most memorable thing about it is the recent dust-up that occurred when Reid did an interview with Jenny McCarthy on the latter’s satellite radio show; it quickly devolved into a mutual insult fest. Now, while this ranks far lower on the celebrity feud scale than, say, Taylor Swift vs. Kim Kardashian (Team Swift all the way) or Taylor Swift vs. Katy Perry (which I would like to offer my services as a mediator), I am convinced that there is only one way to settle this particular contretemps—cast McCarthy in the inevitable (and not-so-subtly promised) “Sharknado 5” and let the sparks fly. Besides, it should give McCarthy’s career just the shot in the arm it needs. 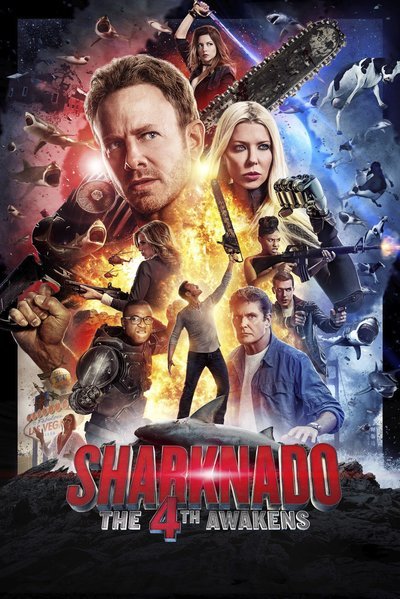