The Ukrainian film “Shadows of Forgotten Ancestors” won almost every, award in sight on the 1964 film festival circuit. But it’s become even more important in recent years, as a reminder not only of a talented director - Sergei Parajanov - but also of the restrictive Soviet approach to the arts.

After making a film that won awards in London, New York, San Francisco, Mar del Plata and Montreal, you see, Parajanov didn’t go on to become one of Russia’s leading directors. He went on to become a political prisoner, charged with the usual things Soviet dissidents are sent away for. He’s in the fourth year of a five-year sentence, which he more or less brought upon himself with a fiery address to an artists conference at which he called for an end to socialist realism and the beginning of more subjective, personal Soviet films.

“Shadows of Forgotten Ancestors” could stand as an example of the sort of film he was calling for. It’s one of the most unusual films I’ve seen, a barrage of images, music and noises, shot with such an active camera we almost need seatbelts.

In the Soviet Union, nationalism and regional identities are still highly charged forces. And Parajanov’s film is overtly regional: He celebrates the births, marriages, deaths and folk customs of the people of the Carpathians. Their holidays and festivals seem filled with the energy of countless Zorbas, but then there are the long days of labor, and Parajanov follows them through long winters, storm-swept springs and blistering summers.

His story follows the life and death of Ivan, whose childhood sweetheart slips from a mountain trail and drowns in the river below. Ivan grows morose and secretive, but finally does settle down and marry a strikingly beautiful woman. Even then he’s not happy: They can’t have children, and in their superstition they consult witches and the supernatural. Ivan himself becomes obsessed with the notion that his first sweetheart will be miraculously restored to him, and there is a tense scene while he’s praying with his wife and adds the words “…and the drowned” after the prayer for the dead.

Parajanov’s visual style is sometimes bursting with life, sometimes merely overwrought. A point-of-view shot, for example, has the camera swooping straight down as a tree falls on young Ivan’s father. Other shots zoom in and out of forests and barnyards and celebrations, and during violent scenes he sometimes interrupts shots with freeze frames and tints his film; during a death scene, blood-drenched horses leap across the screen. A few of these pyrotechnics can go a long way, and there were times in “Shadows of Forgotten Ancestors” when I thought they went too far.

But Parajanov has a genuine gift. He has the kind of heedless energy you glimpse in some of the early work of Martin Scorsese, pounding camerawork so filled with itself it can hardly contain the story. And for anyone who’s interested in the Ukrainian culture and customs of perhaps a century ago, “Shadows of Forgotten Ancestors” is a treasure, a repository of costumes, masks, superstitions and beliefs, courtship customs and the sufferings of short lives with too much work in them. 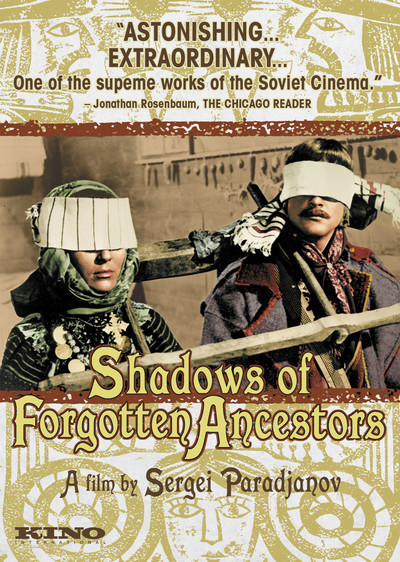