Roseanne Liang's “Shadow in the Cloud” is the type of genre movie that makes many of its bizarre choices just for the sake of seeing if it can all work. But whether you find the film to be ambitious, or just some stunt screenwriting, it's intriguing to watch an audacious filmmaker try to keep midnight-ready movies unpredictable, even if that means a sincere but silly mash-up of WWII dogfights, gremlin chaos, and feminism in action such as this.

Before the parade of production company logos is even done, “Shadow in the Cloud” begins with a great mystery—why am I watching a WWII-era cartoon PSA about gremlins? Consider that Chekhov’s gremlin infomercial, accompanied by the next shots of the movie that show a revolver being packed away, and a suitcase with a sound hole being carried off. The year is 1943, and a woman named Maude Garrett walks on a foggy tarmac looking for an Allied war plane called “The Fool’s Errand,” before we get to see her face and her hear voice. It’s a stoic Chloë Grace Moretz, with a British accent, and on assignment from a top secret mission. The men act like dogs as soon as they realize they have a "dame" onboard—most of them scramble to objectify her on the radio—and she is designated to sit in the bottom turret, with the guys riding above. The synth score by Mahuia Bridgman-Cooper sets the pulse from the very beginning, signaling that you should strap in for a movie of modern genre tastes, and not so much an accurate period piece.

From here, “Shadow in the Cloud” slowly builds, at first like a theater piece about a woman surrounded by harassment, removed from the possibility of being able to physically stand up to them. Along with their crude comments, the men on board question her credibility and mission, though one voice from a guy named Quaid (Taylor John Smith) stands up for her against the others. This first act mostly depicts Moretz inside the turret, and it’s with credit to her performance but also the film’s depiction of the claustrophobic space that the passage doesn’t feel inert; sometimes, you even have to remind yourself that you haven't been seeing the men as much as you think. Though Liang cheats in a couple of instances to show what’s going on above (with stagey, dream-like imagery of red and green light), it’s a strong case of the scenario and precise dialogue letting our imagination fill in the blanks, and making us fitfully disgusted.

Garrett is in for the ride of her life in “Shadow in the Cloud,” especially when gremlins start to beat up the plane, trying to get inside her turret. The men above think she’s delusional. She fires the gun that she brought on board, and that makes the men even more afraid of the woman in their flying boys club. As they press for information, we come to learn more about what's in the box, and what she's been lying about. But “Shadow in the Cloud” has more chaos to get to, and soon enough Liang’s camera is dangling outside the plane, and so is Garrett. Meanwhile it's the men who are hopelessly useless, unorganized, and primed to catch a bullet in the gut.

It wouldn’t be a stretch to say that this script (from Liang and co-writer Max Landis) is essentially a collection of storytelling gears, and it also wouldn’t be a stretch to point out how much this script does not conceal its awkward shape. From the beginning when Moretz is trapped in the turret, having to fend off objectification and fighting to be taken seriously, the script is mostly concerned with making sure you can relate to her experience, and that you care about the mysteries that are and are not methodically revealed. So if it’s not the sexism that gets you, it’s the impending threat of Japanese enemy fighter planes, or the snarling creatures that look like skinless, winged cats ripping up the plane as if it were a nice couch. These three obstacles that Garrett faces don’t entirely fit together, but the film is more amusing if you just accept them all.

As for why there are gremlins in this version of WWII—their scientific existence is never explained, but the opening cartoon posits them as a scapegoat for incompetent men. This proves to be a big part of the film's dominating heart for women like Garrett who serve, who put themselves in situations that are inherently contaminated by toxic machismo. And if it's going to be such an over-the-top tribute to real-life Garretts (replete with archival footage of WWII service women in the credits), it might as well show her kicking the ass of the very real and also the fantastical. From the very beginning, Garrett displays a certain confidence during the mid-flight crisis, scared as she might be, in part because of the 200+ hours she has logged flying unarmed planes in enemy territory. Moretz's performance takes Garrett through the whole physical and emotional spectrum of a woman whose endless adrenaline comes from being too bold for this shit, showing a dedication and courage that's unquestionably more capable than her male peers.

There are numerous moments in which the plotting of this lean thriller could be too simple, or too ridiculous, but the movie avoids such traps by maintaining focus and its you-are-there pacing. And because Liang is such a crafty director with small and large set pieces, while working with an incredibly game Moretz, the film’s most memorable sequences achieve the gratuitous fun they clearly desire. Especially when the movie goes into overdrive in the third act, throwing in some left-field music cues and throwing out the laws of physics with a big wink, "Shadow in the Cloud" keeps flying strictly because of who is in control.

In select theaters and on VOD and digital platforms on January 1. 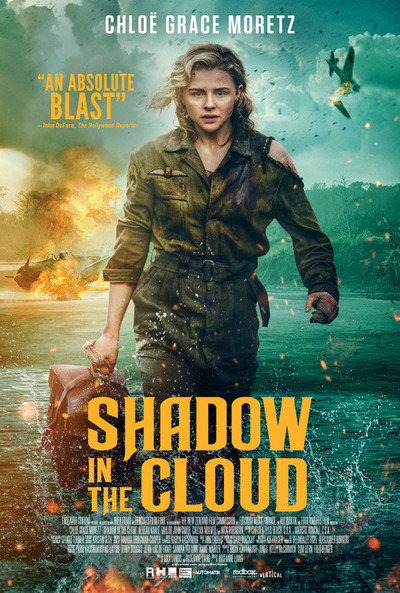