"Shadow Dancer," about an IRA partisan recruited as an informant by MI5, creates a powerful mood of unease and sustains it for an hour and forty minutes. There are scattered moments of intense beauty throughout, thanks to Rob Hardy's widescreen photography, which tends to view people from either very far away or very close up, making you think about them as individuals and then as specks in a social panorama.

And yet for all its beauty and intelligence, the movie is unsatisfying. Why? The story of, essentially a civil "Cold War" between Irish and British forces is so innately powerful that we should feel for the characters a great deal more than we do.

The movie's style may be the problem. "Shadow Dancer" is so hushed, respectful and distant that it never lets us get inside the characters' minds and hearts, and see them as anything more than the occupants of a set of situations—as people that things happen to, as opposed to living, breathing, unforgettable characters. ("Ominously subdued and grimly taciturn," The New York Times called it.) Certain moments are lingered over for quite a long time without disclosing any useful facts or feelings. By the time you get to the end of the story and realize how many important events were properly explained, and how many characters weren't developed beyond their plot function — including the heroine, IRA conspirator Collette McVeigh (Andrea Riseborough) — the movie's priorities seem slightly out-of-whack.

The first twenty minutes are the strongest. The film starts with a childhood flashback to 1973 Belfast, laying out the trauma that drove Collette to violence against the occupying British. This is followed by a long, daringly controlled sequence that shows the now-adult Collette planting a bomb in the London subway, then escaping on foot through tunnels to the surface, where she's promptly arrested by cops and delivered to the man who will become her handler, Clive Owen's Mac.

The opening subway sequence is effective partly because the character is a question mark, and both the lead actress and her director, documentarian James Marsh of the masterpiece "Man on Wire", try to keep her that way. Marsh often films her from the back, from a great distance, or in three-quarters profile, so that we can see just a sliver of her face. When we do see her face, it's a mask. We know nothing about Collette at this point except that she's anxious and still carrying around a metric ton of pain from what happened in the prologue, and we don't figure out precisely what she's up to until we see her her drop her purse on a stairwell. The adult Collette doesn't speak until twenty minutes into the picture. Her first words are, "A lawyer. I want a lawyer."

So far, so good: unfortunately, the same blankness that makes Collette so fascinating early on becomes a liability as we get deeper into the story, and watch her return to Belfast and interact with her ma (Brid Brennan) and her brothers Connor (Dornhall Gleason) and Gerry (Aidan Gillen), both of whom are active in the IRA. That Collette is hiding something—her agreement to become an informer so that she won't end in jail, with her son being raised by the state—explains why the character would be unreadable in scenes where she's being confronted with allegations that she's acting in a suspicious or untrustworthy way; but it doesn't explain why she's unreadable when we're just watching her think. In a straightforward historical drama, which is what "Shadow Dancer" is, the lead character should be emotionally comprehensible to us most of the time, even when she's deceiving other characters onscreen; otherwise there's no way for audience to connect with her, and the film becomes an exercise.

Clive Owen is more comprehensible and affecting as Mac, a character defined by his determination to protect Collette even as he exploits her connections. Mac's story runs parallel to Collette's. He's struggling against the militant elements in law enforcement who want to act immediately on his informant's tips and make a big show of retribution/punishment, rather than playing out a long game that could do the IRA more damage over time. Here, too, though, "Shadow Dancer" seems content to let Mac's situation define him, rather than reveal new layers of his personality as we watch him struggle. He's the good cop battling aloof, manipulative and secretive colleagues to protect his charge, and not much more than that.

That Mac, like everyone else in "Shadow Dancer," is based on a real person unfortunately doesn't blunt the feeling that we've seen this guy before, in cop flicks that were less tasteful and thoughtful but more lively and involving. We've also seen the other characters before, in both IRA dramas and more generic undercover-cop potboilers, and the movie doesn't do much to make them pop. There's the prideful, angry brother whose first instinct is always to fight; the younger brother who doesn't seem to have any opinions of his own, but is just doing what he's expected to do; and the chief of the local IRA cell who thinks he's got Collette pegged, then isn't so sure. Gillian Anderson, so indelibly sinister and elegant on NBC's "Hannibal" and so driven and troubled in NetFlix's "The Fall," is underused here as Mac's superior officer, a woman who has more secrets than she lets on. She's effective — all the film's actors are — but neither she nor the character make a lasting impression because the movie often seems more interested in photographing her than understanding her.

There are a few standout scenes in "Shadow Dancer," including a tense moment in which an IRA associate goes through a house in search of Collette while she's making a hushed, fearful phone call to Mac, and a funeral standoff between British riot police and IRA members that drives home how much of war is fueled by macho pride and grudge-holding. (The latter scene ends with a cutaway to a group of women standing against a wall, watching the confrontation from afar; their resigned expressions say more than damning dialogue could.) And many scenes contain vivid journalistic details, such as the way bomb-squad officers use poles with mirrors at the ends to scan the the underside of every car that comes into the heavily-barricaded precinct house.

At its best, "Shadow Dancer" evokes a bit of the moral exhaustion that Ken Loach captured in 2006's superior "The Wind that Shakes the Barley," an IRA drama set, sadly enough, seventy years prior: a sense that no matter how furiously angry the people on both sides are, any philosophical justifications were long ago reduced to excuses. They're ultimately going through the motions—doing what's expected of them, out of tribal loyalty and a fear of being thought dishonorable or weak.

Unfortunately the film's finer qualities are eclipsed by a kind of gossamer numbness. When the final, brutal double-whammy twist arrives, Collette and the other characters are still question marks. Their opaqueness seems less a statement on what sorts of people they are, or what kind of story this is, than a byproduct of "Shadow Dancer" focusing its considerable technical and artistic power on the wrong things. 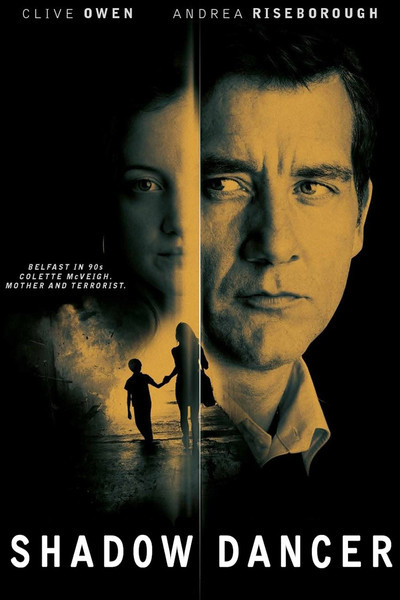