“S.F.W." is the kind of movie to inspire members of Generation X to lie about their age. It qualifies Forrest Gump for a genius grant. It is a portrait of the most singularly stupid, obnoxious character I've seen on the screen in many a day - which would be promising, if he were not boring, as well.

The movie stars Stephen Dorff as Cliff Spab, who gets his 15 minutes of fame when he is one of several hostages held inside a convenience store by mysterious terrorists. The hostage ordeal is telecast nonstop from security cameras inside the store, and Cliff soon becomes a global celebrity because of his nihilistic pronouncements and his debates with the terrorists and fellow hostages. His basic philosophy, expressed in the movie's title, is "so (bleeping) what?" That's about as deep as it gets.

The hostage ordeal arrives at a crisis point on Day 36, when the store runs out of beer. Shortly thereafter, Cliff Spab finds himself free and back on the street, the adored hero of millions, his photo on T-shirts. Unfortunately, his parents are slow to applaud his heroism, and want him to clean up his room. He responds by trashing his private refrigerator, filled with beer, and going on a rampage before stalking out of the house.

The media hang on Cliff's every word. "Everybody wanted a piece of me," he complains in the narration. "Trouble was, there wasn't enough of me to go around." That would have been true even if they had only wanted an itsy bitsy piece, since there is very little of Cliff to begin with. He is culturally deprived, has a low I.Q., is narcissistic and alcoholic, and has one of those vocabularies in which the most popular four-letter word is used as an all-purpose substitute for thousands of other words unknown to the speaker.

Basically, Cliff's pose is that he wants to be famous for not wanting to be famous. He is a reluctant celebrity, cheered for his reluctance. This pose reaches its absurdist climax when Cliff stars at a rock concert. His act is rather simple. The orchestra plays "Thus Spake Zarathustra" while Cliff walks onstage and stands there, projecting reluctance to be made into a celebrity, and the audience cheers wildly.

The sayings of Cliff Spab will not soon be anthologized in those books of great movie lines. "If you think about it enough, you can go nuts," he opines at one point. At another, asked, "What are you rebelling against," he rips off Marlon Brando's famous response to the same question, "What have you got?" This must I think be counted as an original line of Cliff's, since the movie gives no evidence that he has ever heard of Marlon Brando, or anyone else.

In fairness to Jefery Levy, the director and cowriter, the film is intended as a satirical attack on the cult of celebrity, and it uses unconvincing lookalikes for such notables as Phil Donahue and Sam Donaldson in scenes where TV takes Cliff Spab seriously. One problem may be that Cliff Spab is seen at such great length that we grow very tired of him. His celebrity is no stranger, I suppose, than the attention given to other marginal personalities as Kato Kaelin and John Wayne Bobbitt, but then again we have not been made to listen to Kato or John W. around the clock for more than a month. It only seems as if we have. 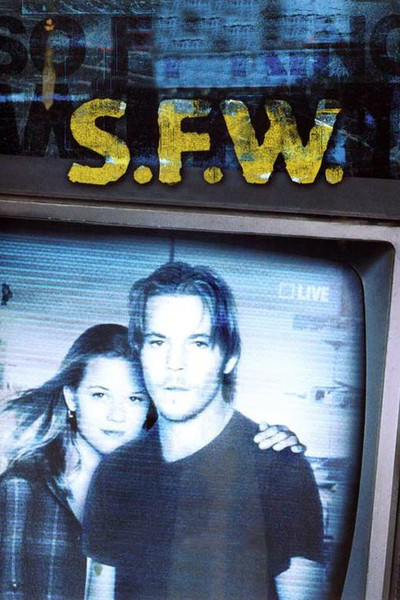