“Hope for the best, expect the worst.” Mel Brooks popularized that adage in a funny song he co-wrote for one of his most amusing films, the relatively obscure 1970 “The Twelve Chairs.” It’s a useful sentiment in general, but, for the film reviewer, something that applies most particularly in the first two months of the new year, which, at least as far as studio product is concerned, represent a dumping ground for problematic product or just plain unmarketable dreck.

Given the fact that its U.S. release date was moved not once, but twice, and that it now finds itself occupying a date in the aforementioned dumping ground, one might expect the Sergei-Bodrov-directed “Seventh Son,” a medieval fantasy tale with a strong Young Adult stress in its plotting (not surprising, as it’s based on a YA book, the first of three so far featuring the same characters, as is the thing these days) to be pretty bad. But, surprise! One doesn’t want to damn the movie with faint praise by saying “it’s not that bad,” but that’s kind of the most objectively accurate description of it, in all honesty. Subjectively, though? This critic, who’s an unabashed fan of the myth-mash-up monster movies of the ‘50s and ‘60s that featured a plethora of stop-motion-animated monsters and such, found himself rather enjoying more than a few portions of the movie, which indeed features a plethora of computer-animated monsters that at least seem to have been inspired by the work of such old-school tech masters as Ray Harryhausen.

Another attraction is that the adult leads of the picture are Jeff Bridges and Julianne Moore. Bridges plays a righteous witch-hunting “spook” (he’s also a Knight of some secret sacred order or another) while Moore plays a near-omnipotent witch who’s going to use the once-in-a-hundred-years “night of the blood moon” to make herself 100% omnipotent. Of course these two characters have a romantic back-story. Of course they do. Since every other film critic writing about this movie is going to make some kind of “I didn’t think the sequel to ‘Big Lebowski’ would be THIS weird” joke, I’ll spare you my effort. It is, however, a pleasure to see The Dude and Maude in a clinch once more, even if Bridges’ mumble-mouthed, grizzled hero is more like his “True Grit” Rooster Coburn crossed with Richard Harris in “Camelot,” had Richard Harris been 70 in “Camelot.” In other words, it’s a truly eccentric performance, and why not. As for Moore, she looks gorgeous and slithers with enough menace that you can almost convince yourself that her dragon-morph isn't a special effect.

The YA aspect is provided by the spook’s new apprentice, the titular seventh son Tom Ward (Ben Barnes), who, of course, falls for a teen witch (half-witch, more accurately; the condition of half-witchdom plays a crucial albeit entirely predictable part in the plot) who’s the daughter of Moore’s right-hand witch. The standard complications ensue, but they’re pretty easy to gloss over if you just wanna get off on the fellas battling man-bears and multi-armed swordsman and a bald-pated guy who can make ax-blades out of his hands when he’s NOT being a dragon. At such points, and particularly during a cliff-diving-and-waterfall scene in which Tom goes up against a very stubborn giant, “Seventh Son” builds up the goofy charm of an old-school Saturday afternoon matinee. The tech credits, as they call them in the trades, tell you why: the effects were designed by original “Star Wars” guy John Dykstra, and the sumptuous art direction is by Dante Ferretti, who’s worked magic for the likes of Fellini, De Palma, and Scorsese. Olivia Williams and Djimon Hounsou are welcome components in the supporting cast, and the whole thing is over and done with in a good deal less than two hours. A towering cinematic achievement? Hardly. But not entirely unsatisfying if this particular genre itch needs some scratching. 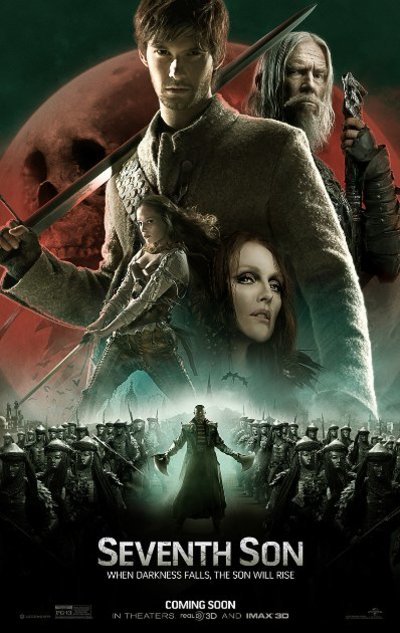