If Mike Royko is correct and California is our national lunatic preserve, then Marin County is the transitional institution where residents gradually ease themselves back into the mainstream with maintenance dosages of granola, yogurt, cocaine, television, hot tubs, sex, being OK, and telling you you're OK, too. I talked today to an old friend from Chicago named Sandra Singer who has moved to Marin, and she summed up the difference between the two places very simply: "You don't have to get up real early in the morning to deal with these folks. Everybody out here is debating whether the movie is accurate or not." That anyone could argue whether "Serial" is accurate is mind-boggling.

Marin is across the bay from San Francisco, and, if "Serial" is to be believed, is inhabited by a race of upper-middle-class zombies mesmerized by the social trends of the moment. Hey, man, they're really into being into things. "Serial" first appeared as a California best seller by Cyra McFadden, who satirized life in Marin as if it were a continuing soap opera. To the degree that the satire failed, it was because life in Marin is a continuing soap opera.

And now we have the movie. It is not a very good movie; it's one of those comedies where the occasional genuine laughter is punctuated by long periods of silence. But it's faithful to the book, more or less. It shows us an alien life form with a superficial resemblance to the human being.

These creatures ride bicycles to the ferry to conserve fuel. They are all going to the shrink. They trade spouses. Their kids join obscure religious cults. Their hearts are filled with love, their minds with dread, their bowels with bran. Their marriages and memorial services are holdovers from the days of the flower children, with incantations about the earth and the sky and doing your own thing.

People in Marin keep their entertainment options open: An executive headhunter by day is likely to be the head of a gay motorcycle gang by night. The weather in Marin is always just great.

The movie puts its cast through its paces as if this were a suburban "MASH." There's a complicated plot, lots of characters, and a story structure that cuts back and forth, for example, between an outdoor renewal of marriage vows and a bike gang raid on a cult headquarters. It's as if all of Marin is fueled by the same life force, which simply manifests itself in various trends.

Some of the movie's lines of dialogue are very funny (and most of the funny ones cannot be quoted here). Some of the characters are well-drawn, especially Peter Bonerz as a cocaine-sniffing psychiatrist who solemnly informs a 10-year-old he needs to get in touch with his childhood. The dialogue is jammed with code words, catch phrases and fashionable pseudo-psychological jargon: everybody in the movie seems to have learned the language out of the back issues of Mother Earth News and Psychology Today.

But for all of that, "Serial" just isn't very good. I think maybe that's because the characters are seen almost exclusively as caricatures. Nobody in this movie are real enough for us to identify with; they're seen as such completely robotized victims of the Me Decade that they don't have enough freedom of choice to make their behavior meaningful - or funny. They stand in sharp contrast, that is, to the sturdy individualists, brilliant eccentrics and clear thinking citizenry of our own Chicago suburbs. 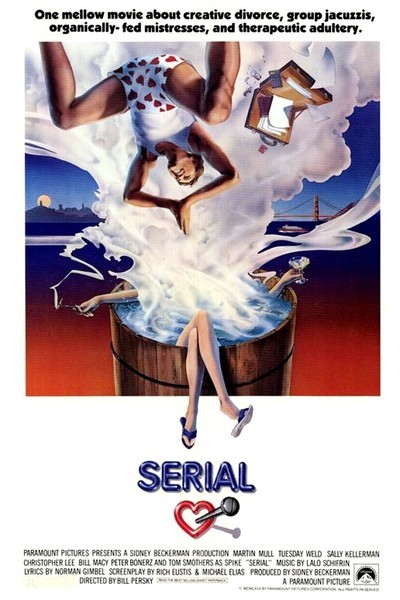