“Serenity” is terrible and insane, and will surely end up being one of the worst films of 2019. But it’s also such a wildly ambitious roller coaster ride that it must be experienced, preferably with friends, to laugh together at its cheesy dialogue, over-the-top performances and multiple, major plot twists.

Writer/director Steven Knight, whose 2014 Tom Hardy drama “Locke” is a compact marvel of precision and suspense, once again tries to dazzle us with narrative daring. But what ends up happening is that he partially pulls the rug out from underneath us about halfway through, then yanks the whole thing out by the end, then waves the rug around in the air as if to joyfully shout: “Ha! This is the rug you were standing on! See? It’s not underneath you anymore!” Giant twists like the ones that ultimately come to define “Serenity” often can be thrilling, and can provide some enjoyment in trying to go back in your mind and search for clues. What Knight does as his game becomes clearer, however, only raises more questions than he answers – and some of those questions are downright icky.

It all starts out as a seemingly straightforward neo-noir, full of damaged characters and desperate circumstances. Matthew McConaughey chews up the sunny scenery as the improbably named Baker Dill, a chain-smoking, rum-swilling Iraq war veteran who spends his days as the captain of a fishing boat for hire on the idyllic, tropical island of Plymouth. Dill is obsessed with an elusive, behemoth tuna he’s nicknamed Justice (in a not-so-subtle bit of symbolism), a quest so famous, it’s a constant source of conversation wherever he goes. Djimon Hounsou is his dutiful and pious first mate, Duke, a black character who’s such a pure voice of reason and so willing to sacrifice his own well being for Dill’s greater good that he borders on magical.

One day, a chic blonde from Dill’s past comes sauntering through the door of the island’s only bar: Anne Hathaway’s Karen, his ex and the mother of the couple’s teenage son, from whom Dill has become estranged. Karen is now miserably married to the man she left Dill for: Jason Clarke’s Frank Zariakas, a monstrous man of shadowy wealth who abuses her verbally and physically. As film noir femme fatales tend to do, Karen has tracked Dill down to offer him an unsavory proposition: Take Frank out on the boat, pretend it’s a fishing trip, ply him with alcohol and push him overboard to let the sharks devour him. If he does it, she’ll pay him $10 million.

Now, at this point (or even long beforehand) you’re probably wondering to yourself: Is Knight serious? What was he thinking making a movie that’s smothered in a pulpy tone and brimming with clichéd types? It’s all so arch: Does he mean it, or is this some sort of parody? We haven’t even gotten to Diane Lane’s character, the beautiful older woman who lies about her bungalow all day in silky robes, looking through the slats in the shutters, waiting for Dill to stop by so she can pay him for a roll in the hay (with some truly cringeworthy post-coital repartee). She literally leaves this room once – and that’s to go to Dill’s house. The film’s treatment of its female characters is not exactly woke.

Watching “Serenity” reminded me a bit of the way I felt while watching “Tully” – which is a way better film on every level, for the record. But similarly, it made me wonder: Did Diablo Cody mean to write a manic pixie dream girl character with this perky nanny? Certainly she knows better than that. Or is some other hidden undercurrent at work here? With “Tully,” there was indeed a twist that changed everything we’d seen, but it was clever and ultimately poignant. We can’t say the same for “Serenity.” And that’s about all we should say about that.

Similar to “Collateral Beauty” and “The Book of Henry” – recent dramas with esteemed casts that went off the rails in enjoyably awful ways – “Serenity” is the kind of bonkers movie that truly must be seen to be believed, if not for its misguided storytelling aspirations then at least for its preponderance of naked McConaughey. (Dill has a propensity for diving nude off the cliff in front of his ramshackle home and calling it a shower. He also shouts at the sky a lot, which is fun.) As for Knight, “Serenity” remains his Big Symbolic Tuna – a wily beast of mythical proportions that remains tantalizingly out of reach. 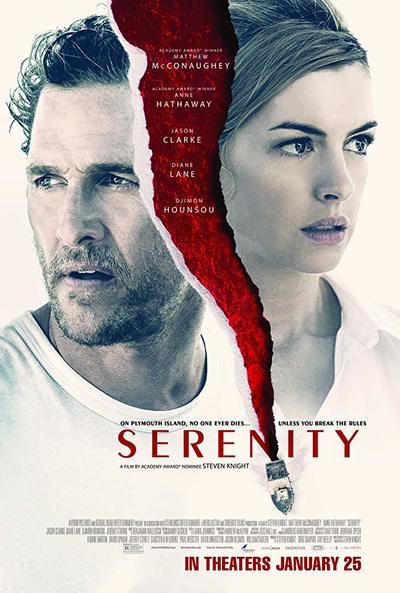 Rated R for language throughout, sexual content, and some bloody images.