The group of friends in "Semper Fi," a new feature film from Henry Alex Rubin, the Oscar-nominated director of “Murderball," live in a small town in New York State, up near the Canadian border. Most have what would be called blue-collar jobs, operating machinery on the docks, short order cooks. One weekend a month they travel to Fort Drum for training. They're all in the Marine Corps Reserves, and the reserves are being called up for combat duty. "Semper Fi" is best when it sticks with the journeys of the individual characters, each with their own backstory and struggles. These men have always known each other. But something goes wrong along the way, and "Semper Fi" suddenly decides it wants to be another kind of movie. The transition doesn't work.

Cal (Jai Courtney) is a cop, and the legal guardian of his younger brother, a reckless hothead nicknamed Oyster (Nat Wolff). Oyster has racked up a couple of felonies, and Cal had to pull strings at the Reserves to get him a felony waver. Their relationship is that of a Stern Dad and his Rebel Son. There's a lot of tension in the relationship. The rest of the guys, all known by nicknames, are sketched in: Jaeger (Finn Wittrock) is a ladies' man, stinking up the car with his cologne ("It's called Transcendence," he informs his buddies, who razz him mercilessly). Jaeger can't let go of his ex-girlfriend, Clara (an underused Leighton Meister). She's moved on. He hasn't. Milk (Beau Knapp) is the most "adult" in the group. He's married, with a child. They spend their time getting drunk, racing each other home, calling each other "bro." Their bond is the bond of "Semper Fidelis," the motto of the United States Marine Corps. "Always loyal." (Last year, Rubin directed a rousing national commercial for the Marine Corps.) War looms, and the guys have a lot of steam to let off. After Oyster accidentally kills someone in a bar fight, he's given a 25-year sentence. The rest of them are shipped off to Iraq.

The action moves back and forth between Iraq and Oyster's experience in incarceration. The guards pick him out for sadistic treatment. Cal is convinced Oyster is going to be killed in prison, so when he returns from Iraq, he decides to bust Oyster out, using his training as a police officer and a Marine. This is the shift in the movie. The prison break is elaborate, requiring all hands on deck. The war veterans will work the prison break like one of their training drills at Fort Drum, like one of their operations in Iraq. But improbabilities loom. What will happen to Oyster afterwards? Where will he go? Won't there be a manhunt for him? If this is what "loyalty" looks like, I still have some questions. Combat veterans using their skills in an inappropriate civil environment is an interesting topic, but it's mainly ignored in "Semper Fi." We're expected to be on their side throughout.

Rubin (and his cinematographer David Devlin) have a good eye for landscape, light, and mood, and they handle complex sequences—like the battles in Iraq—very well. This is a very male-driven film, which is not necessarily a problem, but it is a problem when a character like Clara is so thinly drawn you can't even keep her in your head when she's off-screen. She's anti-war, she's gotten out of her blue-collar environment, she's getting an education. Jaeger is threatened. There are all kinds of unexplored possibilities here!

I know I complain about "too much plot" a lot in my reviews. I'm not against plot, but I appreciate small observant movies and character-driven stories not ambitious to put across a message. If the film does its job well, the message will be implicit. The movie is a way to get to know a bunch of interesting characters, people you can invest in, if not "relate to." There's a lot of plot in "Ash is the Purest White," one of the year's best films, but at its heart, it's really a story about this one woman, and the film is galvanized by Zhao Tao's tremendous performance. Her transformation is extraordinary. "Semper Fi," on the other hand, gets bogged down in its plot. The interesting characters and all of their conflicts are all right there onscreen—the cast is excellent—but the "prison break" is such a far-fetched idea it's difficult to invest in it. The best parts of "Semper Fi" call to mind "The Outsiders" or "Diner" or "Breaking Away," wonderful male coming-of-age stories, all of which had storylines but didn't feel beholden to the machinations of plot. Hanging out with the characters was enough. 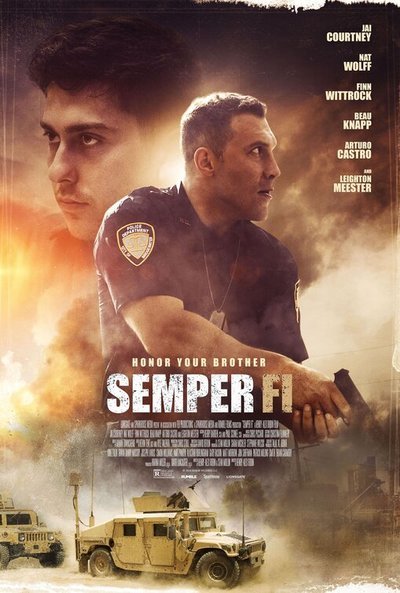 Rated R for pervasive language, some violence and disturbing images.