While a lot of sci-fi looks to the future, the best of the genre often reflects the fears and concerns of the present. Stefon Bristol’s “See You Yesterday,” produced by his NYU teacher Spike Lee, may have a time travel twist that echoes “Back to the Future” and “Avengers: Endgame,” but it weaves its high concept through a drama that reminds one of “Do the Right Thing” and last year’s “The Hate U Give.” It’s an ambitious, striking debut that takes unexpected creative risks and heralds the arrival of an exciting new filmmaker, one who was clearly inspired by the recent Oscar winner but also has his own voice. Actually, it heralds three arrivals, as star Eden Duncan-Smith gives one of the year's most engaging debut performances and a young man named Astro gives an early performance in what I suspect will be a lengthy career.

So much hinges on Duncan-Smith’s work here, a complex blend of urban drama and wide-eyed optimism. Very few filmmakers and performers can walk such a fine line that a piece feels both socially conscious and almost like a goofy adventure movie at the same time. And yet when “See You Yesterday” opens with a cameo from Marty McFly himself, you know it’s not your typical sci-fi adventure movie. However, it’s that balance within Duncan-Smith’s totally committed and charismatic performance that holds the entire film together.

She plays C.J., a brilliant teenage scientist in the New York neighborhood of Flatbush. Working with her classmate and BFF Sebastian (Dante Crichlow), C.J. is working on nothing short of time travel. The pair are starting slow, trying to be able to jump back just one day, make no major changes, and jump back. Yes, whatever the Hulk may think, “See You Yesterday” subscribes to the classically cinematic vision of time travel in which making even the smallest change to the past could entirely disrupt the future.

Disruption comes unexpectedly in C.J.’s life when her brother Calvin (Astro) is murdered by the police, who mistake his phone for a weapon. C.J. decides that she’s going to go back in time and save her brother’s life, but she keeps complicating the past every time she jumps with her buddy Sebastian. Interestingly, a similar theme was just explored on Jordan Peele’s “The Twilight Zone”—the idea that cycles of violence simply cannot be avoided, even with the ability to play with the very properties of time itself.

“See You Yesterday” isn’t quite as tight or focused as that “Twilight Zone” episode, but Bristol makes a number of smart decisions, including keeping it close to 80 minutes and bringing Flatbush to cinematic life. When I think of “See You Yesterday,” I think of the bright colors of the neighborhood, heavily influenced by Jamaican culture, and a movie that always feels like it’s in motion. Bristol has a vibrant eye, one clearly inspired by Lee’s early films in terms of visual composition and style. He’s also a promising director of actors, as evidenced by the work from his young cast.

As “See You Yesterday” becomes more cluttered with time travel loops, it becomes less interesting, and I’m not completely sold on the ending. The film is at its most powerful when at its simplest—the story of how someone could devise one of the most remarkable inventions in history but still be unable to fix the violence and racism in her community. As fun as the sci-fi is here, it’s that core of frustrated anger at a broken country that truly fuels everything that works in “See You Yesterday.” 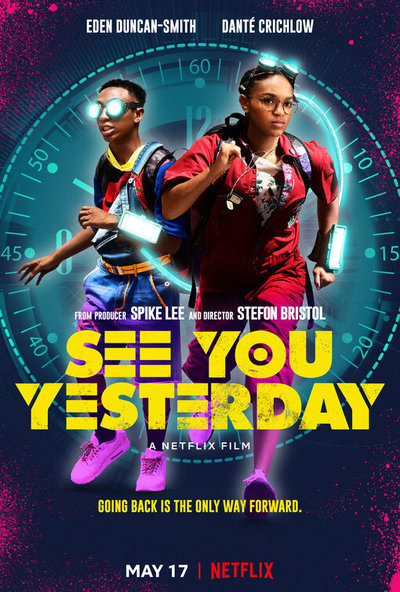