In the documentary “Searching for Mr. Rugoff,” filmmaker Ira Deutchman offers a compelling biographical portrait of a highly influential New York movie theater owner and independent film distributor that is, by extension, a study of the importance and complexities of creative film marketing. Yet in a broader sense, the film also delivers a fascinating and moving account of a crucial juncture in American film culture, the time in the late ‘60s and early ‘70s when film came to be regarded as an art by a broad swath of moviegoers, especially young ones.

Donald Rugoff was a pivotal player in that transformation, yet Deutchman, who worked for him, worries that today he is completely forgotten. Actually that is only partly true. For some of us who were among those young cinephiles back then, the names of Rugoff and his company Cinema 5 are remembered and still resonate. It’s the generations that came after who may need the history lesson that “Searching for Mr. Rugoff” so eloquently and entertainingly provides.

According to the numerous former associates and acquaintances Deutchman interviews, Rugoff was a character with a capital C, a brutal boss who commanded both terror and devotion, a consummate vulgarian who would wolf down deli sandwiches that left trails of mustard running down his shirts. Yet the great paradox he represented was that a man of such bad taste personally could have truly brilliant taste in movies and a nigh-unto-genius sense of how to connect them to audiences.

Of course, the art film had already established a firm beachhead with urban cinephiles in the ‘50s, the decade that brought to American shores the monochrome austerities of Bergman, Kurosawa and early Fellini. And the worldwide upsurge of brainy, idiosyncratic “new cinemas” launched by the French New Wave in the early ‘60s had resulted in college campuses bristling with adventurous film societies and brand-new courses in cinema appreciation.

All that meant that the art film was ready to “go big” (or at least bigger than it had been) when Rugoff began to make his mark, and the key to his success was a combination of instinctive curatorial intelligence and bold, innovative showmanship. Interestingly, there was another element to his skill set that wasn’t shared by other important art-film impresarios before or since: a feel for architecture and urban design that led him to create a set of modernist cinemas on New York’s Upper East Side—Cinema 1 and 2, the Sutton, the Beekman, the Plaza, the Paris—that served as temples of cinema’s new sensibility.

In a sense, Rugoff grasped that cinema’s turn in the late ‘60s was part of a movement that implied the medium had become part of a whole new cultural environment. And his tastes both reflected and shaped the interests of the emerging audiences who gravitated toward these spaces and the works they housed. Under his aegis, the art film became more diverse, more American and more youth-oriented. No longer did the most exciting films issue only from European eggheads. The new environment was broad enough to embrace the scabrous satire of Robert Downey’s “Putney Swope,” the transgressive heroin and sex mélange of Paul Morrissey’s “Trash,” and the Rolling Stones’ Altamont flameout captured in the Maysles Brothers’ and Charlotte Zwerin’s “Gimme Shelter.”

When it came to European auteurs, Rugoff had both a new generation of talents to unveil and new strategies to launch them. For Costa-Gavras’ high-octane political thriller “Z” he unleashed a publicity blitz that made it an artistic event and a news story and resulted in its being the first film nominated for both Best Picture and Best Foreign-Language Film. For Lina Wertmuller’s “Seven Beauties,” he organized a receiving line in which the director (virtually the only female auteur who received major critical acclaim in this era), star Giancarlo Giannini and others shook hands with every member of a large audience that had just watched the film.

For a time, Rugoff knew how to pick’em and how to ballyhoo’em. When he acquired “Monty Python and the Holy Grail” after every other distributor passed on it, he had his employees gambol through midtown Manhattan in medieval costumes, an event that some today recall with retrospective amazement, eye-rolling and grins. The film was a major hit.

Of course, like most such stories, this one has an arc that eventually points downward. Rugoff’s tastes did not prove infallible, and eventually resulted in a string of flops that hurt his company financially. Plus, by that time, the major studios had caught on to the shift in tastes his work announced and had launched the era of the “New Hollywood” by backing directors like Scorsese, Altman and Woody Allen.

But what finally put Rugoff under was a protracted business battle. Cinerama owner William R. Forman initiated a hostile takeover bid that kept Rugoff in the courts from 1974 until 1986, when he lost control of Cinema 5. Thereafter, he wanted to find a suitable job in the New York film business, but he’d made so many enemies no one would hire him. Unable to support himself in Manhattan, he retreated to Edgartown, on Martha’s Vineyard, where he ran a film society in an abandoned church and was supported by his second wife.

For Ira Deutchman—whose career has included work in film distribution, producing and running Columbia University’s film department—this story is clearly personal. In addition to taking the unusual step of including himself in the film’s interviews, he intercuts the biographical narrative with an account of a trip he makes to Martha’s Vineyard to learn about Rugoff’s final days and investigate that rumor that he’s buried in a pauper’s grave.

In the end, “Searching for Mr. Rugoff” is both dramatic and enlightening, a moving document of an American life that has a bit of “Citizen Kane” to it. With the help of editor Brian Gersten, Deutchman has turned out a beautifully structured tale of movie love that’s also a fine tribute to his maddening, mercurial, mustard-stained mentor. 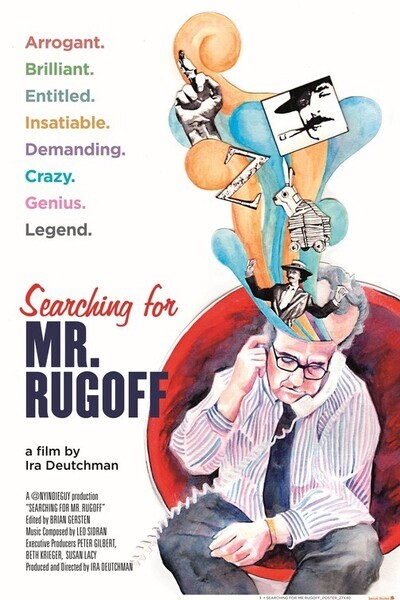 Robert Downey Sr. as Self