Scandalous: The True Story of the National Enquirer

Moviegoers who shell out money to see Mark Landsman’s nauseating new documentary, “Scandalous: The True Story of the National Enquirer,” should be granted barf bags free of charge as a necessary courtesy. It vividly evokes the pervasive disgust I felt as a kid while in the supermarket check-out line, looking at the eyes of child beauty queen JonBenét Ramsey as she stared back at me from the Enquirer cover, which she seemed to grace at least every other week. The vileness of her routine exploitation was twofold: not only was she a six-year-old murder victim dressed like a hyper-sexualized teenager, she was being further degraded by a profit-driven tabloid proudly lacking in the qualities of empathy and human decency.

As much as I love writing, the Enquirer made me realize that I would rather be unemployed than take part in their brand of legalized stalking, requiring them to circle ailing celebrities like vultures before feasting on their carcasses. It was, in fact, dead bodies that the tabloid’s creator Generoso Pope Jr. initially used to attract the eyeballs of consumers, hunting down the goriest sights from traffic accidents and splaying them on his front page without any regard to the trauma it would shower upon loved ones of the deceased. Only when grocery stores emerged as the Enquirer’s ideal market, thanks to the drifting attention of bored impulse buyers, did Pope Jr. replace the blood and guts with equally sensationalistic covers serving as the gossip-laden forebear to online click bait, with their seductive array of alternative facts.

Landsman’s film is enraging for all the right reasons, and more than a few wrong ones as well. It comes off as more of a puff piece than an exposé, with its gratingly upbeat score, comical editing and penchant for letting its round-up of former Enquirer employees off the hook, enabling them to paint far too flattering a picture of themselves. Their shady methods for invading the privacy of the rich and famous obviously came in handy during the O.J. Simpson trial with their publication of a picture showing the disgraced athlete in his incriminating Bruno Magli shoes, a key piece of evidence that led him to lose the civil case and cemented his guilt. Landsman portrays this breaking news item, pursued purely to sell copies, as an act of heroism on the level of the revealing Watergate interviews conducted by “60 Minutes” correspondent Mike Wallace, who was himself the subject of a documentary this year.

Yet whereas Avi Belkin’s “Mike Wallace Is Here” ranks among the best films of 2019, with its even-handed portrait of the man as both a truth-seeking journalist and an attention-craving dramatist, “Scandalous” is a disappointment in how it fails to challenge the self-serving claims of its subjects, especially when they reek of denial. Proving that he can’t take what he makes a living from dishing out, Enquirer editor Steve Coz cloaks himself in victimhood after receiving bad press following the death of Princess Diana. He insists that her fatal accident was merely a result of her driver’s inebriation, never taking into account the paparazzi who had been pursuing her vehicle nor the fact that his publication had popularized and empowered that precise form of dehumanizing ambush.

Pope Jr., who passed away in 1988, relished the opportunity to expound upon how the Enquirer allegedly aims to uplift its readers by illuminating the “good side” of life. Its method for doing this is to treat the wealthy with contempt, banking on the bitterness and envy fueling its readership as well as the anonymous sources close to stars whose reputations they are intent on destroying. Aspiring reporters wary of the tabloid’s reputation have gladly given up their integrity once they’ve learned that their salary will be tripled and they’ll get to travel to glamorous locales around the world, thanks to mafia money gifted to Pope Jr. by the godfather himself, Frank Costello. I suppose we’re meant to be inspired by the diverse writers who competed with their predominantly white male colleagues by publishing humiliating pictures of icons like Whitney Houston, turning her drug addiction into a public spectacle that undoubtedly aided in driving the singer to her grave.

A sequence chronicling the Enquirer’s bumbling efforts to secretly snap a picture of Elvis Presley’s corpse lying in a coffin is unforgivably played for laughs, though to its credit, the film does get serious when exposing the tabloid’s hypocrisy in applauding itself for speaking truth to power. When Jan King, Bob Hope’s longtime personal secretary, broke her silence about her well-liked boss’ casting couch operation, Pope Jr. swiftly killed the story, citing that America wouldn’t want to hear it. Bill Cosby was also able to silence an article about his affair with a Vegas showgirl after cutting a deal with Iain Calder, an Enquirer editor who milked his own celebrity by devouring dirt in Hoover vacuum ads.

Less lucky was Democratic candidate Gary Hart, whose chances at running against George Bush were crushed after the Enquirer published pictures of him partying with his mistress, thus inexorably altering the nation’s political future. Of course, no bulletin about infidelity could tarnish the reputation of Donald Trump, perhaps the Enquirer’s most powerful fan. He so admired the tabloid’s sleazy methods for maintaining popularity that he personally offered tips to stories under transparent aliases (we hear the future president identifying himself over the phone as “John Miller” after throwing his latest acquaintance under the bus).

How fitting that a tabloid funded by a mob boss and protection money would ultimately help elect a Commander In Chief whose thuggish language appears to have been modeled after Al Capone. The only real guffaw I had while watching this picture was in response to its oh-so-shocking revelation that Trump himself served as a “silent editor” to Enquirer articles praising him during the 2016 election, considering his voice came through loud and clear in every headline about “Lyin’ Ted” and “Crooked Hillary.” Landsman seems to buy his subjects’ argument that the publication took a nosedive after conservative mogul David Pecker became the new publisher, even though his conduct is no more rotten than that of Pope Jr. Both silenced #MeToo stories for the sake of personal bias while claiming that their propaganda was somehow noble. None of the writers interviewed here have the guts to own up to how their execrable legacy trigged the rise of a president who relies on his supporters ignoring the facts. If anything, “Scandalous” affirms how Trump is the embodiment of the Enquirer, in that he was dismissed as a joke until our collective waking nightmare became the punchline. 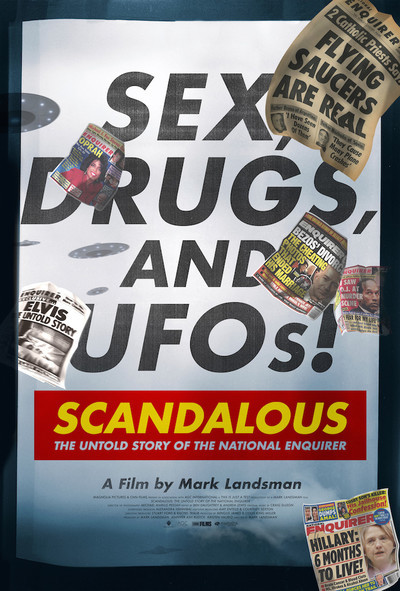 Scandalous: The True Story of the National Enquirer (2019)