"Saving Silverman" is so bad in so many different ways that perhaps you should see it, as an example of the lowest slopes of the bell-shaped curve. This is the kind of movie that gives even its defenders fits of desperation.

Consider my friend James Berardinelli, the best of the Web-based critics. No doubt 10 days of oxygen deprivation at the Sundance Film Festival helped inspire his three-star review, in which he reports optimistically, " `Saving Silverman' has its share of pratfalls and slapstick moments, but there's almost no flatulence." Here's a critical rule of thumb: You know you're in trouble when you're reduced to praising a movie for its absence of fart jokes, and have to add "almost." The movie is a male-bonding comedy in which three friends since grade school, now allegedly in their early 20s but looking in two cases suspiciously weathered for anyone under a hard-living 32, are threatened by a romance. Darren Silverman (Jason Biggs), Wayne Le Fessier (Steve Zahn) and J.D. McNugent (Jack Black) grew up together sharing a passion for the works of Neil Diamond; their sidewalk band, the Diamonds, performs his songs and then passes the hat.

The band is broken up, alas, when Darren is captured by Judith Snodgrass-Fessbeggler (Amanda Peet), a blond man-eater who immediately bans his friends and starts transforming him into a broken and tamed possession. "He's my puppet and I'm his puppet master!" she declares, proving that she is unfamiliar with the word mistress, which does not come as a surprise. In a movie so desperately in need of laughs, it's a mystery why the filmmakers didn't drag Ms. Snodgrass-Fessbeggler's parents onstage long enough to explain their decision to go with the hyphenated last name.

Wayne and J.D. concoct a desperate scheme to save Darren from marriage. They kidnap Judith, convince Darren she is dead and arrange for him to meet his first love, Sandy Perkus (Amanda Detmer), who is studying to be a nun. She hasn't yet taken her vows, especially the one of chastity, and is a major babe in her form-fitting novice's habit.

I was going to write that the funniest character in the movie is the boys' former high school coach (R. Lee Ermey, a former Marine drill sergeant). It would be more accurate to say the same character would be funny in another movie, but is stopped cold by this one, even though the screenplay tries (for instance, when the boys ask Coach what to do with the kidnapped Judith, he replies, "kill her").

The lads don't idolize Neil Diamond merely in theory, but in the flesh, as well. Yes, Diamond himself appears in the film, kids himself, and sings a couple of songs. As a career decision, this ranks somewhere between being a good sport and professional suicide. Perhaps he should have reflected that director Dennis Dugan has directed two Adam Sandler movies (both better than this).

"Saving Silverman" is Jason Biggs' fourth appearance in a row in a dumb sex comedy (in descending order of quality, they are "American Pie," "Boys And Girls" and "Loser"). It is time for him to strike out in a new direction; the announcement that he will appear in "American Pie 2" does not promise that.

Steve Zahn and Jack Black are, in the right movies, splendid comedy actors; Zahn was wonderful in "Happy, Texas," and Jack Black stole his scenes in "High Fidelity" and "Jesus' Son." Here they have approximately the charm of Wilson, the soccer ball. Amanda Peet and Amanda Detmer do no harm, although Peet is too nice to play a woman this mean. Lee Ermey is on a planet of his own. As for Neil Diamond, "Saving Silverman" is his first appearance in a fiction film since "The Jazz Singer" (1980), and one can only marvel that he waited 20 years to appear in a second film, and found one even worse than his first one. 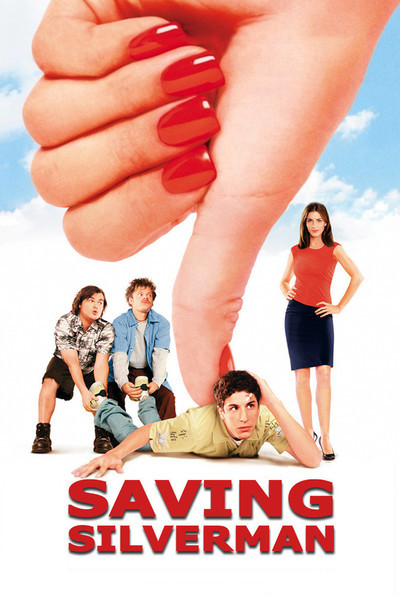