This relentlessly scabrous cartoon comedy—which, by the way, to anyone old enough to remember Ralph Bakshi, is not a “first” of any kind, not by a long shot—opens with a view of an empty parking lot with an arc-roofed mega-market in the background. Inside, the corn, the fruit, the condiments and especially the hot dogs and their neighboring buns, packaged for Fourth of July sales, sing a silly hymn about their hopes for being “chosen” by the “Gods” who will deliver them to “the Great Beyond.”

“Oh dear,” I thought. “Do Seth Rogen and Evan Goldberg want to be Trey Parker and Matt Stone now?”

Not really, it turns out—that song’s the only original in the movie. But given that the hot dogs and the buns then engage in an exchange of dirty talk that makes Cartman in “South Park: Bigger, Longer, and Uncut” sound like Joel Osteen, “Sausage Party,” directed by Greg Tiernan and Conrad Vernon from a script by Rogen, Goldberg, Ariel Shaffir and Kyle Hunter, with a story credit going to voice actor and executive producer Jonah Hill is spectacularly relentless in its profanity and sex talk and extends the metaphor of anthropomorphic groceries into territory you and I might not have even imagined. To wit, the movie’s villain, or rather, sole-non-human villain, is an extremely irate feminine hygiene product voiced by Nick Kroll.

Once in an interview the very humorous Kevin Smith said to me, “Comedy is so f**king subjective.” I have to be honest here and say the comedy of “Sausage Party” never really connected for me. I feel bad about this, because the voice cast contains not just super-talented actors but some friendly acquaintances who happen to be super-talented actors. “Maybe I’d like this if I still smoked weed,” I thought at one point. The movie’s prime mover, Rogen, is a doge of stoner humor, and he shows incredible discipline in this film by saving the first weed joke for twenty minutes in. I commend him for that. And I guess it’s kind of funny that "the imperishable”—three grocery items that let Rogen’s frank Frank in on the fact that the Gods and the Great Beyond are just myths, and outside the supermarket there’s only death and consumption—get their buzz by smoking out of a kazoo. But I dunno. Even when I did smoke weed, it was never my favorite thing. And the allegorical structuring of the grocery community—a nebbishy talking bagel and a goateed and belligerent piece of flatbread stand in for the Israeli/Palestinian conflict, for instance, and Nazi sauerkraut makes noises about eliminating “the Juice”—mostly struck me as an opportunistic ploy to get away with a lot of cruddy ethnic humor. The visual design of the picture was similarly crude and ugly, although the fact that one of the human characters looked as if he’d stepped out of a Peter Bagge comic panel gave me intimations that something a little sharper overall could have been accomplished, if only … well, again I dunno.

The movie picks up steam when a bunch of “chosen” franks meet their grisly fate—all save one, the stunted Barry (Michael Cera) who escapes and finds himself in the clutches of a druggie who, upon injecting himself with cooked-down bath salts (no really) is able to see into the fourth dimension and realize his food has consciousness. This concern with “transdimensional metaphysics,” as one of my colleagues called it in an after-screening discussion, removes the movie from the standard-issue-Bill-Maher-atheism direction I had thought it was going in. But again, I didn’t quite buy it. I did a lot of drugs back in the day, but in my brief exploration of psychedelics I never had the epiphany that mass-produced comestibles had sentience. Maybe it was just bad luck on my part. Once, while tripping at a weekend party in Connecticut, I had intimations of the cosmic while watching deer ticks explode from the heat on the patio of the house where I was staying. But never a talking bag of potato chips.

Anyway, this tack actually continues up until the film’s dénouement, the only portion of it to wrangle a chuckle out of me. Your mileage may vary, as they say. Also, hugs not drugs. 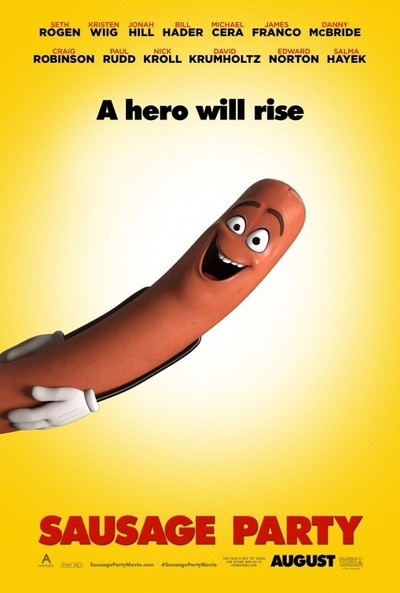